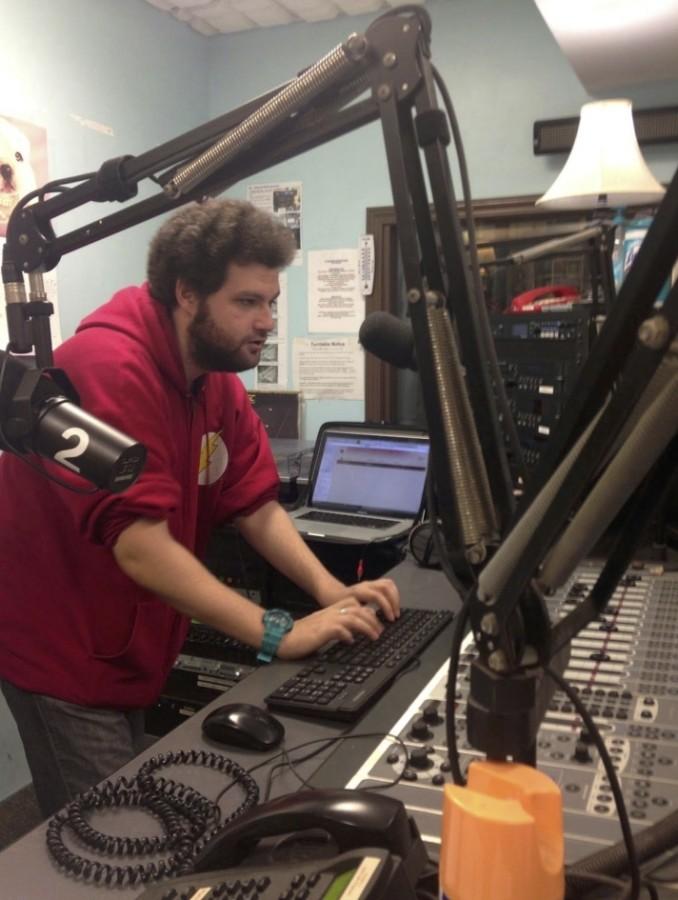 WRUW 91.1 FM hosts an eclectic group of shows, and the schedule changes regularly. To help you discover new shows to follow, we’re interviewing radio show hosts about their backgrounds and the concepts behind their programs. This week we talked to Perry “Wolfbrother” Wolfman, who hosts the show Jammin’ Jammz every Tuesday.

Chrismaly Vidal: How did you first get into being a programmer?

Perry Wolfman: “First semester at Cleveland Institute of Music was really busy, but by the second semester, I had gotten the hang of it and just came across the opportunity while sitting at Leutner. I thought it was the coolest thing ever because it wasn’t like classical music—not something that you were forced to do. I thought it would be an interesting way to have a hobby or something away from the school. There’s like some negativity and a lot of pressure that goes into our school, and I was trying to find a way to kind of relieve the stress and there you go. I fell in love with the station and after second semester sophomore year, I’ve been with it basically ever since.”

CV: How long have you be hosting ‘Jammin’ Jammz’?

PM: “Well I’ve been doing this show for the past two years. I took a semester off last semester because I was like ‘Oh, senior year’s going to be hard,’ and then this semester suddenly got really light. I was then like “let’s do it again! Let’s go out with a final bang, you know? Senior year, last semester. Why not?”

CV: Have you done any other shows?

PM: “I was an apprentice on Beatmatrix, which was a really great electronic show. They had a lot of drum and bass and house music. Like funk and groovy house rather than the generic ‘house.’”

CV: Tell us about your show.

PM: “The first half of this show, I’ve got this board right here and use it to spin on this program called ‘Traktor.’ This is a Traktor controlled S2 DJ controller. I’ll use this and basically will do 30 minutes of a mini-mix to open up the show with some Jammz for you [the listeners]. It’s basically one fluid back to back, musical electronic extravaganza. Then, every week I bring a guest on, give them a DJ name that represents who they are. For example, Laura [his guest of the week] is a vocalist as well. A junior at CIM with me and she’s a singer, but also in high school did Saber in Color Guard, so I called her Saber Singer.”

CV: Why the guest every week?

PM: “For a while I was DJ-ing with Beatmatrix after completing my apprenticeship with them. They kind of raised me with electronica music. While on their show, they would have a guest professional DJ who would spin. And I think, when I started my show, I wanted to tag team life events with people. Whether it’s parties or bike rides, whatever. I thought it’d be an interesting and fun way to twist up music. You can hear electronica music wherever but even I don’t know what’s coming on when they come on. It’s usually their first time on air but a lot of [CIM students], because they already know how to present themselves as musicians, can really speak as an orator.

CV: How do you usually approach people to be a guest?

PM: “I normally have specific people, close friends that I know even if I called them at 3 a.m. in the morning and asked them they’d be down. Also, normally the kids at CIM just stick to the school and don’t do anything, besides practice—and live, eat, drink and sleep. That’s it. So, when I bring CIM kids here, or any guest, they’re usually surprised. More the CIM kids because they have no idea that this is right in their backyard. It’s so close and such a good place to hang out.”