Japanese rapper Ryo Muranaka leaves everything to come to Cleveland 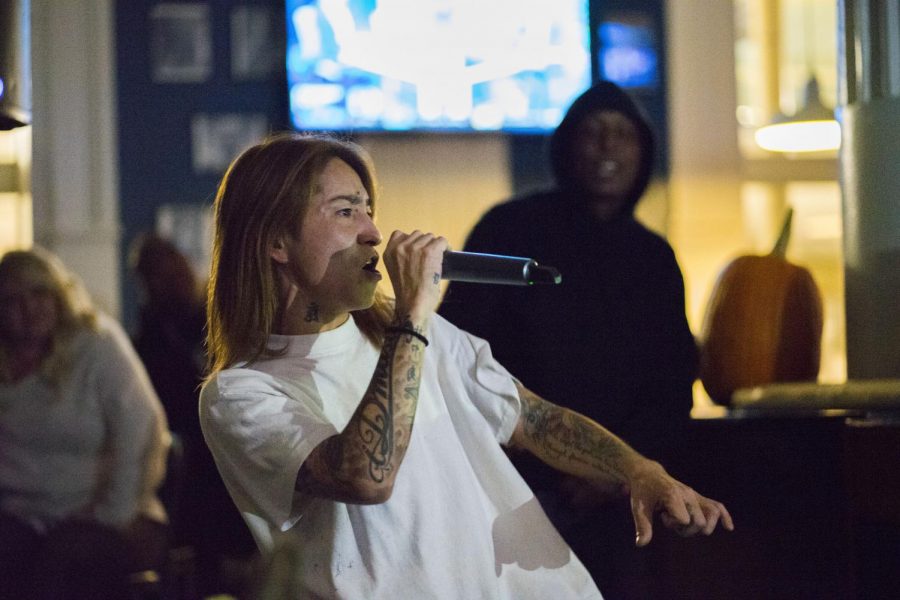 On June 22, Ryo Muranaka took a leap of faith. He sold all of his earthly belongings and booked a one-way ticket from Haneda Airport in Tokyo to Cleveland, Ohio with only his music, some luggage and a dream.

His dream was to meet the legendary Cleveland rap group, Bone Thugs-n-Harmony.

He spent two days homeless sleeping at East 99 and St. Clair, the intersection immortalized in the legendary ‘90s rap group’s second studio album, “E. 1999 Eternal,” waiting to meet his heroes. Muranaka, who goes by the rap name Shiba Dogg, initially went to the intersection because of an illustration on the back of the album cover. On the second day, he was robbed of his luggage and the gold chain around his neck.

Though Bone Thugs never showed up like Muranaka hoped, a parachute appeared right as he was about to faceplant. That parachute’s name was Howard.

Howard took Muranaka in for two days, giving him a place to sleep outside of the wet dangerous Cleveland streets. Then Howard, whose last name is unknown to Muranaka and his current friends, left to care for a relative.

Muranaka took another leap of faith, going around Cleveland and trying to find someone with a connection to his idols. He couldn’t remember where Howard lived, so again, he was homeless.

Then, after a day and a half, two more parachutes appeared, and their names were James Norton and Kwas Bibbs.

The police had been contacted about Muranaka. One of Bibbs’ cousins, a police officer for the Fifth District, called him about a Japanese rapper looking for Bone Thugs. Muranaka was found by a taxi driver who called the police when he couldn’t understand him. Instead of taking Muranaka to the police station, he got sent to Bibbs and Norton, who have sheltered him ever since.

“I said he can stay for one night,” said Norton. “One night turned into four months.”

Norton and Bibbs have connections to Bone Thugs-n-Harmony, and Muranaka has stayed with Bibbs for the past month after spending four months with Norton. They have taken care of Muranaka like he was a family member.

Norton had found a benign tumor shortly before taking in Muranaka. “God gave me a second chance at life,” said Norton. “Who am I to deny that to somebody else?”

This is Norton’s second time helping someone meet their idol. In the ‘90s, he helped Bone Thugs travel to California to meet Eazy-E from the pioneering group N.W.A. when they had dreams of making it big. The trip led to Bone Thugs signing with Eazy-E’s record label Ruthless Records.

On Saturday, Oct. 26, Muranaka made a small step toward that dream with a performance at the Jolly Scholar. Many friends of Bone Thugs and affiliates, such as rapper Stew Deez, the youngest brother of Layzie Bone, performed or were present at the events. People at the bar recognized Muranaka from his appearances on local news, leading to a chant of “Shiba Dogg” when he walked in. Jolly also brewed a special beer, the Shiba Dogg Ale, to commemorate the 31-year-old rapper. Muranaka’s enthusiasm shined even before he began his performance, as he danced and mouthed along to several songs spun by DJ No Request.

“It’s like the feeling you have when you are young,” said Muranaka through a translator when asked about his stay in Cleveland. “Everything is fresh.”

At the concert, Muranaka represented his new home and his old one. He wore a hoodie with the words “Cleveland The Land” across its chest that just covered up his neck tattoo of the word “dragon” written in oracle bone script. The tattoo marks the year he was born, 1988, which was the year of the dragon.

Muranaka performed three songs at the event, his second concert in the U.S after a show at Mahall’s five days earlier. His music showed Bone Thug’s influence, with melodic hooks paired with rapid-fire verses. His production is also unique in its blending of elements of electronic music and the classic hip-hop he loves. His energy as an artist was infectious as he jumped up and down, making wild hand gestures. Though the audience at Jolly couldn’t understand his lyrics, it didn’t matter. The energy and passion were enough for the crowd to fall in love with the music.

To English-speaking listeners, the first song Muranaka wrote in the U.S., “Gold Chain,” might seem like another party rap song, with the only English words being “whiskey,” “diamond,” “konnichiwa America,” and of course “gold chain.” The song is a reference not only to the danger he faced in Cleveland, referring to the chain that he lost when he was robbed, but a danger facing the entire world. Muranaka uses the chain as a metaphor to comment on how the extraction of Earth’s resources, like gold, for human greed is throwing nature out of balance and dooming the planet.

“It’s a bad idea to take all the resources from inside the Earth,” said Muranaka. “We should protect nature.”

Muranaka is inspired by the divine and tries to express spiritual messages in his songs. He is influenced by a variety of religious traditions. He often references Shiva, a deity who is most known in Hinduism but is also present in certain Japanese Buddhist traditions like Shingon Buddhism. In Japanese, Shiva is pronounced the same way as Shiba, the dog breed from which Muranaka takes his rapper’s alias. He has a tattoo of the Virgin Mary on his right arm, representing his blend of Eastern and Western traditions. For his first album cover, he plans to use an image of Shiva as a skeleton praying with a gold chain in one hand, a representation of how our world has fallen out of balance.

His first exposure to hip-hop was through fashion. When he was 11, he would shop at a hip-hop clothing store every day that would play a variety of artists, but the one that stuck was Bone Thugs-n-Harmony. What made Bone Thugs special to Muranaka was the harmonic aspect of the group—how several rappers came together to create a sound bigger than the sum of its parts.

“[Bone Thugs] are progressive. They talk about world understanding and acceptance,” said Norton. “[Muranaka] didn’t come here to sell dope. He came here for the message, to push positive.”

At age 15, Muranaka began rapping. Before he came to Cleveland, Muranaka had his own burgeoning career in Japan. He often performed live, and he called his own past rap group “Backbone,” as a nod to the group that inspired him. His name in the group was “Shiba Dogg, the Dog Bone.”

The group separated naturally after hosting several live shows. One of the older members is now in prison in Japan. Ever since the demise of “Backbone,” Muranaka has been a solo artist.

Muranaka said his friends and family, who own a coffee shop in Kyoto, all supported his trip to Cleveland to pursue his dream. Though his mother at first did not understand his love for hip-hop, she eventually came around.

“Go to America so I don’t worry,” said Muranaka’s mom in response to his plan, partially because of how an older member of his group got incarcerated.

One of the main reasons Muranaka left Japan was to leave its conservative, change-resistant culture.

“Over there, they look at what he’s doing as almost criminal ‘cause you’re introducing Western culture to a traditional system,” said Norton. “That’s why his mother felt that if he’s serious about this, if he’s willing to put his life on the line, that he would be better coming over here to do it.”

His mother facetimed Norton and Bibbs to check in on Muranaka, and after talking with them, she decided to let him stay in Cleveland.

“All I could say is konnichiwa,” said Norton. “She started smiling like yes, yes.”

Bibbs and Norton are honest about the perils of their neighborhood and said Muranaka has been exposed to the violence that pervades it. Layzie Bone, a member of Bone Thugs, sent Muranaka money for a hotel room, but the Japanese rapper refused to go to a hotel and leave his new family, so he used the money for food instead.

Muranaka left Japan to meet Bone Thugs, but he found something entirely different: a family. Bibbs said that now everyone in their neighborhood in Glenville knows Muranaka, and he is able to go to the store and other places by himself despite his limited English skills.

“At first we didn’t want him walking by himself through East Cleveland. Now he goes to the store and everyone knows him,” said Bibbs.

A looming risk is that Muranaka will be deported. His visa expired last month, and Bibbs and Norton are looking for an immigration lawyer to help him gain an artist visa to stay in the country in the long term. The Jolly performance is part of the solution as it shows that although he is here illegally, he is making a contribution to the Cleveland community. He appeared at Jolly a second time on Thursday Nov. 7, as a special guest for their karaoke night. The bar brought the Shiba Dogg Ale back on tap for his visit.

“More people in the neighborhood speak to him than speak to me now,” said Bibbs.

According to Bibbs and Norton, Muranaka is now a fixture in Cleveland’s East Side.

“Now that his face has been on the news, no one would dare do anything to him ‘cause there will be a whole city trying to find them,” said Bibbs. “Even though there’s a cultural difference and he can be a handful, at the end of the day, everyone can see his heart. I’m not talking about ‘I’m tough and I’m here and I’ve got big balls.’ I’m talking about his heart.”

For his part, Muranaka has sent many letters to President Donald Trump to try to receive support for getting an artist visa.

“I sent the feelings of my heart,” said Muranaka in his letters to the president.

“Even without speaking,” said Muranaka. “We’re connected at the heart.”

Special thanks to Mark Hornyak for providing translation services for two interviews with Muranaka.