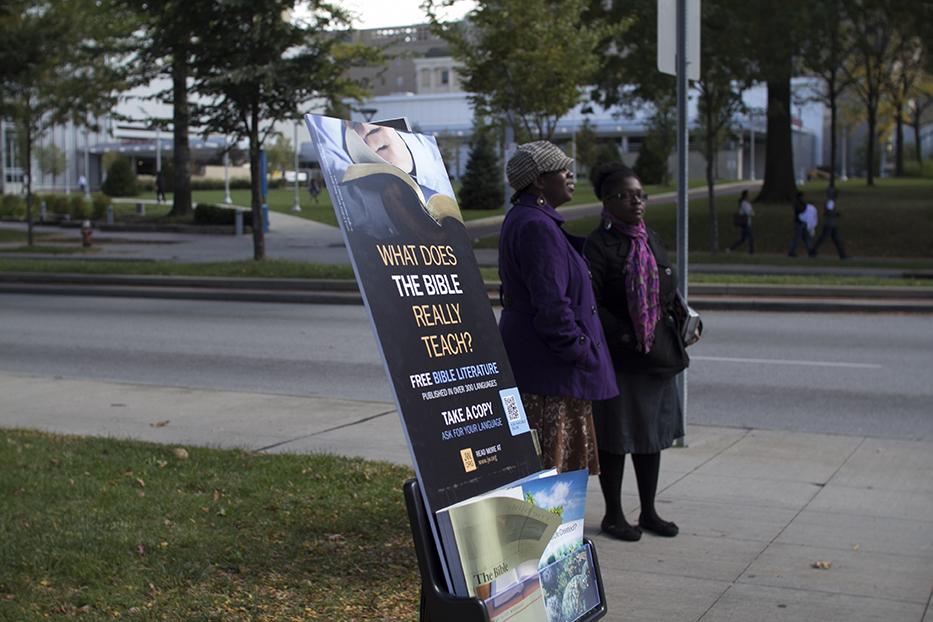 Members of the Jehovah’s Witnesses faith hand out Biblical literature near the corner of Aldebert and Euclid.

On the corner of Euclid and Adelbert, on an otherwise unimportant Thursday afternoon in September, two strangers stand on a little patch of sidewalk in front of Severance Hall, bringing with them a display full of fliers with titles like “The Truth About Halloween” and “What Does the Bible Really Teach?”

It is the perfect day to be outside— a light breeze ruffling through the trees, sunshine pouring lazily down onto the street, a hint of fall in the still-warm air— and the sidewalk next to Euclid is as busy as ever: masses of students gathering near the crosswalk every few minutes, waiting for a light to turn red so they can get to their next class. Most have noticed the stand— it’s seen in the laser-like determination and focus with which students are ignoring it. They walk or bike past the two volunteers a little more quickly than usual, avoiding eye contact. Though the two aren’t approaching anyone, it seems that the nature of the display alone is enough to create a sense of guardedness among passersby. It’s enough to make that little patch of sidewalk near Severance Hall invisible.

The two volunteers, and their stand, are part of a larger global initiative by Jehovah’s Witnesses, a Christian group that has over 15 million members worldwide. “Public Witnessing” is an initiative that originated in New York in 2011. Adapted by Jehovah’s Witnesses in Cleveland this past September, the goal of these displays is similar to that of the Witnesses’ more traditional door-to-door evangelism: to “acquaint people with the Bible’s message” and “provide access to free Bible literature and education.”

The Witnesses don’t hand out any fliers; they aren’t aggressive about advocating their faith. They’re simply present, stationing themselves in public places that get a lot of pedestrian traffic, available for questions. The literature provided is literature they study themselves, every week, in conjunction with the New World Translation of the Bible. Both the literature in the displays and the New World Translation used by individual congregations are published by the Watch Tower Bible and Tract Society of Pennsylvania, an organization founded by Jehovah’s Witnesses and headquartered in New York City.

As the days go by, the stand on Euclid Avenue remains— through colder weather, through periods of rain, through less-beautiful days. It’s an uneasy truce that exists between the students and the Witnesses. Different volunteers come and go: an older African American man, a younger woman with curly hair and a bright smile and a man who looks to be about in his 30s, dressed nicely in a yellow-brown tweed coat and blue button down. When asked, he introduces himself as Nathan. He’s willing to answer any questions, he says, but he has to go in a few minutes. His shift is about to start at Cleveland Clinic.

The first “Public Witnessing” stand in Cleveland was set up near the beginning of September, on the southwest quadrant of Public Square, across from the Tower City entrance. Plans for future locations include Payne Avenue in Asia Town, and Lorain Avenue near the Westside Market.