Johnson: Amanda Gorman: A ray of light during a dark time 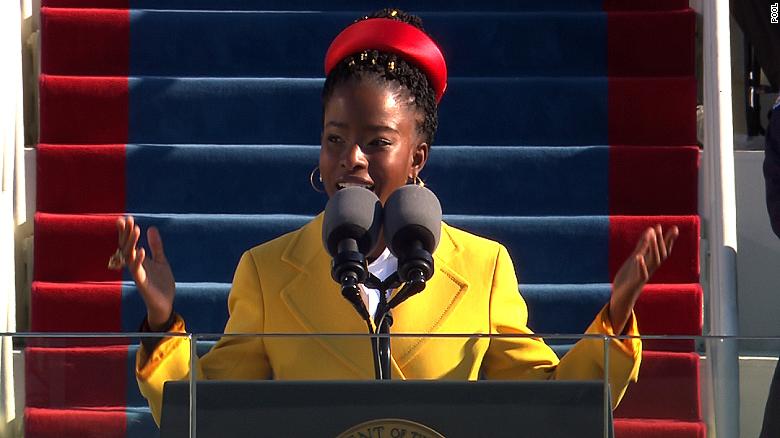 Amanda Gorman captured the stage on Inauguration Day with a poem capable of empowering and unifying a nation.

These concluding three lines in Amanda Gorman’s poem, “The Hill We Climb,” left the nation breathless and inspired on Jan. 20. I, for one, was sitting on my couch at home, tears streaming down my face with the knowledge and renewed hope that our country was off to a bright future, with women such as Gorman holding such profound influence.

As a college student, seeing Gorman, only a couple years older than I, hold such a high honor as poet laureate on Presidential Inauguration Day made me feel as though I could also accomplish whatever I wanted to: that there are no barriers keeping me from what I want to achieve. It also encouraged me to know that our country has evolved enough to allow people like Gorman, a young Black woman from Harvard College, to be involved in an event as sacred and beautiful as the inauguration.

Gorman’s influence was not only geared toward the nation’s youth, but to women across the country as a whole—especially Black women.

Black voices have been silenced for generations, and now, the voice of one Black woman has reverberated throughout the country and across the world: a shout and a call for unity in an otherwise broken country. And, perhaps most astonishingly, she did this at just 22 years old, as the youngest poet laureate in history.

Poetry has gotten a bad rap for quite some time; people assume it is stuffy and out-dated, complicated and unnecessary. However, Gorman showed the world that poetry is a prime way to reach into people’s hearts and affect change in a way little else does.

She renewed poetry’s beauty and gave many a new appreciation for it—so much so that she was given the honor of speaking before Super Bowl LV on Feb. 7. There has never been a poet speaker at the Super Bowl.

Moreover, her influence at the inauguration—that has since permeated to other spheres—is critical in society today. Two hundred years ago, she would not have been allowed on that stage. Today, she was not only allowed there, but held a privileged position and empowered people around the world with her words.

In her poem, Gorman herself reflected on the changes in the U.S., particularly for Black people, over the last few centuries.

“We, the successors of a country and a time where a skinny Black girl descended from slaves and raised by a single mother can dream of becoming president only to find herself reciting for one.”

While her words so eloquently captured the progress made over the last 400 years, she further emphasized that there is still significant injustice. After all, our country is still very flawed and divided.

“And, yes, we are far from polished, far from pristine, but that doesn’t mean we are striving to form a union that is perfect.”

Gorman underlined what still needs to be improved, while promoting hope for a better future, emphasizing that the story isn’t over. This optimism is something our country has been desperately hungering for, especially following the riots at the Capitol and the division within the government between the pro-Trump Republicans and literally everyone else.

However, Gorman did not make it political; she made it a beg for humanitarianism and a call for unity. She did not tell people they were wrong. She did not call out those with whom she disagreed. She remained poised, proud and courageous, looking for a way to bring opposition to agreement, polarization to unity, Republican and Democrat to one people.

There is certainly a tendency to become angry at others in a time such as this—one of great division. However, instead of fostering fury, she showed the country “fight might with right” and in this, she created a legacy for herself, for other Black women and for her generation.

I am certainly proud to be part of the same generation as Gorman.