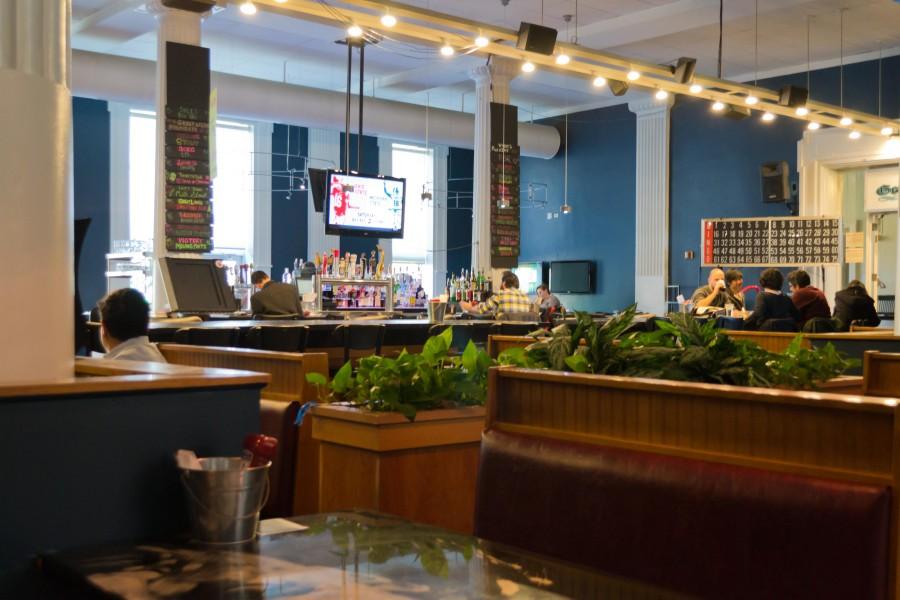 The Jolly Scholar aims to reach the campus community with events almost every night, and it will soon be opening its own brewery.

On Saturday, Feb. 27, The Jolly Scholar will celebrate its 11th year at Case Western Reserve University in true Jolly fashion: a “grandfather” beer night, featuring “the kinds of beer you might find in your grandfather’s refrigerator,” and a battle of the bands.

According to owner Matt Vann, before he opened Jolly, the space was a grab-and-go style restaurant. Then, when Jolly first opened, it had only wine and four varieties of beer. After a year, it got its liquor license. Two years after that, it moved from four beer taps to the 24 it has now.

Vann is proud of Jolly’s status as the main bar on CWRU’s campus, and he feels that there are benefits to being located in a school building.

“On some level I think it’s made it a little bit easier [for students to enjoy their time in Jolly], because so much of our customer base are students, and I think they like to come here and have a good time because we’re close and we’re comfortable,” said Vann. “But I think there’s always something in the back of their mind to say ‘take it easy, if you get in trouble here you might kind of be getting in trouble at school.’”

Vann works about 45 hours per week in Jolly, and he estimates an additional 20 hours doing work for the bar from home. Vann’s wife, Kim, used to work at Jolly often, but now she is down to once per week, on Sundays.

In addition, Vann’s parents, Candy and Tom Vann, run the Jolly’s catering. His children, a seven-year-old son and a five-year-old daughter, also work one hour per week in the Jolly, though they generally work from 10 a.m.-11 a.m., before the bar opens for the day.

Starting next year, Vann’s children, who are homeschooled, will also be working in a community garden to grow all of the basil and jalapeños for the restaurant.

Starting next month, the back corner of Jolly—which is currently swathed in black curtains—will begin producing batches of in-house beer. In that space, Jolly will be able to brew two kegs’ worth of beer in about five hours, though each batch will then need three weeks to ferment.

As early as the upcoming fall semester, Jolly will be using 2,000 square feet in Thwing’s basement to brew up to 4,000 kegs’ worth of beer per year.

When Vann brought the idea of brewing beer in-house to the university administration, he was sure that they were going to reject it. They had agreed to a liquor license and then to moving up to 24 taps, but he thought this would be where they drew the line.

“I totally thought this was going to be the one time they were like, ‘Ok, good try, buddy,” said Vann.

Going forward, Vann hopes to integrate the brewery into CWRU, with the University Farm growing hops and students in the chemistry department taking classes on how to ferment beer. In addition, he plans to allow students to experiment and create their own beers, which would then be available on tap, so students can invite their friends to Jolly to try the beer they made themselves.

An event every night

During Mondays in the football season, Jolly offers a deal on a pint and a bucket of wings. On Tuesdays it holds bar trivia. Currently, Vann said that “on Wednesdays we rest—or try to,” though moving forward that may not remain the case. On Thursdays every week Jolly holds karaoke and a graduate student happy hour. On Fridays Jolly offers both forties and tee-shirts for five dollars a piece. On Saturdays events vary. On Sundays all-you-can-eat wings are $9.99.

The tee-shirts on Fridays, a relatively recent addition to the lineup, have created massive demand, says Vann. The idea came out of the number of people who wanted to buy Jolly tee-shirts, even though at the time the Jolly had only the black shirts that staff were required to wear. Instead of ordering more and more staff shirts, Vann decided to order different shirts each week.

To up the ante, Vann has started assigning each shirt a power, “like Pokémon cards.” For example, students wearing the “Jolly Scholar for President” shirts on the nights of important political events can receive a discount.

Vann gets the ideas for Jolly’s events from a variety of sources, including the Jolly Facebook page’s news feed, which hovers at just under the 5,000 maximum number of friends an account can have. Some of them also come from activities in his day-to-day life, like going to the Pinewood Derby with his son’s Boy Scout troop.

From the latter source, he got the idea to rent a track and let students race homemade miniature cars—with prizes for the winners and those who had the foresight to bet on them.

“It’s probably the greatest strain on my brain of anything, trying to keep finding new things,” said Vann.