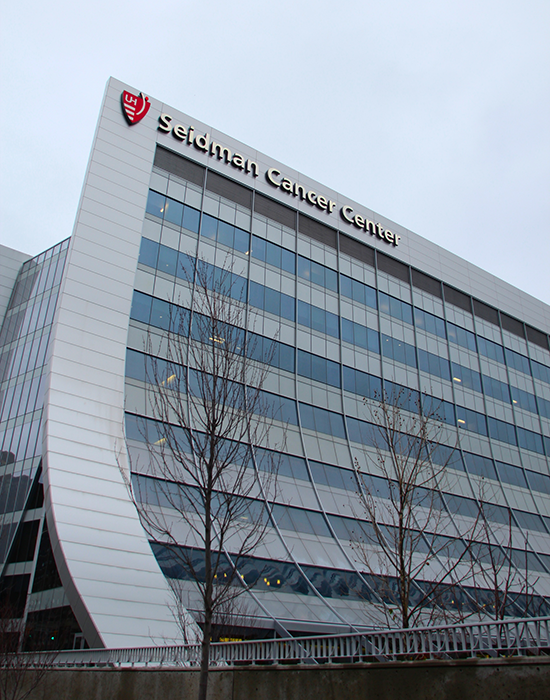 On a crisp day, a brown Mercury Milan pulls up to the Jane and Lee Seidman Cancer Center. The passenger struggles to open her door. She walks slowly past a line of three empty wheel chairs, and into the main lobby where valet cashier Joyce Watson greets her with understanding and a smile.

“I love my job,“ Joyce Watson says, “it’s not the pay, it’s not the people I work with; it’s the people I meet.” Watson sits in her corner booth wearing a white button-up, ladies tie, and black slacks. She is always in uniform. Copper highlights lace through her hair, neatly twisted into small braids that are pulled back into a bun. She wears long acrylic nails designed with copper and orange swirls.

Watson reaches into a drawer in her office in search of a prized possession: a carefully written card from Tammy, a past Seidman Center patient. The card held Watson’s favorite line: You brought me sunshine on gloomy days. Tammy and Watson would often smile and laugh together. Then the doctors told Tammy that treatment options had run out. Watson told her, “Now it’s God’s turn,” as Tammy laid on her and cried. Remembering that day, Watson says, “I believe that we are all positioned on this earth for a reason, and, I just kinda figured that my reason is to help people in Seidman Center.”

Cancer and adversity are not unfamiliar to Joyce Watson. On Feb. 14, 2010, her sister died of cancer. Eight months later, her brother passed away unexpectedly at age 40. And just one month ago she admitted her father to a nursing home. Her mother suffers from Alzheimer’s disease. No known cure exists. She even raised seven children by herself as a young mother because she says her husband was too addicted to drugs to help.

Yet her work attendance record and positive attitude exceed the expectations of her employers. Diplomas line her mantelpiece, grandchildren warm her heart, and her skin is practically free of wrinkles.

She smiles despite the hardship. Reflecting on her Pentecostal upbringing, she says, “It’s okay though, you know what I’m saying? I’m okay with this; I really am okay with this. It’s not me, God is doing this.”

Watson has been in the Seidman Center since it opened on Jun. 5, 2011. In previous years, she held various jobs that often go overlooked. She started out in a booth at lot 13 A, then moved to Lot 55, then to the cash register at Lerner Tower. She says she is grateful for the opportunity to work with cancer patients now. Her experiences help her recognize their hardships.

Among the lessons Watson learns each day, she says she never forgets the advice of her father: “Never believe everything you see, memorize it. And, if you see it again, recognize it.” She memorized her sister’s struggle with cancer and the emotions that came along with it. As cancer patients enter the hospital, she recognizes their struggle and understands.

Each day, Watson smiles at patients as they walk into the metallic and modern lobby of the cancer center. Each day, patients walk into the lobby asking Watson how much to pay, and many of them walk out asking her to pray.