Juggling to the extreme 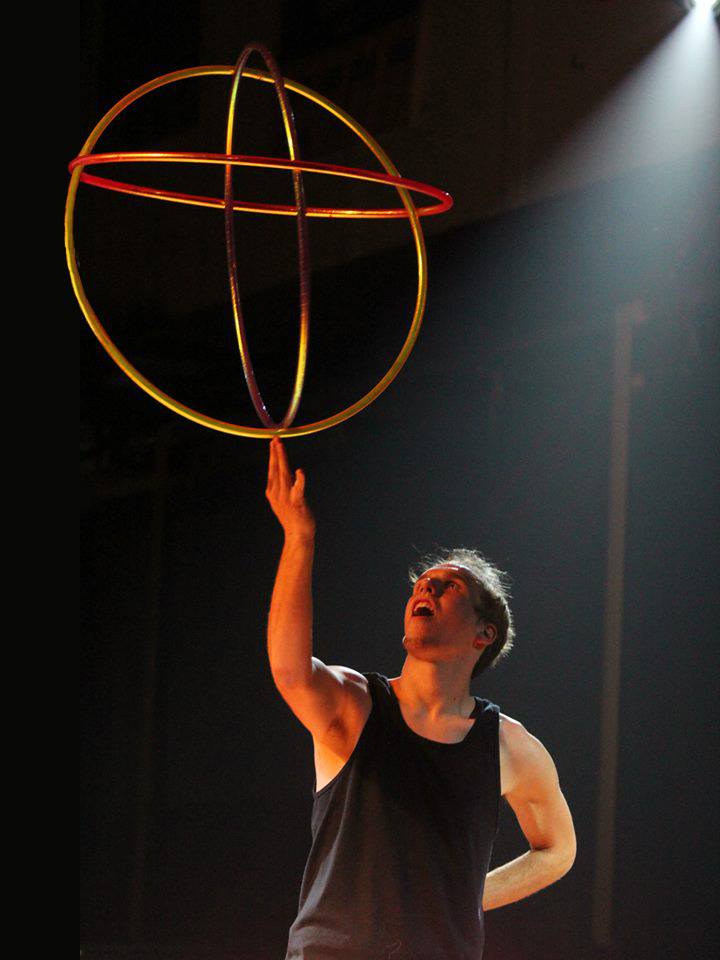 Benjamin Berry, hoop dancer and feature performer, claims the title of ringmaster as he skillfully balances a set of hoops on the tips of his fingers all the while staring in awe at his own feat.

The audience first got a taste of what was in store when the Master of Ceremonies (MC), Ben “The Viper” Holland, introduced them to contortionism. This part definitely wasn’t for the squeamish, as could be heard by the horrified gasps that ran through the audience when he dislocated his shoulder in order to fit through a tennis racket. Holland’s goal throughout his performances was to teach the audience about contortionism. Often telling the audience how he was doing everything, the experience was educational as well as entertaining.

The next performer was Case Juggling. This was the only performance in the show that really showed teamwork. Jugglers would toss the balls to each other, often adding in other tricks, such as standing behind each other or linking arms while juggling. Of course, once in awhile something would fall, but the group would quickly recover and continue. In addition to juggling, two performers used the diabolo, a traditional chinese toy. The diabolo is an hourglass shaped object that’s balanced on a string. The two jugglers passed the diabolo back and forth and showcased impressive solo tricks.

Next up was Kassandra Morrison with hoops. She added a dance element to her performance, and was extremely graceful. Morrison is from a small arts community in Akron, Ohio and has been practicing the hoops for five years. Her performance wasn’t perfect, but she recovered from the mishaps, which were few and far between.

Mike Moore, a performer from Canada with over 12 years of experience, followed Morrison with a new style of juggling that involved straighter lines and different techniques. Occasionally, Moore would propel the balls up by hitting them with his elbows and shoulders. Overall, he gave a great performance with an insight into other styles of juggling.

After another brief performance from the MC Ben Holland, Benjamin Berry stepped onto the stage. Berry won Hooping.org’s “Male Hooper of the Year 2015”  and was nominated for many others, including “Tutorial of the Year,” “Instructor of the Year,” as well as “Video of the Year.” Originally from Buffalo, New York, Berry hosts hooping workshops all over the country. At the show, Berry performed several tricks with hoops, including balancing them on his chin. What set him apart from the performers before him was the increased glamour and showmanship of his performance. He wasn’t afraid to be more feminine and expressive, and gave an impressive performance.

Chuck Clark, the next performer, did not lack showmanship. He began his performance by balancing a soccer ball on a rod in his mouth. The feats of balance continued, and eventually he was balancing on a plank of wood that was balancing on several cups which were on another plank of wood which was on a cylinder, creating a teeter-totter effect. Did that sentence feel like a lot? Imagine actually having to do it.

The next performer brought an element of light into his performance. Nick Thomas, a juggler from Detroit, Michigan debuted his new LED juggling light show. He juggled bowling pins that lit up with the music. The level of synchronicity and perfect rhythm that this performance must have taken is mind-blowing. Thomas was recently featured on ABC’s “The Gong Show.”

Experience pays off, as was shown by Matan Presberg, who has been juggling since he was six years old. On stage, he juggled an insane number of balls (too many to count) and did several impressive tricks with a lot of precision. It’s no wonder that he was voted number 13 on the list of Top 40 Jugglers of 2016.

Number 20 on the same list was Zak McAllister, who performed after Presberg. McAllister— winner of the People’s Choice at the International Jugglers’ Association’s 70th annual festival— had a completely different vibe, using more elements of storytelling and dance. He came onto stage with a radio and went on to juggle to the rhythm of different songs. His expressive face and 1940s feel added some comedy to the performance. Doing several tricks such as juggling behind his back, McAllister displayed impressive skill and showmanship.

It was an enjoyable way to spend a Saturday night.