Just in it for the halftime show

Watching the big game while not caring about football 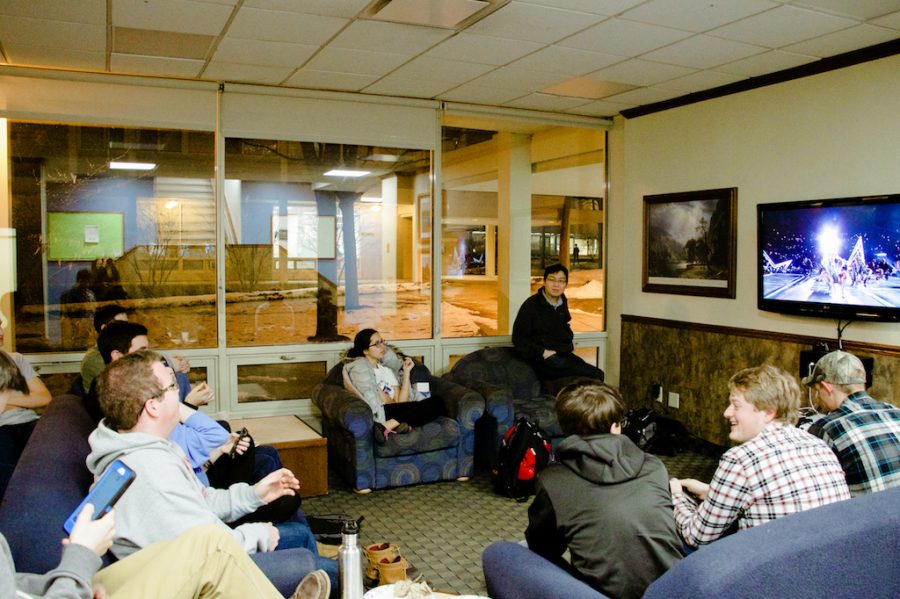 Students, no matter their interest in the game itself, gathered across campus to watch what some are calling the greatest Super Bowl ever.

Ed. Note: The Super Bowl is the most watched television program of the year. For the 2017 edition, 111.3 million Americans were watching at its peak. This figure dwarfs the 16.5 million people who watch an average NFL game. Some of the new viewers are likely casual football fans who only tune in when the championship is on the line. Most, I suspect, are people who don’t care at all about football or sports in general. They tune in because of various other reasons including the halftime show or top-of-the-line commercials. On this page are two perspectives of the Super Bowl: one from a weekly sports writer and one from someone who could not care less about sports.

Sports are definitely not my field of expertise, and I honestly don’t think I’ll ever be a football fan. But as I sat down to watch the pregame show, textbook on my lap to justify the time spent on the couch in front of the television, all I had was an outline of what was going on. I did know who Tom Brady was, but all I knew about him was that I didn’t want him to win.

Then the actresses who played the Schuyler Sisters in Hamilton: An American Musical came on the field to sing America, the Beautiful, and I started to think that maybe watching the game might actually be worth the effort. Military culture took center stage with the patriotic songs, and former President George H. W. Bush came out on the field to perform the coin toss.

The game itself was boring at the beginning. No one scored for the first quarter, and I didn’t know enough about the players to care every single time someone moved the football back and forth down the field. It started to get more interesting after that, and at the end of the second quarter, the Atlanta Falcons were winning. Half the people in the room were pumped, and the other half were waiting for the New England Patriots to come back.

The halftime show is probably the one part of the Super Bowl that I watch annually. Lady Gaga performed this year, and, in my opinion, it was awesome. Not quite as great as Bruno Mars and Beyoncé having a dance battle, but still up there as one of the top performances of all time.

After that, it was back to the game, and the status quo was mostly maintained throughout the third quarter, although the two teams both scored touchdowns. Things started to really heat up in the last quarter, as the tide turned rapidly. I had to stop pretending to multitask during the Patriots’ comeback.

Overall, the Super Bowl was pretty great. I didn’t quite know what was going on for most of it, but the Patriots were also losing for most of it, so I was happy. I wasn’t quite as emotionally involved in the game as the people around me were, but it wasn’t about the game. It was about the experience. It was about sitting with friends, eating food and laughing at commercials. It was about Lady Gaga and subtle political statements. Brady did win in the end, though. Nothing can be perfect.