K.Flay on a Tuesday

Mahall's gets chill with indie rap 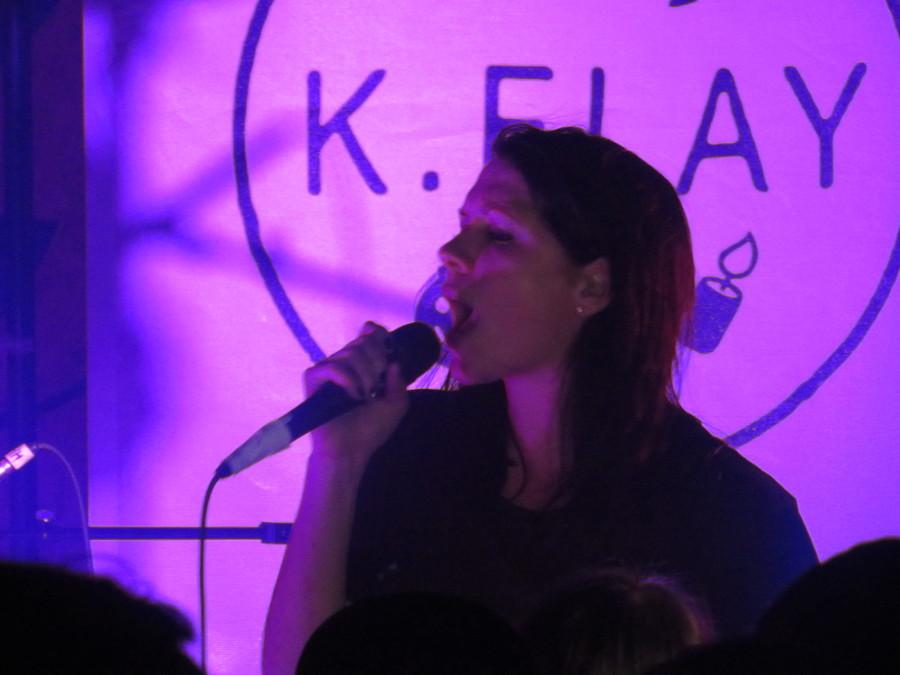 K.Flay performed to a packed house at Mahall's on Tuesday.

Tucked in the dark back room of Mahall’s 20 Lanes, a group of over 50 hipsters gathered on the evening of Oct. 14, waiting for indie rapper K.Flay to take the tiny stage.

Leather jackets, piercings, skinny jeans and flannel shirts were in abundance. Many of the hipsters sipped cheap beer out of mason jars. Some leaned against the wall; others sat at old wooden benches. Most stood, once the seats were taken.

The opener wasn’t as calm; Night Riots jumped around with energy on the platform/stage, their bubbly music filling the room. Each song brought indie, funk-influenced bubblegum rock, including the song “Into the Night,” which turned their image to a modern day hipster boy band.

And, like all boy bands, there were avid fans.

During Night Riots’ performance, a woman in the back of the room started dancing wildly, combining select dance moves from Michael Jackson, Lorde and Napoleon Dynamite. It’s a little difficult to describe, but basically, she was the epitome of the phrase “dance like no one’s watching.”

As the woman gyrated around the small open space, wearing a red leather jacket that looked like it was pulled from “Fight Club’s” Tyler Durden, Night Riots ended their set and the crowd stood around waiting for K.Flay to arrive in front of them.

K.Flay (aka, Kristine Flaherty, an alum of Stanford University) released her first album, “Like a Dog” in June of this year. Coming off of a Warped Tour-filled summer, her rap has spread in popularity even in the short period of time since the record’s release.

But, let me backtrack: It’s wrong to say K.Flay is just a rapper. Combining rock, metal, rap, indie, electronic and blues elements, Flaherty was a mixing pot of genres.

She was everything you wouldn’t expect, and even her outfit spoke against modern conceptions of female rappers. With an oversized t-shirt and a pair of jeans, very little makeup and no accessories, Flaherty brought the focus on her music, not her image.

When she emerged on the stage, the crowd immediately erupted. Green, blue and red lights flashed over fog, making Flaherty look like a ghost against the colorful background. The tiny stage, with just two banners on each side (both displaying K.Flay’s name) and the large “Mahall’s” backdrop, was bare except for Flaherty and her drummer Nick Suhr.

She launched straight into her first song, “Everyone I know,” with the entire audience bobbing their heads. Then, Flaherty transferred into “Fever,” and by the end of the song, her long black hair was already stringy with sweat.

In the back of the room, the solo dancer held her toes in the air, crunching her feet in tiny jerks during K.Flay’s “Thicker than Dust.”

And during “Wishing it Was You,” after singing the lyrics, “Sucking on a bottle of Jim Beam, wishing it was you,” Flaherty slugged back on a bottle of Jim Beam herself. The audience cheered her on as the whiskey spilled out onto her chest and she squinted her eyes shut, clearly not enjoying the experience as much as the audience in front of her. Afterwards, Flaherty bantered with the audience. “Kinda been a dangerous thing, doing this every night,” she said.

“Whiskey!” yelled a man in the middle of the audience.

Then, Flaherty changed the subject.

The entire room quieted, only to be interrupted by the same man yelling, with more emphasis this time, “WHISKEY!”

Though her attempts at emotional connection were lost on much of the audience, Flaherty still managed to captivate them.

During “Can’t Sleep,” she had the audience singing along against the drum, and the rhythm sped up on the backbeats, tapping away into a danceable tune. Meanwhile, the solo dancer in the back perched against a bench like a flamingo, bending around against the wall, doing her own thing, unlike the rest of the crowd which remained gathered in a mob in front of the stage.

By the end of the night, the room had been packed with at least 150 people, filling half the limit for the tiny Mahall’s stage. This probably wasn’t new for K.Flay, who has experienced many sold-out shows in the past few weeks.

K.Flay played “Turn it Around” last of all, calming things down for the night. The collective crowd bobbed up and down, and the solo dancer settled into a steady jive. When K.Flay finished up, she immediately stepped down from the stage at 12:20 a.m. on Wednesday, Oct. 15.

People left as chill as they came in, passing by merch tables and bands waiting to talk.

There were no chants for an encore, but everyone left smiling.