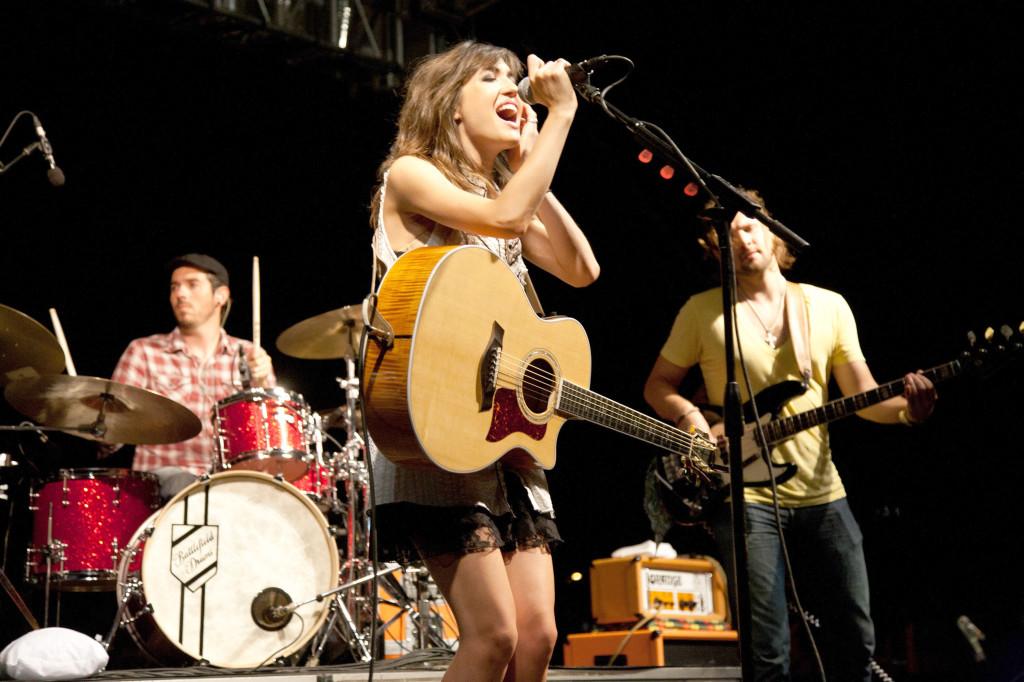 Nashville rocker Meagan McCormick opened the show. Her blend of dusky vocals and contemplative guitar-playing can be classified as “roots rock,” a sub-genre of rock with origins in folk and blues music. She gave a fiery performance, singing about such issues as desire and addiction, and easily gained the respect of the couple hundred students gathered on the lawn.

Sophomores Brad Aronson and Sean Suckys enjoyed McCormick to the extent that they had just purchased some of her merchandise after her set. “She was excellent. Very grungy but melodic,” said Aronson. Suckys agreed, “I really liked her ballads at the end. Usually ballads are really whiney, but hers were good.”

A horde of eager students began to make their way to the front of the stage for headliner Kate Voegele. Voegele, a Cleveland native, attended Miami University, where she majored in fine arts and psychology and pledged the Kappa Alpha Theta sorority before leaving to focus on her music career. After releasing a series of demos, she signed with Myspace and released her debut album, Don’t Look Away. Two years later, she released her sophomore record, A Fine Mess. Voegele’s main claim to fame, however, involved landing a recurring role on the teen drama behemoth One Tree Hill.

“I’ve been to a bunch of her shows. She has music for literally any mood,” UPB member Samiah Haque told me. “She really is amazing,” fellow UPB member Archana Kumar agreed. “She’s really interactive with her fans, too – she tweets back!” Despite such rave reviews, it was still easy to be skeptical as Voegele strutted on stage in red cowboy boots, cheered on in large by her fellow Theta sisters and a throng of smitten, fratty-looking dudes. Yes, she was hot. And yes, the crowd was going crazy. But could Kate Voegele really sing?

Any reservations disappeared about halfway through the show when she belted out a gutsy cover of Pat Benatar’s “Heartbreaker.” Voegele showed off her rocker chops and managed to kill the hook, successfully making the song her own. The rest of her set followed suit as she continued to hit all the right notes, and perhaps more importantly, sing with uninhibited conviction. She would sometimes preface her folk-pop songs with a few sentences on their meaning to her. “Wish You Were,” she explained, was about “falling for someone that turns out to be someone else.” “It ain’t hard to see who you are underneath / I’m still in love with who I wish you were / And I wish you were here,” she sang. Voegele’s simple yet poignant lyrics were immediately relatable, and quite a few students, female and male alike, shared the same sentiments, crooning along.

The highlight of the evening may have been when an elaborately made alligator balloon hat surfaced on stage. While the crowd encouraged Voegele to wear the hat during “Lift Me Up,” a tune about overcoming fear, she chose instead to pass the hat off to her keyboardist, asserting that she wouldn’t be able to take herself seriously with a toothy gator on her head. However, much to her audience’s delight, Voegele later emerged donning the alligator hat for an encore performance.

Voegele stayed on campus after the show to meet with her fans and later tweeted, “Thanks to Case Western Reserve University in Cleveland for such a fun show tonight! Love being home… you guys are badass!!!”