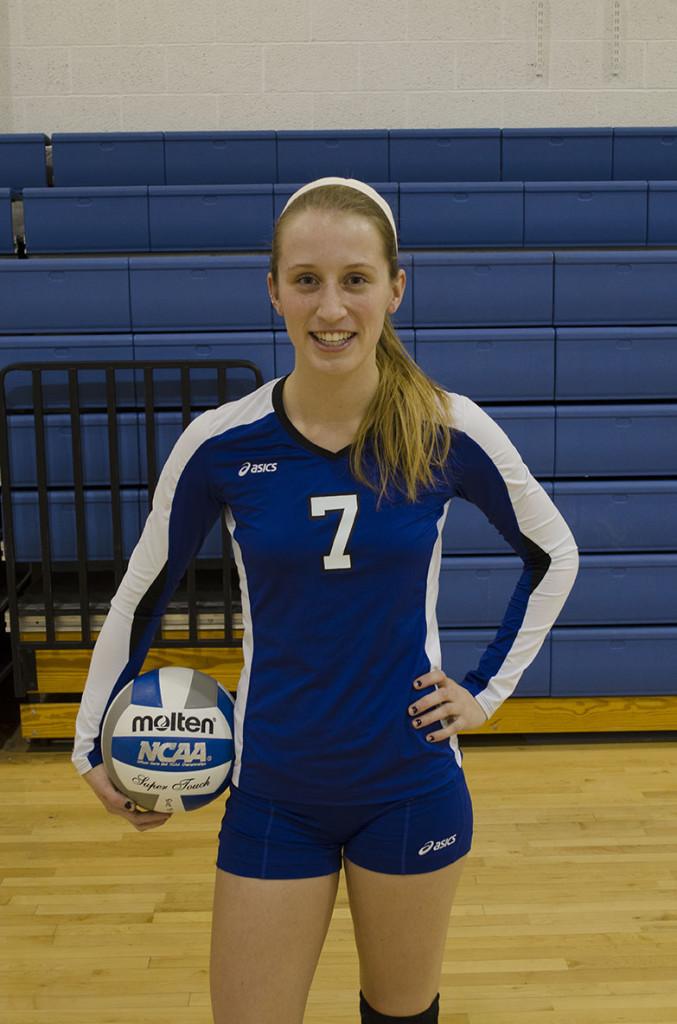 Katie Best is in her second season, her first as the team’s starting libero.

Sophomore defensive specialist Katie Best has had a lot of changes in her sophomore year at CWRU. Originally majoring in biomedical engineering, Best recently realized that she was truly passionate about biochemistry pre med. “Originally I thought I wanted to be an MD/PHD, a doctor that does research. That just seemed really appealing to me. But then last year I had the opportunity to do some research and I liked it but I realized I didn’t want to be stuck in a lab for my entire life. I really liked the medical aspect and I realized I didn’t really like the engineering aspect, so I thought I would pursue medicine.”

Best has also changed things up in her first year as a starter for the Spartan volleyball team. Last year, she competed in 16 sets, earning 42 digs. This year, Best tallied 538 digs in 116 sets and earned honors by making the All-University Athletic Association Volleyball Second Team for the year. She has also taken on the roles of social chair for the Case Association of Student Athletes and a tour guide for the Undergraduate Admissions office.

Best serves as an ambassador for the university as a tour guide and has good reason to speak on CWRU’s behalf to potential new students. When deciding on her future school, Best zeroed in on CWRU early. The BME program stood out among schools in the area and the volleyball team was an added bonus “I was contacted by coach Farrell and was really interested in the BME program here, it was a perfect fit. I came on a recruiting visit and had an opportunity to meet the team. I think meeting the girls and getting a chance to see the environment of the team and seeing that we aren’t just teammates, we’re friends and, more than that, we are family was a really big part of it for me.”

Best hasn’t regretted her decision to become a student athlete as her close group of friends on the team more than makes up for the lack of spare time. This feeling of team togetherness is what initially attracted her to volleyball when she was in elementary school. “There was a summer recreation program that started in fourth grade that was just something for me to do over the summer. I got immediately hooked. I had played softball but when I had to choose, it was always volleyball. I really like that there are six people on the court and in order for you to win the game, those six people have to move as one. It’s such a game of momentum.”

Best has played on school and club teams since she entered seventh grade and volleyball has continued to hold an important place in her life. The team needed her experience this year as they lost six seniors to graduation and had few veterans to take their places. Best and her returning teammates were called on to step up into those leadership roles. “We definitely have a different dynamic this year. We went from having this very strong base of leadership and now we had a lot of young players that had to step into areas of leadership. I didn’t play much last year but I came into this new role and I think it wasn’t just me, but pretty much every returner was called on to make as much of an impact as possible.”

Despite a difficult season of challenging opponents, the team definitely had some high points over the course of the season, which Best remembers fondly. “We didn’t have the best record this year but we played so many top ranked teams so I don’t think the success of our season was determined by what our ending record was. We had a very lively game at home and it was back and forth and we ended up having to go to a fifth set and we just came out and smoked them. That might have been a turning point for the season.”

The enthusiasm of team leaders is critical in these pivotal matches and any spectator of the team this year will acknowledge that Best and her fellow veterans exuded the motivation needed to encourage the team. While on the court or waiting on the sidelines, Best was always a positive presence. Head coach Karen Farrell was very impressed with Best’s growth over the season. “To step in such an important leadership role and be so consistent…as essentially a first-year player, from the beginning to the end of the season was really important to us as a team. She was a vocal leader as well as a leader by example. She has a tremendous work ethic and sets a good tone for what it takes to be successful.”

Best isn’t sure what her post-graduation plans are just yet. As a pre-med student, she has quite a bit of time left in the academic world before moving on. But she’s looking forward to working in her field as a doctor or potentially joining a world service organization like the Peace Corps to impact the greatest number of people.

Her focus right now is just enjoying her time at CWRU “I’m just soaking it all in…trying to do it all.” She will be sure to find a place in the world where her skills as a passionate leader and motivator can urge the world in a better direction.