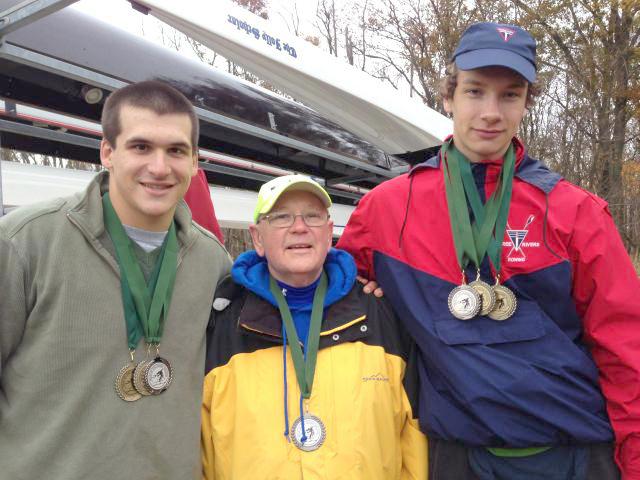 Klika was the faculty advisor for the rowing team. He is pictured above (center) with rowing team members Doug Brubaker (left) and Patrick DelBarbara (right). He even participated in some of their races.

The two trees framing Adelbert Hall somehow maintained their colorful plumage through the harsh winds of November, adding a beautiful autumn feel to the Veteran’s Day gathering of students, community members, faculty and staff. Many are decked out in service uniforms or wearing red, white and blue.

The university takes the opportunity to remember Kenneth Klika, associate dean of the College of Arts and Sciences, rowing faculty advisor and civil engineering professor, who died on Oct. 31 after a battle with pancreatic cancer. Klika served as a Marine in the First Aircraft Wing during the Vietnam conflict. He was memorialized by James Eller, the associate director for academic resources, who closed his tribute with a simple, “Semper Fi. Hoorah, my friend.”

Klika did not act like your typical 69-year-old. An avid rower, skydiver, competitive swimmer and motorcycle rider, his thirst for life never slowed down.

“He really showed me that you are never too old to do this kind of stuff,” said Patrick DelBarba, a senior who met Klika during his time in the CWRU Rowing Club.

As the rowing team’s faculty advisor, Klika was extremely involved in both the team and the sport itself. A latecomer to the sport, Klika first became interested in rowing during his time as a professor at the University of Akron before coming to CWRU. Using his knowledge of civil engineering, he helped Akron’s team create paper-thin concrete canoes, which the team then used in their races.

“He always had this interest in engineering and applied hydrodynamics,” said Aaron Marcovy, rowing team coach. “Rowing was a natural fit.”
Klika helped the team with administrative issues, putting them in contact with the right people to help solve any issues they had.

“He would advocate or us at every opportunity,” said Marcovy.

He also sometimes raced with the team, where he even won a medal at Cincinnati’s 2012 Head of the Hidden Dragon competition. Every January, he would join the team in seeing how much distance they could put on the indoor rowing machine in the month, completing more than 200 kilometers every year.

One of Klika’s main projects for the rowing team was helping to design them an indoor practice space. In collaboration with some civil engineering master’s students, Klika helped to design rowing tanks, giant, garage-sized buildings with pools and boats that rowers can practice in. He even travelled all the way to Seattle to pick up a component of the tanks.

“This kind of involvement is utterly unheard of,” said Marcovy. “For a faculty advisor to be this hands on.”

Klika brought the same level of commitment to his job as assistant dean, playing key roles in the creation of the SAGES Cafe and SAGES offices, as well as the planning of The Milton and Tamar Maltz Performing Arts Center at The Temple Tifereth—Israel. He was also an avid supporter of student veterans.

“Ken felt profound commitment to Case Western Reserve and the college,” College of Arts and Sciences Dean Cyrus Taylor said in The Daily’s obituary for Klika. “He loved
being on campus, being with students, and doing everything he could to improve our facilities and assist our young people.”

Even during his battle with cancer, Klika kept his upbeat spirit.

“We went to see him in the hospital,” said DelBarba. “I had given him a hat from the time I was training with a team in Philadelphia this summer. He was sitting there in his hospital gown wearing it when we walked in, happy as a clam.”

Klika’s friends and colleagues say that he will be remembered most for his loyalty.

“He was a proud member of the Marines, and their motto, Semper Fi, really defines him,” said Marcovy. Semper Fi, always faithful.

“As a team, we’re really at a loss,” said Marcovy. “I don’t know if anyone could ever fill the void that Ken left.”