Kim: Cory in the house

Booker stands out among 2020 candidates 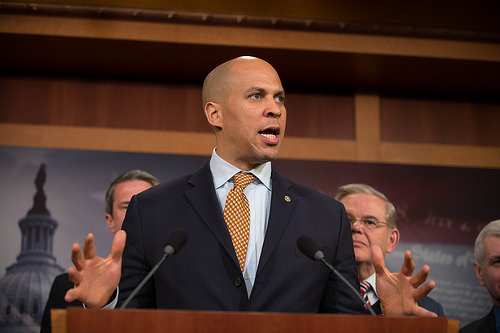 When I saw that Democratic Sen. Cory Booker announced his intention to run for the presidency in 2020, I was excited. It’s not because he grew up in Harrington Park, New Jersey, only miles away from where I went to high school. It’s only partially because I want the glorious pun that comes from the “Cory in the House” of Disney Channel fame. But mostly, I was excited because Booker is someone who has demonstrated time and time again that he cares about his constituents.

Booker, 49 years old, is the current New Jersey senator and a former mayor of Newark, New Jersey. He was born in Washington D.C. and traveled coast to coast during his education, going to Stanford University and Yale Law School. He is a Democrat, and someone once made a documentary about him. Booker does good deeds all around: opening his home up to strangers after Hurricane Sandy, saving dogs from the cold and even running into a burning house to save a woman. He has an aura around him that makes him seem like the kind-hearted protagonist of a novel.

Of course, Booker isn’t actually perfect. Opposers point to the Newark Watershed scandal, where allegations of corruption flew freely, and Booker was suspiciously absent in overseeing the Newark Watershed and Development Corporation. They can point out his lackluster results working as the mayor of Newark, when crime and taxes both increased during his years in office. They might even dig deep and talk about the op-ed he wrote as a student at Stanford University when he says that he groped someone when he was 15 years old. They might say he’s too focused on his public image.

Some of these arguments are valid. There never was a satisfactory ending to the Newark Watershed event, and the data shows that crimes and taxes rose. But if Booker becomes the President of the United States, he will be put in a position with a higher level of accountability than before, and the data about crime and taxes ignores how Booker helped boost economic and population growth. Regarding the op-ed, actually reading the article shows how he published it to provoke a conversation about how sex and coersion are linked together in society and to fight rape culture.

As for his public image, that is one of the core reasons I support Booker. Because of the president’s position as the head of the country, the general public looks to the president as a role model. Under President Donald Trump, the country became more openly hateful toward people of color, people of different religions than Christianity, LGBT people and other groups of people disliked by the president. Citizens of the country who harbored negative emotions felt free to act on them, and this even happened on Case Western Reserve University’s campus. I personally don’t think Booker acts just for publicity, as people don’t typically risk their life and health to save someone in a fire. Even if he does, Booker’s image as someone who cares for the minorities of America makes him a great candidate.

The American people deserve someone who cares about them after the hurt of these last several years.

Won Hee Kim is a third-year English major with minors in creative writing and economics.