Kinstler: The psychology of astrology 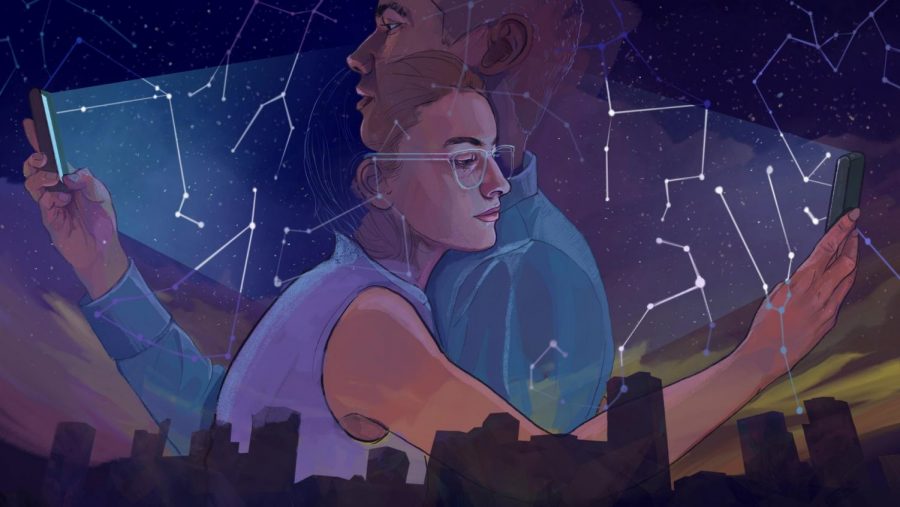 Courtesy of The Atlantic

Astrology can offer a positive psychological outlet, despite not being rooted in hard science.

What’s your star sign? I’m a Taurus sun, a Leo moon and a Leo rising. Have you ever had a tarot reading? Do you believe in astrology, numerology or tarot? It’s OK if you don’t. Now, I don’t subscribe to the belief system that just because I was born in May, and you were born in March, we can’t be friends, but I do believe that these pseudoscientific “theories” have therapeutic value.

Indulge me. Imagine, if you will, that you’ve just ended your long-distance relationship of two years after finding out your partner cheated on you. You don’t want to talk about it––perhaps you don’t even know how to feel, other than angry, scared and hurt. You’re so overwhelmed with emotions, you cannot even begin to work through your feelings and heal. Just for fun, your friend decides to give you a tarot reading.

Now, you’re a scientific person and, logically speaking, you know that there is no way that this deck of cards is somehow connected to your “aura.” You also know that your energy has not divined your destiny into these cards through some magic osmosis. And yet, you pick the card “Death,” a significant card which typically implies a major change to one’s life—perhaps the end of a relationship or interest—and also an increased sense of self-awareness. Immediately, you think of your recent breakup.

Let’s say you continue on and choose the Ace of Pentacles in the upright position—a card that signifies the need to start afresh. It represents the need for personal growth, introspection and a focus on one’s self. With this, you think about how long it’s been since you called your grandmother. You used to call her every night, but you’ve been so busy recently that any free time available was spent Facetiming your (former) significant other. You decide that after you get back to your dorm, you’re going to call your grandmother.

Finally, you draw the Three of Wands in the reversed position. Your friend tells you that, when reversed, this card signifies a roadblock or obstacle that inhibits you achieving some goal. Hearing this, you again think about your failed relationship and you feel the anger rising; two years wasted! However, your friend also tells you that the reversed Three of Wands serves as a reminder that the work you have put in was not in vain, but has helped you fortify your own sense of self. Now, you begin to think about all that you have learned in those two years—things you discovered about yourself, as well as things that are important to you in a relationship that you had not realized before. You think about communication and how your style of communication has changed, and most importantly, you think about how you’ve learned to prioritize your needs and compromise so that you can have a better relationship in the future.

So did you pick these cards because of some divine intervention? Or are the meanings assigned to these cards just vague enough that they can be applied to virtually any situation in a person’s life? Most likely the latter is true, but does that mean tarot has no value? No.

With this tarot reading, you have opened a dialogue with yourself and developed a way to think about your problems and work through some of your stress in a way you hadn’t considered before. Instead of fixating on your failures and stewing in your anger, the reading helped you change your point of view and adopt a growth mindset; one in which you focus on how you’ve grown rather than how you’ve failed. Had you talked to your therapist about the breakup, their goal during that session would have been virtually the same—to get you to open a dialogue in a way that you can begin working through your anger and frustration and eventually grow from the experience.

My point is not that you should hire your friend to be your therapist, or that tarot or astrology is a substitute for therapy. Rather, anything that you can find meaning in, or assign meaning to, can be therapeutic. Think of it as a placebo—even though there may not be any divine mysticism going on, there is still very real healing going on. Your reading has allowed you to begin the work of growing from your breakup, something you weren’t able to do before the reading.

Therefore, just because you’re an Aries and I’m a Taurus doesn’t mean that we can’t be friends. But, allegedly, the slow and steady nature of a Taurus doesn’t mix well with the chaotic and spontaneous nature of an Aries. Now that I know this information, instead of being passive-aggressive when you don’t respond to my Snapchat for six hours, I can explain that I’m the type of person who needs stability in my relationships, which means that I become flustered and stressed when we don’t communicate. Now, we can work together to grow our friendship, rather than have our relationship stagnate.

Again, my point is not that being an Aries tells me everything I need to know about you and therefore we shouldn’t be friends, but rather, knowing the astrology of your star sign has helped me work through this communication issue and changed my perspective on the situation, allowing our friendship to grow.

The crux of my argument is this: do I believe that the stars tell your future? No. Do I believe that if the stars can help us adopt a growth mindset, then there is value in our interpretations of them? Absolutely.