Kontaveit and Aoyama/Shibahara take championships at Tennis in the Land 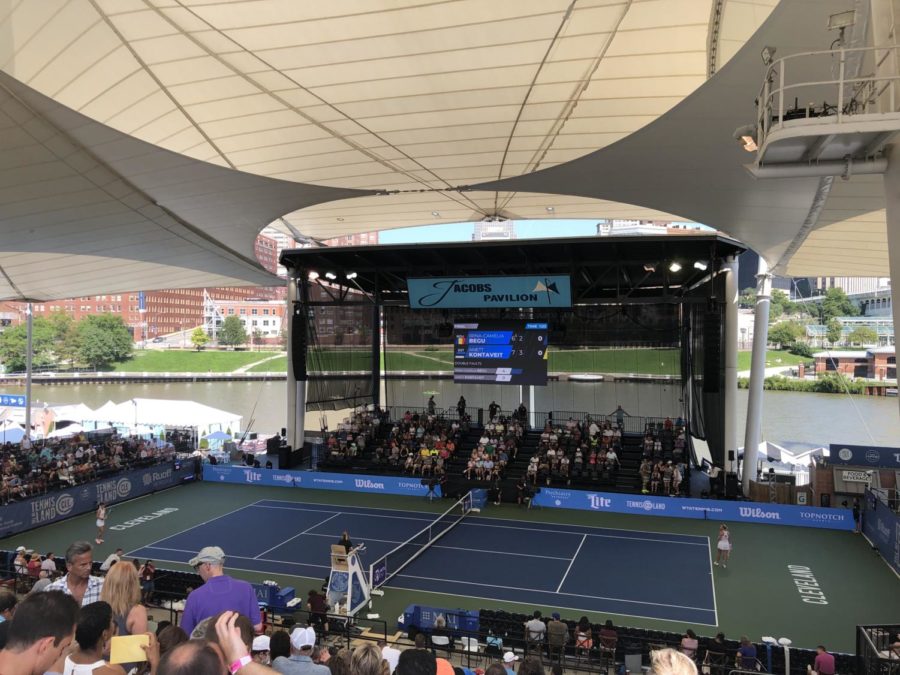 Irina-Camellia Begu and Anett Kontaveit play the in their second set of the singles finals at Jacob's Pavilion, overlooking the Cuyahoga River.

In the open air with the sunshine slipping in and basking the throngs of tennis fans across the crowded venue, the Tennis in the Land tournament held its inaugural singles and doubles finals this past Sunday afternoon.

The all-women’s tournament, which is one of three qualifying events for the U.S. Open Championships, spanned from Aug. 22-28. The event brought 48 top players from 15 different countries to showcase their incredible mastery of the sport at Jacobs Pavilion along the serene Cuyahoga River.

Cleveland boasts one of the biggest tennis communities in the country, with more than 20 recreational clubs spread throughout the city. Given that citizens of all ages and races are a part of this burgeoning sports community, it is only fulfilling that Cleveland finally has the chance to bring professional tennis talent to the people.

“It’s great to see this quality of tennis here,” said Richard, a Cleveland native and tennis aficionado at the singles final. “It’s the first time since 1985 that they’ve had a major tournament here in Cleveland. It’s fantastic.”

Topnotch Management, the company behind the event, announced the 2021 tournament in April of this year. This particular event has been about a year in the making, but the effort to bring tennis to Cleveland has been a longtime effort of the company’s leadership.

“Cleveland has never had an annual women’s sporting event of this level, and through the platform of the WTA Tour we can not only introduce the city to world-class tennis, but we can introduce the tennis world to the city of Cleveland,” said Kyle Ross—tournament director and Topnotch Management public relations chair— in a news release.

Promptly at 1 p.m., the singles final was underway. Romanian athlete Irina-Camelia Begu and Anett Kontaveit of Estonia took the court, prepared to battle for the championship. 31-year-old Begu was the more accomplished of the two, claiming four singles titles and nine doubles titles over her 16-year career. Though Kontaveit only had one singles title, she already possessed a high winning percentage of more than 65% at the young age of 25.

Within the first few games of the opening set, Kontaveit had a slight edge over Begu, even though every single game during the match was extremely close. Kontaveit almost appeared to be running away with the set after opening up with a 5-2 lead. In response, Begu launched a remarkable comeback campaign, tying the games 5-5 for the set.

In the next two games, both players were battling with such high intensity and skill. Rallies have become longer than the previous games, averaging more than eight hits. However, the players remained tied for the set at 6-6. The set moved into the tie-break round.

An epic competition more brilliant and quick than the rest of the set ensued. The ball was batted all over the court and the players moved at seemingly inhuman speeds. Following a flurry of volleys, Begu took the 2-1 lead after slipping the ball just over the net so that Kontaveit could not get to it in time. Kontaveit took immediate revenge, slamming the tennis ball down the middle of the court with no return from Begu. The round was tied 2-2.

The next few points entailed shorter rallies and neither player could sustain their run. With the round tied 5-5, Begu tried to respond to Kontaveit’s strong cross-court hit with a slice to get the ball barely over the net. This attempt failed, giving Kontaveit the 6-5 lead and setting up the set point.

After a rally consisting of almost 10 hits, Kontaveit pulled out the 7-5 victory in the tie-break round after Begu overshot the sideline by mere centimeters. With the victory, Kontaveit took the 1-0 set lead in the best-of-three match.

The second set had a sloppy start. Begu and Kontaveit were clearly fatigued from their lung-blasting tie-break round and this translated onto the court. The rallies were much shorter, lasting between 3-5 hits and littered with inexplicable errors.

After the first three games, Kontaveit emerged with a 2-1 lead. Following the changeover, Kontaveit burst with an unseen ferocity. On her returning hits, the tennis ball appeared to have been transformed into a cannonball. Begu did not have the speed nor the agility to keep up with such explosive hits and Kontaveit went up 3-1 for the set.

Begu, however, did have something which Kontaveit did not: a boisterous Romanian crowd. Cleveland has one of the largest Romanian populations in America and these fans showed up throughout the week to support Begu as she progressed through the rounds. The finals were no exception, and the frenzied fans proudly waving their home country’s flags were providing Begu with encouraging energy.

The crowd’s energy seemed to infuse Begu with confidence and she rocketed to a quick 40-15 lead in the fourth game. Kontaveit, however, slowly worked back to tie the game 40-40. Over the next five minutes, there was a back-and-forth as the two players bounced from having an advantage to retying it at 40-40. Finally, Kontaveit put too much force behind the ball and overshot the baseline. Begu inched closer to Kontaveit’s lead, making the set score 3-2.

Kontaveit swiftly took the next game. Double serve faults kept hurting Begu’s chances, giving up points to an already surging Kontaveit. In typical fashion of the match, just when it appeared that the momentum was on Kontaveit’s side, Begu came back with a challenging fire. Kontaveit’s lead was still kept on a leash at 4-3.

The eighth game was the turning point in the second set. Exhaustion was creeping in for Begu and her flailing attempts to keep up with Kontaveit’s powerful hits forced her to lob up high-arching shots. With her strength, Kontaveit struck these lobs to the far sides of the court, increasing her lead to 5-3.

Kontaveit never looked back and took the second set, and the singles title, with a 6-4 advantage. With this being her second career singles title, Kontaveit was ecstatic and full of joy about competing at Tennis in the Land.

“I’ve felt like home here in Cleveland, the welcome has been so warm,” Kontaveit said of the inaugural tournament during her trophy acceptance speech.

A little past 3 p.m., the crowd was buzzing with anticipation of the doubles final, the epic conclusion to the week-long tournament. This match was the most star-studded of the event. On one side, there was the impressive Japanese duo of 33-year-old Shuka Aoyama and 23-year-old Ena Shibahara. Combined, they have won 23 career doubles titles and currently rank ninth in the women’s tennis world doubles rankings.

Indian player Sania Mirza alongside American Christina McHale were Aoyama’s and Shibahara’s competition. McHale is a decent tennis player with three total titles in singles and doubles combined. The 23-year-old currently ranks No. 95 in the world doubles rankings. Mirza, meanwhile, is the most accomplished woman in this tournament and was perhaps the biggest draw of the finals. She has six total Grand Slam titles to her name, three each in doubles and mixed doubles, in addition to 46 career titles in singles, doubles and mixed doubles events. Mirza took maternity leave from early 2018 to the beginning of 2020, eventually competing in the 2020 Summer Olympics as well. Compared to Aoyama and Shibahara, who have been paired together for almost three years, Mirza and McHale only began playing together this past month.

As the pairs were introduced and walked to their sides of the court, there was a much greater uproar in the crowd as Mirza and McHale’s names were announced, obviously due to McHale being American and Mirza’s stardom. However, the true tennis fans knew that Aoyama and Shibahara were the team to beat.

The first set began and there was a stark difference in play compared to the singles final. Instead of the long, rhythmic rallies and the ball taking predictable paths across the court, the doubles match seemed more chaotic, cerebral and filled with more reflexive hits. All this comes with the team dynamics and there being an infinite number of ways the ball can be sent flying around the court.

In the first game, Mirza and McHale jumped out to a quick lead and outlasted the Japanese duo to get up 1-0. Aoyama and Shibahara responded with a perfect game to tie 1-1. This back-and-forth pattern ensued through the 10 games.

With both teams tied 5-5, Aoyama and Shibahara launched into a higher gear to spark a comeback in the 11th game. After being down 30-0, the competing pairs exchanged midair hits close to the net to tie it 40-40. Shibahara hit an overpowering, distant ball to the back of the court that neither McHale nor Mirza could reach. Aoyama and Shibahara took the lead 6-5.

The set point game began with Aoyama serving the ball. With impressive strength at a 5 foot 1 inch height, Aoyama struck the ball down the middle of the court in three consecutive serves with such quickness and height that Mirza and McHale could not physically reach high enough to return it each time. The Japanese duo bested Mirza and McHale in the first set with this 12th game victory, taking the 1-0 lead in the match.

For the second set, Aoyama and Shibahara’s momentum carried through and they built a 5-1 lead, with the seventh game being the set point. Mirza and McHale’s lack of chemistry was apparent: many of their mistakes came from spacing issues and miscommunication. This is not to say that the duo was incapable of playing together, they obviously had much success making it to the finals. Only in comparison to Aoyama and Shibahara’s synchronicity did they appear disjointed.

Surprisingly, Aoyama and Shibahara made several mental mistakes that gave Mirza and McHale hope. There was a rare instance of miscommunication as both Japanese players jumped to return a ball. Another two times, Shibahara and Aoyama each hit the net on attempted returns. The accumulating errors allowed Mirza and McHale to cut the lead to 5-3.

In the ninth game of the set, Shibahara used her quintessential long-distance power hit that sent the ball soaring above Mirza and McHale’s heads to seal the set and the championship. The win marked Aoyama’s 17th career doubles title and Shibahara’s eighth title.

Khushali Desai, a second-year at Case Western Reserve University, said that both finals were “very exciting matches and that provided great entertainment and brought together an incredible community of fans and sports enthusiasts alike.”

For the upcoming year, the Tennis in the Land tournament is slated to take place from Aug. 21-27. Topnotch Management has confirmed that the tournament will contractually remain in Cleveland for eight years total, with three of those years’ competitions being held at Jacobs Pavilion. Of course, Cleveland fans and event organizers hope to make this tournament a staple in Cleveland along with its three other highly successful professional sports teams.

“[Tennis in the Land] adds another dimension to Cleveland sports culture,” Richard added. “Cleveland has a great tennis community and I think it is great to bring this [tournament] here… I hope it carries on.”

In the meantime, the U.S. Open Tennis Tournament has already begun and spans from Aug. 24 to Sept. 12. Kontaveit, Begu, Aoyama, Shibahara, Mirza and McHale will all be participating in their respective competitions. Puneet Bansal/The Observer