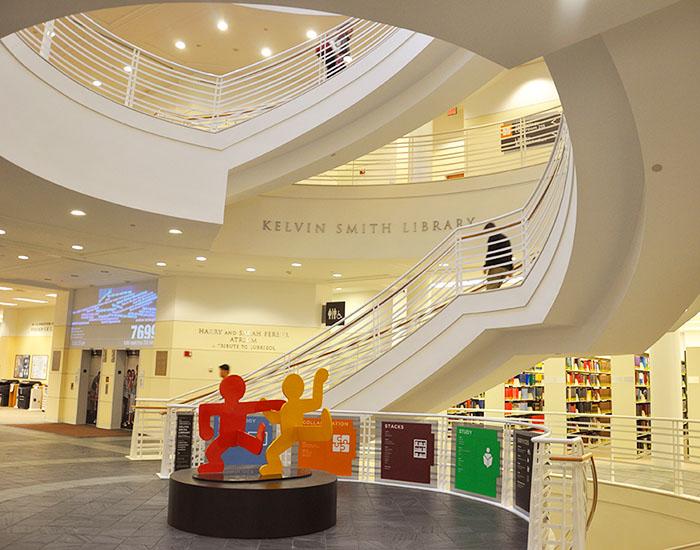 As more and more students begin to study for midterms, the student population of the Kelvin Smith Library has grown exponentially. Undeniably, KSL is an important part of the campus, and, thanks to a five million dollar endowment, it will become even more useful to students in the years to come.

This gift, which came from a donor who wished to remain anonymous, is the largest gift in KSL’s history. Though the library was initially notified of the gift two years ago, there were some issues with receiving it, so the library postponed announcing the endowment until it was certain that the gift was coming in full. Upon hearing of the full gift, library directors were thrilled.

“I was elated. I was very gratified,” said associate provost and university librarian Arnold Hirshon. “I was very happy for the library and the university. I thought this was a great recognition of the work that this library has done for many years, and continues to do.”

This substantial endowment was given without any regulations on how it is spent. An unrestricted gift of such size has made the library feel the burden of financial responsibility.

“We’re stewards of a gift, of spending that money in a responsible way, so there’s a lot of responsibility that comes with that,” said Hirshon. “Because it’s an unrestricted gift, we will decide annually what the exact distribution will be. I’m confident that we will spend it quite wisely, and that people will be seeing a lot of benefit from it for many, many years to come.”

The gift is structured as an endowment, meaning that KSL has access to the annual interest of the endowment, which is roughly five percent, or approximately $250,000 per year, starting with the next fiscal year. Due to the lack of stipulations, there are many possibilities for how this money will be spent, but Hirshon stated that the library has certain priorities in spending the money that will be followed.

“We have many, many needs in the library,” said Hirshon. “Certainly for this year, and for the next few years, the highest priority will be contributing towards the purchase of more library materials, such as books and journals.”

Other priorities of the library include “growing work in digital scholarship and redefining some of the work of the Freedman Center,” as well as “renovating the library, keeping the facility up, and modifying it to meet the changing needs of students,” according to Hirshon.

Hirshon also mentioned other ways the money might be spent, such as using some of the interest from the endowment to match a separate gift that was given on a matching basis, or possibly if student government were to request a certain space or service within the library for an important event.

Ultimately, though, said Hirshon, the students of CWRU will benefit the most from this generous endowment.

“First of all, any expansion of content and making more books and journals available on campus is always a benefit to both our undergraduate students as well as our graduate students.

“In digital scholarship, a lot of those services are services used by students, so anything we can do to help make it easier for students to use digital information and create new forms of knowledge through the services we can provide can be a direct benefit.”

“All of those things are a direct benefit to students. The students will benefit. That’s what we’re here for.”