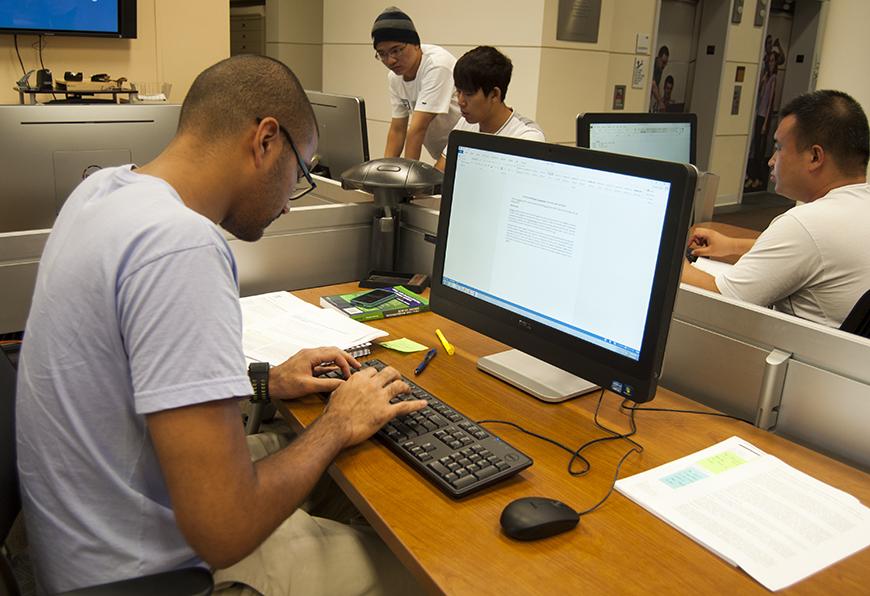 A student utilizes one of Kelvin Smith Library’s 34 new Dell computers. The machines were upgraded this summer after a half decade of use.

In the typically subdued atmosphere of the Kelvin Smith Library, spontaneous cries of joy from students are, to say the least, unexpected. Yet in this second week of classes, that’s exactly what has been happening. Students from all across campus have been celebrating: fifth years letting out hastily muffled shouts of elation; humanities majors fist-pumping excitedly; computer programmers having silent paroxysms of delight behind their desks.

The cause? Thirty-four new Dell computers.

“It’s been six or seven years since the last computer refresh,” Roger Zender, digital learning and scholarship team leader at the KSL library, said. “[Buying new computers] is a part of our standard operating budget.”

Why now? The KSL staff knows it’s time to recycle old machines when they start getting complaints from students. By this time last year, Zender said, “We were getting a lot of complaints.”

The OptiPlex 9010 All-in-One computer comes equipped with all kinds of shiny new features: an Intel Pentium Dual Core Processor, an up to 1000GB SATA hard drive and a new operating system—Windows 7 Pro. There’s no longer a separate CPU tower—it’s built into the 23-inch HD screen. But what are students probably most excited about? The speed.

The OptiPlex’s 4GB of RAM means that it’s not just fast—it’s faster. Technologically literate or not, most can appreciate the functionality of these new computers. Updated browsers allow for non-glitchy usage of online programs, such as Google Apps for Education. Videos get shown on a high-definition screen that’s 6 inches bigger. And every computer now runs both Microsoft Office 2013 and Adobe Creative Suite.

Zender is looking forward to the possibilities the new computers will bring to students. The staff at KSL has recently been trying to bring more technological capacity for students onto the main floor of the library and out of the Freedman Center. Will a more media rich library make for a better education? Who knows. Professors and students are still adapting to and exploring the capabilities of technology in the classroom. Regardless, one thing remains certain: students are going to enjoy these new computers while they last.