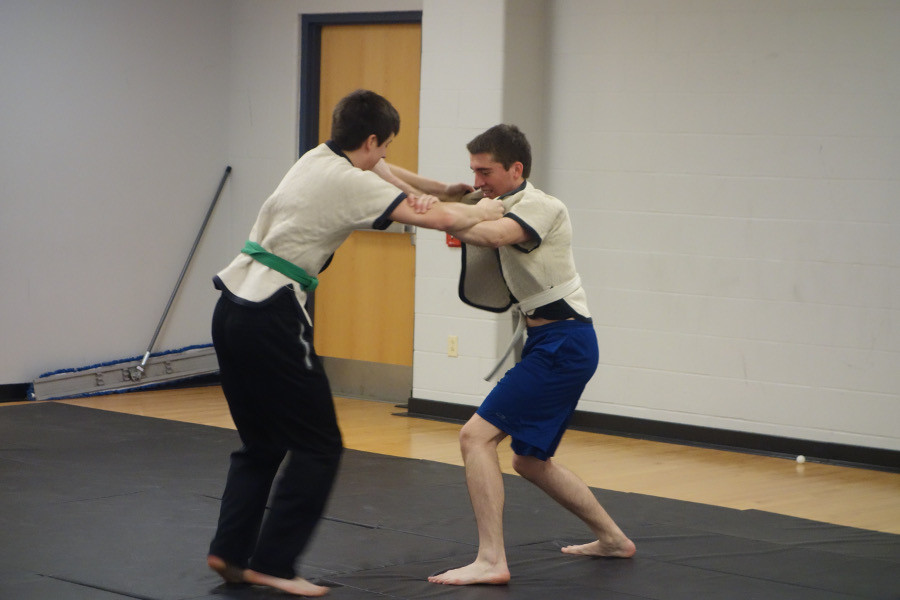 The Case Kung Fu team practices their martial art, training their body, mind, and soul. The team has had great success both internally and internationally for perfecting this balance with both beginners and experts.

Ninjas roam the campus of Case Western Reserve University. Ninjas, the masters of disguise that they are, blend in with regular CWRU students because, well, they are students.

They are not just any students; they are members of the Case Kung Fu Club. A tight-knit community comprised of current students, instructors and an advisor, Case Kung Fu Club takes the most inexperienced and “unathletic” members and pushes them to learn as much of the martial art as possible.

“Most of the people that we get here actually have never done any martial art before,” said Club Advisor and Main Instructor James Van Doren. Club President Alice Li echoed this statement, saying “We have a wide variety of backgrounds from the very experienced to the inexperienced.”

The contrast can especially be seen at the end of a practice when students split up into groups based on skill level to practice forms for their next belt test. The largest group, the beginners, works on the basics, while the more experienced students nearing their black belt test fine tune their complicated forms, including many sweeps and kicks typical of what a layman thinks of kung fu.

Do not think for one second that the club ignores its new members. Van Doren spends the most time with them, always encouraging them and correcting them by guiding them through movements, breaking down complicated moves into simple movements. The more experienced members verbally encourage them throughout the practice because they want to see their friends succeed. “This is a journey that lots of people take and they follow in each other’s footsteps,” said Van Doren. Remembering their own early struggles, more experienced members make sure to support their kung fu brethren.

The club takes members who believe they are not coordinated, as many people on campus claim to be, and turns them into athletes. “We get everybody up to a competitive level in a really fast amount of time without being crazy serious. You push them a lot to find their own boundaries and then they set new boundaries for themselves,” said Van Doren. “It’s exciting to see people who aren’t coordinated become athletes and win medals.”

The transformation is due in part to the rigorous workout at the beginning of practice before the training begins. Pushups, up-downs and intense core exercises make up the more intense parts of the warm up. “I’m in better shape than I was a year ago; it’s actually pretty cool how that happens,” explained Secretary Mike Novet. Ninety minutes of practicing kicks, punches and forms three times a week will get most people in shape, especially since forms can be held for minutes at a time.
Interestingly the club does not train in a traditional martial arts space. Concrete walls and a hard wooden floor lit by tubes of fluorescent lights, with echoes of a Spirit Squad practice as background sounds does not describe a typical kwoon, or a martial arts training hall. The club mixes traditional practices with more relaxed practices. The testing system is organized around the traditional curriculum and students bow and ask for permission to enter practice late.

However students talk through their week during the early stretching, relaying information about upcoming test or other groups they are involved in. Van Doren allows conversation between members as they are practicing techniques, including day-to-day conversation and advice on the current maneuver.

The casual atmosphere is relaxing for members, as in addition to training the body, they are also training their mind and soul. Northern shaolin, the group’s style of kung fu, stresses these other aspects of the discipline. While teaching maneuvers, Van Doren often informs students about how the move is affecting joints which in turn affects the opponent’s appendages. Composure and perseverance are both taught in the kwoon through the intense workout and the forms practice. Students must learn to stay composed; otherwise their form breaks, and they must regain it.

The group’s closeness extends beyond practices and into the real world. After practices most students stick around and discuss things like “Dragon Ball Z.” A quick scroll through the club’s Facebook page reveals members from many past years liking posts about current students. The posts are generally about achievements at the various competitions the group competes in.

Case Kung Fu recently sent seven members to the Warrior Spirit Challenge in Windsor, Ontario, Canada, where the team captured second place in the shuai chiao competition, a form of grappling, and most members of the team earned at least one medal. The club sends members to one tournament per semester, the other one being shuai chiao national championships held in Ohio. In addition to these tournaments, Case Kung Fu Club annually has members compete as part of the United States Shuai Chiao team in China and Italy at the world championships. One of those members, Elanor Drushel, has been a part of the club for seven years and still instructs at practices.

Even though Case Kung Fu has a lot to do with fighting, they are one of the closest-knit groups on campus.