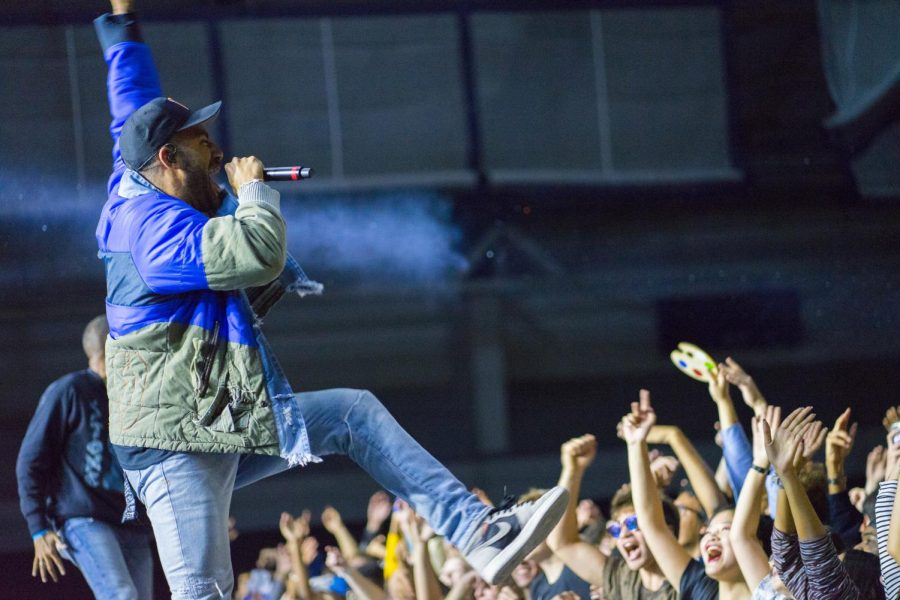 KYLE, best known for his hit "iSpy," caused the crowd at Veale to erupt with energy.

Fresh from releasing the deluxe version of his debut album “Light of Mine” earlier this year, rapper KYLE (born Kyle Harvey) performed at University Program Board (UPB)’s Fall Concert on Nov. 2.

“Although we didn’t suggest to DJ Hydra that he include other artists in his set, we were definitely thrilled that he did,” third-year student and UPB Director of Concerts Katy Stegemann said. “I think above all, it points to a cohesive and collaborative community of student musicians that are supportive of each other.”

DJ Hydra started his set with his song, “Weird Flex but Okay,” demonstrating his singing ability paired with mixing talents, with Gwen singing “Want Your Love” next.

After a DJ set, A.N.I, 4upz and MIHA performed the rap song “Light Show,” followed up by “Blizzard & Fall Asleep” with ЯIA. DJ Hydra finished with a solo song, “Okay,” before inviting all the openers onstage once more.

By the time KYLE made his way onto the stage, the crowd was hype and he launched into his songs “Hey Julie!” and “SUPERDUPERKYLE.”

“Hey Julie!” actually introduced KYLE to the popular app TikTok. “I’m at my mom’s house and my little brother was on TikTok and “Hey Julie!” comes up and I see kids dancing to it,” KYLE said. “So I went on and tried to learn the dance myself, and after that, I started seeing how genuinely funny this shit is and so I just started making some funny videos and last one I posted went crazy, that shit got like seven million views.”

After his second song, KYLE explained that he has been performing at college campuses all over the country and ranking them by their energy. “Right now, you’re like top five,” he said.

He sang “Playinwitme” next and the familiarity of the song roused the crowd, bumping us to top three.

“I believe in [your chance of #1 college campus in the nation],” he said. “But the question is, ‘do y’all believe in yourselves?’” He compared the crowd to former basketball player Paul Pierce, but asserted we had Kobe Bryant potential.

KYLE also performed his songs “Doubt It” and “Games.” Reminiscent of the latter song was the chain that hung around his neck, a large, glittering GameBoy.

As the concert occurred just two days after Halloween, many students were dressed in costume, including Bob Ross, who KYLE invited to the stage to show him Case Western Reserve University was the “most turnt up school in the USA.”

“This was my first time dressing up for fall concert,” Bob Ross, otherwise known as third-year student Keeyon Hajjafar, said. “And I thought, [KYLE is going to invite me onstage] and it did [happen].”

Although not costumed onstage, KYLE dressed up as a soldier and James West from “Wild Wild West” this past Halloween. “I was Will Smith and my girlfriend was Salma Hayek,” he said.

KYLE marks the third rap artist in my three years to headline the fall concert, along with ASAP Ferg and Amine, and was highly requested by students. “We thought he would make for a high energy and engaging fall concert artist, so he was definitely our first choice and we’re happy we could make it happen,” Stegemann said.

Second-year student Yugan Sakthi agrees. “I loved his positive energy,” he said. “[KYLE] had an entertaining and hilarious stage presence that matched the good vibes of his songs.”

KYLE seemed to enjoy himself as well. “I feel like people in Cleveland are really nice and pretty much always had fun here,” he said.

Kid Cudi, a huge inspiration for KYLE’s music, grew up in Shaker Heights, about 15 minutes away from campus. “He was the first person that inspired me to make music to help people,” KYLE said. “It was kind of like Kid Cudi’s music was the superhero blueprint for what I ended up becoming.”

As KYLE closed with the song that catalysted his fame, “iSpy,” we were still in second place. Despite this minor disappointment, the concert was a great experience for all attendees.