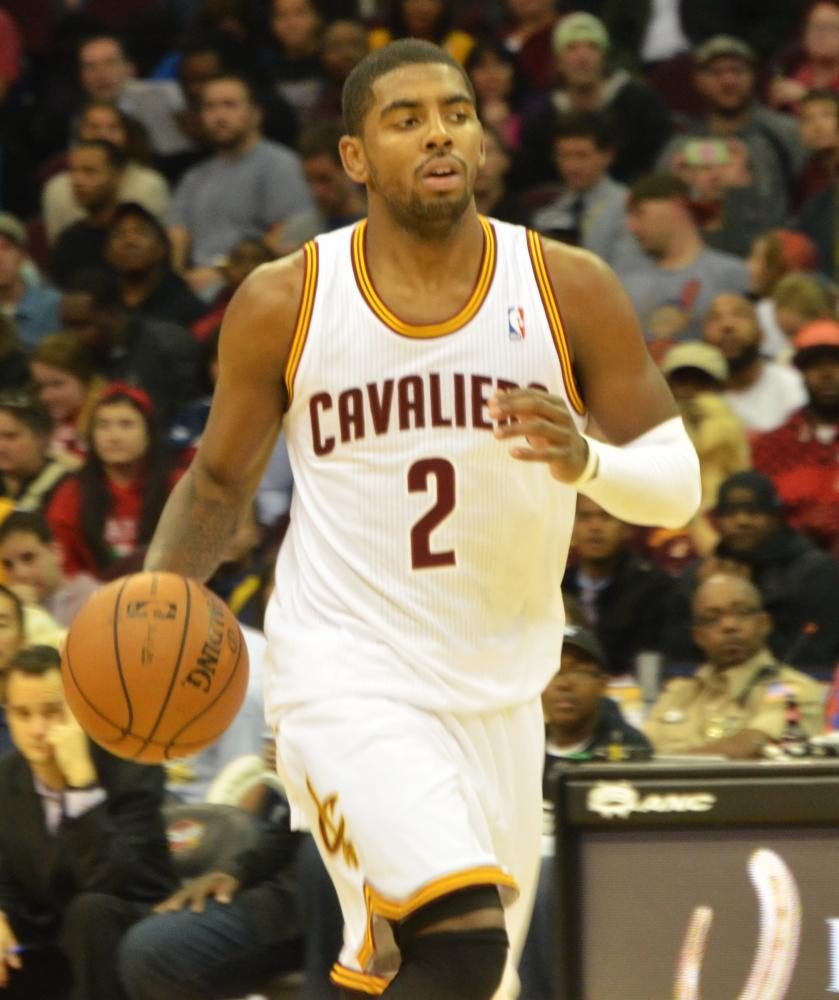 This may be one of the final published pictures of Kyrie Irving in a Cavaliers jersey, as the point guard was traded to the Boston Celtics over the summer.

After Kyrie Irving demanded a trade earlier in the offseason, it seems the Cleveland Cavaliers have granted their star point guard his wish and sent him off to the conference rival Boston Celtics. The Cavaliers, in exchange, receive All-Star point guard Isaiah Thomas, Jae Crowder, Ante Zizic,  the 2018 first round pick from the Brooklyn Nets and the 2020 second round pick from the Miami Heat, both controlled by the Celtics.

In what was one of the most impactful trades in recent memory, the two teams essentially swapped All-Star point guards with the Cavaliers receiving extra compensation. For Irving, this ends what was likely a tumultuous few months for him after the Cavaliers’ loss in the NBA Finals to the Golden State Warriors in five games.

Irving, since being drafted by the organization with the first overall pick in 2011, was loved by Cavs fans for his ability to create shots at any point in the game and from anywhere on the court. He was able to help Cleveland forget about Lebron James’s infamous departure and help mend a city that had been broken.

Fans’ reaction to the trade were varied. Some fans, as has become an unfortunate custom of big trades or free agent moves, burned their respective players’ jerseys. Other fans showed gratitude and appreciation for what Irving meant to the franchise and to the city, even after James returned home.

As we now know, Thomas has raised concerns with his physical. The point guard injured his hip during the playoffs last season and elected not to have surgery. After Thomas was evaluated by doctors with the Cavaliers, the team asked for more trade assets for Irving. The trade had a chance of imploding until the Celtics threw in the 2020 second round pick after days of negotiations.

It is important to understand the career move that Irving has decided to take with the franchise. By wanting to leave, Irving is leaving a legend and one of the all time greats in James. Few players can leave a player of that caliber and still find success in their career. The Cavaliers have had an unprecedented level of success since James returned, going to three straight NBA Finals, winning once.

Another interesting component of Irving’s decision is the caliber of player that he wants to play alongside with. It was reported that Irving was tired of playing in the shadow of James and wanted to be the number one option of any team that he played for. However, there are few scenarios that would work out for Irving, while still remaining on a championship caliber team.

One team that showed interest in Irving was the Phoenix Suns. While it is true that with point guard Devin Booker, Irving would have a great number two option on a solid young team, the Suns still finished dead last in the hyper competitive Western Conference last season, managing only 24 wins.

On any team that Irving would be traded to that has legitimate championship expectations, there is definitely a star player and likely a second one as well, effectively nestling him somewhere between the second or third option. In Boston, for example, Irving would be playing alongside Gordon Hayward, a superstar in this league. The very best outcome for Irving would be as a co-number one option.

Irving seems to be fed up with all the drama and speculation that his franchise has gone through this past offseason. In the end, one can appreciate his desire to simply play basketball without any of the other drama.

That being said, Irving is seriously threatening his ability to win another ring or two by leaving one of the greatest players of all time and going to a team that he desires to be the number one option for. While any fan would wish him the best of luck, there are certainly many questions raised in his decision.