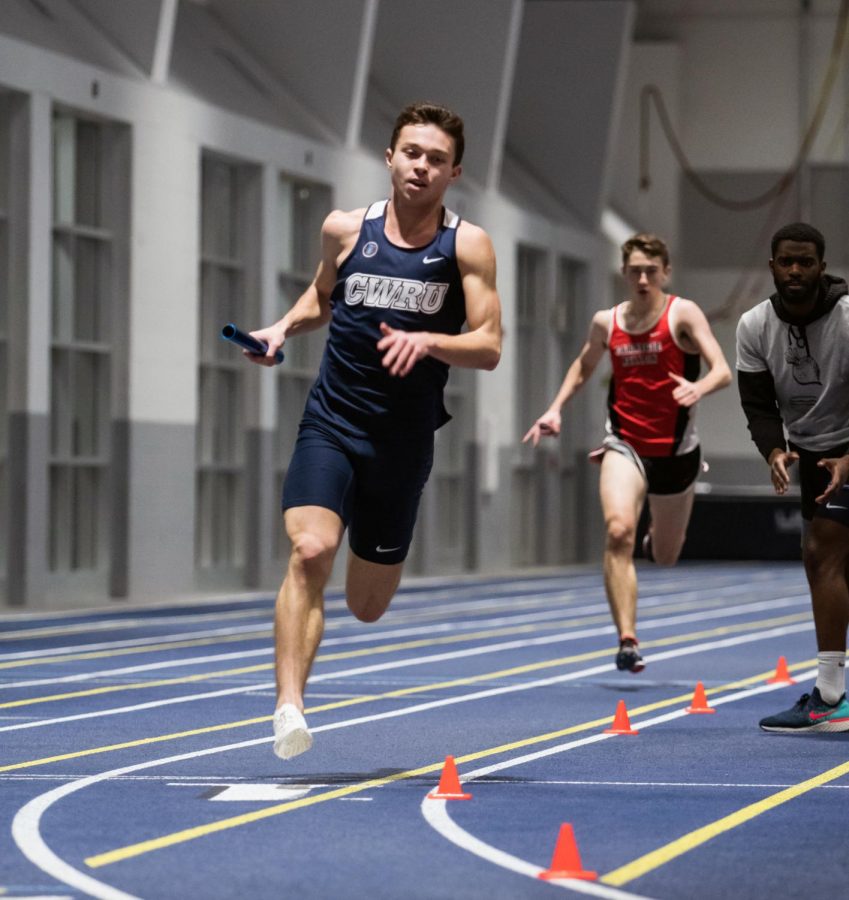 Third-year Michael Hradesky competes in the men’s 4x400-meter relay, which placed fifth at the UAA Championships. Hradesky will compete in the 800-meter run this weekend at the ONU Polar Bear Last Chance Meet.

The Spartan track and field team competed at the University Athletic Association (UAA) Championship over the weekend. The event was hosted by Brandeis University. The Spartan women finished fifth, scoring 66 points, and the Spartan men tied for fifth, scoring 50 points.

The Spartan women weight throwers stood out on the first day. Graduate student Cassandra Laios claimed the UAA Championship in the weight throw with a mark of 17.92 meters on her throw in the finals. Second-year teammate Taylor Jackson and fourth-year Spartan Marina Yu also placed in the event. Jackson finished third with a mark of 14.46 meters, and Yu claimed fourth with her mark of 13.89 meters.

In the 5,000-meter run, third-year runner Madeline Lindemann finished second, which earned her All-UAA honors. She crossed the finish line with a time of 17:43.88. Additional highlights for the Spartan women on the first day of the competition include third-year Abbey Waltz, who placed fourth in the pole vault with a mark of 3.63 meters, setting a new school record. The previous record was set in 2016 by Christen Saccucci with a mark of 3.50 meters.

Additional top five finishes for the Spartan men include third-year Spartan Domonic Oddo, who finished fourth in the long jump with his jump of 6.64 meters, and third-year thrower Brian Holden claimed fourth in the weight throw with a mark of 14.58 meters.

Lindemann also placed again, this time in the 3,000-meter run where she finished in 10:08.54 to claim fifth place. The 4×400-meter relay also placed fifth. The team was made up of second-year student Julie Hines, third-year students Vanessa Pasadyn and Maria King and fourth-year teammate Olivia Newman. The team finished the event with a time of 4:10.00.

The track and field teams will return to action at the Ohio Northern University Polar Bear Last Chance Meet on March 1 and March 2. This event is the final chance for qualification for the 2019 NCAA Division III Indoor Track and Field Championships, which will take place on Friday, March 8 and Saturday, March 9.