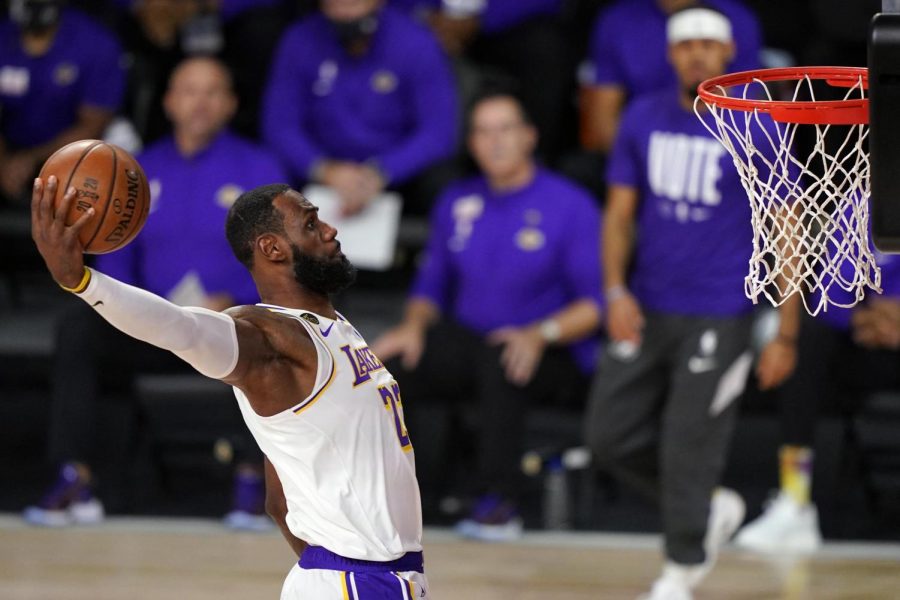 LeBron James leads The Lakers to victory in the 2020 championship, winning his fourth NBA Finals MVP award along the way, becoming the first player to win the award with three different teams.

Throughout the extraordinary 2020 NBA playoffs, the Los Angeles Lakers and the Miami Heat battled for the championship, with both teams at the top of their game.

In the first game, both teams fought hard and the game was tight until the Lakers pulled away in the second quarter and never looked back. Anthony Davis and LeBron James had strong performances in the first game, with LeBron scoring 25 points and coming up one assist short of a triple-double, and Davis with 34 points to go along with nine rebounds.

The Heat saw solid performances from Jimmy Butler, Kendrick Nunn and Tyler Herro, who combined for 55 points total. Unfortunately, the Heat lost starting guard Goran Dragic and all-star center Bam Adebayo to injuries during the game, which made it hard to catch up with the Lakers.

In game two, the short-handed Heat looked to even up the series, but the Lakers kept the game close before pulling away at the end. LeBron and Davis had monster performances, scoring 33 and 32 points, respectively. LeBron was one rebound and one assist shy of a triple-double and continued his impressive play. Davis led the team with 14 rebounds. Rajon Rondo provided a major spark off the bench with a 16 point, 10 assist double-double.

The Heat saw star Butler and Kelly Olynyk playing well, scoring 25 and 24 points, respectively. This along with Herro’s 17 points weren’t enough as the Heat fell by ten points with a final score of 124-114.

Game three was a must-win game for the Heat to keep their title chances alive, and they played like they were putting it all on the line. Miami was still missing two starters in Dragic and Adebayo, but still played a strong game and held their own against the Lakers. The Heat managed to hold Davis to only 15 points and five rebounds, and this made all the difference. LeBron had a strong performance with 25 points, eight assists and 10 rebounds, but this wasn’t enough to weather the strong Heat performance. Butler put out another impressive performance, scoring 40 points along with having 13 assists and 11 rebounds. Herro and Olynyk had 17 points each, helping the Heat stay alive in the series with a 115-104 win.

Coming into game four, the Lakers looked to take a commanding 3-1 lead in the series and did just that with solid performances from LeBron, who again almost had a triple-double, with 28 points, 12 rebounds and eight assists. Anthony Davis also helped out the team with nine rebounds to go along with 22 points. Kentavious Caldwell-Pope was a pleasant surprise with 15 crucial points to help the Lakers secure the win. The Heat were without guard Dragic again as he was out due to injury. Adebayo returned to the starting lineup but was not 100 percent as he was coming off an injury. Butler played well with 22 points, 10 rebounds and nine assists, but the combined 60 points between him, Herro and Duncan Robinson were not enough to hold off the Lakers.

The Lakers looked to close things out in game five, but the Heat came out stronger and didn’t let them. The Lakers got most of their scoring from LeBron, who scored 40 points, and Davis, who scored 28. Caldwell-Pope was the only other Laker who scored more than 10 points. Every starter for the Heat had scored double digit points, with Butler dropping 35 points and sharp-shooter Robinson scoring 26 points. Despite another absence by Dragic, the Heat were able to hold off the Lakers with a 111-108 win to make the series 3-2.

Looking to close out the series again to avoid a tough game seven, the Lakers came out and thoroughly dominated the Heat up through the third quarter. Entering the second half, the Lakers held a strong 64-36 lead and never looked back. Four starters for the Lakers scored double digits with LeBron scoring 28 points to go along with 10 assists and 14 rebounds, securing a triple-double. Coming off the bench Rondo had a strong game with 19 points off an efficient 8-11 shooting night. The Lakers defense was suffocating all night as the team recorded five steals and forced 13 turnovers. Butler was held to only 12 points, with center Adebayo being the only Heat player to score more than 20 points.

It all culminated in a Lakers 106-93 win, securing both the series and the title.Courtesy of Bleacher Report

LeBron won his fourth NBA Finals MVP award, becoming the first player to win the award with three different teams. The win earned the Lakers their 17th championship total and their first since 2010, when Kobe Bryant led the team against the Boston Celtics. They’re now tied with the Celtics for the most championships.

As another new offseason begins, teams like the Heat will look to bolster their rosters for another attempt at a title, while the Lakers will look to fortify for a repeat effort in the 2020-2021 season.