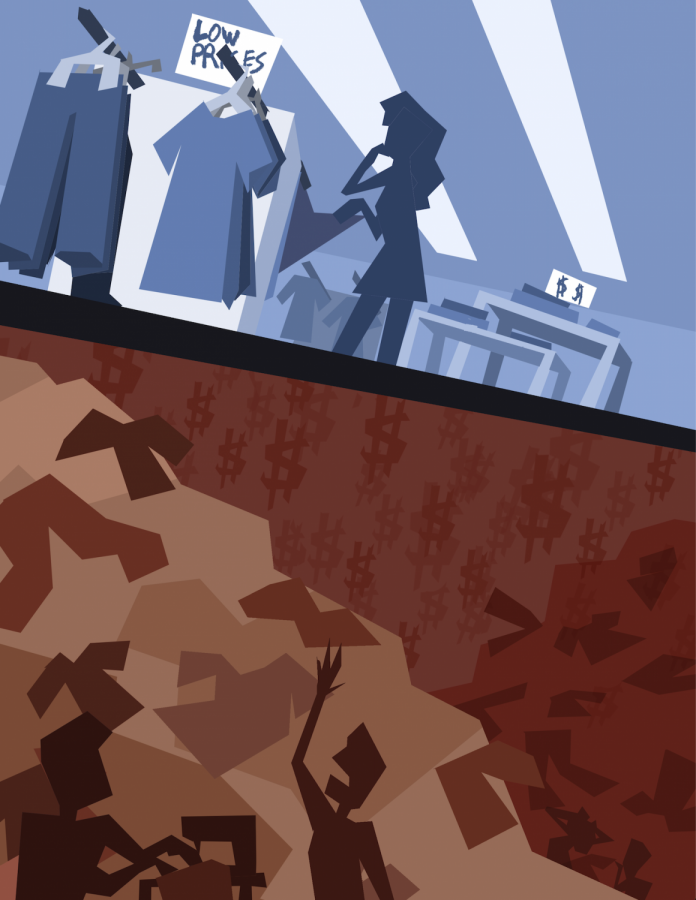 The surge of thrift shopping as a new trend has brought up another pressing, related topic: fast fashion. Fast fashion—cheap clothing produced en masse as an alternative to expensive, popular brands—is an awful consequence of capitalism. It’s able to thrive and exist because of infinite competition, exploitation of cheap labor and the endless pursuit of profit maximization. While it’s great that the problems with fast fashion are being discussed, it also brings up the question: is it possible to consume and buy products ethically in a capitalist system?

Fast fashion is popular because it’s cheap and trendy. Stores like Forever 21, Shein and Boohoo appeal to the public because they keep up with style trends while remaining relatively inexpensive. But the failings of these companies lie in their unethical production of clothes and the amount of waste they produce.

Bangladeshi workers are the primary victims of fast fashion; they work under horrible conditions and are not paid enough—or at all—even though it’s typically the main source of income for their families. Furthermore, the amount of waste produced from the mass production of these clothes and those which aren’t sold, is astronomical. And to top it off, fast fashion is an endless cycle that’s hard to escape. Cheap clothes are made for a cheap price, and when a new trend arises (which is all the time, since fashion also follows seasons and trend shifts are advertised heavily), the consumer has to continually purchase new clothes to sustain their wardrobe.

While I always advocate for trying to reduce your consumption of items that come from fast fashion, I completely understand that it’s not possible for many people to do so. Fast fashion is successful for several reasons—one of them being that it’s affordable. No one should be shamed for buying fast fashion when it’s all they are able to afford. As long as you aren’t constantly buying from brands like Shein as a hobby, I understand the appeal and necessity of buying from those types of stores. It’s hypocritical and classist to judge someone for consuming fast fashion, especially when there aren’t that many truly ethical, yet affordable brands.

It’s hard to find brands that are both ethical and affordable, and if one does exist, I haven’t found it yet. Everlane, which was not reasonably priced but advertised as ethical, was recently exposed for fraudulence. Employees have criticized the company for racist behavior, including anti-Black behavior and an awful workplace culture. The company prides itself on “Radical Transparency,” but it is clear even if clothes are ethically made, it doesn’t mean the company is ethical.

More popular brands such as Madewell and H&M have started environmentally friendly clothing lines. However, H&M was accused of not actually implementing it’s recycling clothes initiative. Either way, it’s difficult to rely on brands for ethical sources of clothing, whether it’s because of the unethical production or the lack of transparency in company culture.

Thrift shopping is currently the most ethical way to buy clothing, but there is the hypocrisy of thrift shopping being “cool” or “trendy” nowadays. Thrift shopping used to be looked down on, and still is by a lot of people; only “poor” people shopped at thrift shops and were ridiculed for it. But now, it’s quirky to thrift shop, especially for rich white girls who are taking affordable clothing from people who need it the most.

Plus-sized clothing is also hard to come by on fast fashion sites or regular stores, so thrift stores are a great resource for that community, too. But when people start buying “oversized” basics (jeans, t-shirts, business professional clothes, etc.), it’s depleting a whole community of their resources.

The increased use of thrift stores have forced prices to steadily increase, putting lower-income communities at a greater disadvantage for affording clothes. The gentrification of thrift stores is happening without many people realizing it.

I generally find that the best way to go thrifting is to do so only occasionally, buying things that are likely not to be necessities and not reselling them at a higher price.

Furthermore, many thrift stores face the same controversies as fast fashion in realizing an ethical company culture and limited amounts of waste. For example, while Goodwill is known for hiring disabled employees, they have also been accused of treating these employees horribly. Plus, thrift stores like Goodwill only sell 10% of their clothes, and then send the remaining 90% to countries in the global south, creating more waste. So, even thrifting isn’t as ethical as it is perceived.

In our era, it is impossible to shop ethically under capitalism. The majority of us can’t afford clothes from ethical brands, leaving us to buy from fast-fashion or other stores that fail to prioritize ethical conditions. Thrifting is a good alternative, but at the same time, it’s hard to thrift ethically so the community that really needs thrift stores can adequately access their resources.

We can, however, try to be better about our intake of clothes. We shouldn’t always buy that new shirt that we will only wear two times or shop just to fit in with trends that will be gone in a year.

If we all reduce our clothing consumption and give clothes to relatives and friends, we can limit the amount we have to buy from unethical brands that contribute to poor working conditions, inhumane wages and pollution.