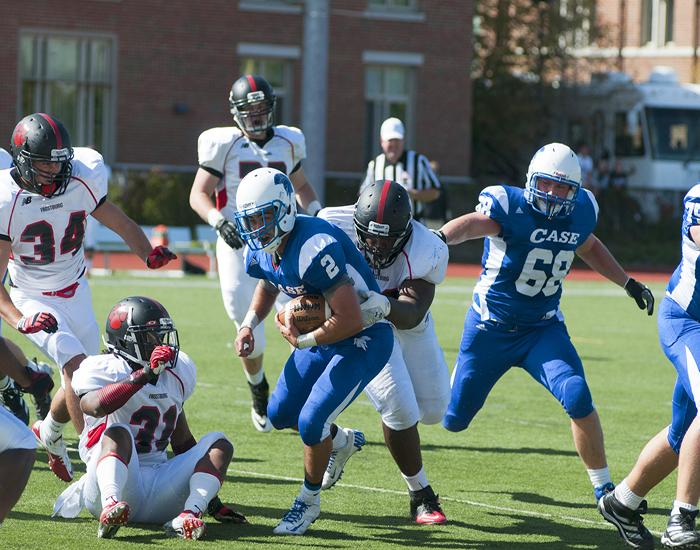 With 43 seconds remaining in fourth quarter, Frostburg State University sophomore quarterback Ken Emmons found junior running back Chucky Iweh to tie the score at 16 apiece. The point after by junior kicker Jonathan Adams sealed the Case Western Reserve University football team’s demise. Case sophomore running back Manny Sicre recorded 91 yards on the ground and caught for another 83 yards to go with his two touchdowns, but the last-minute score led Frostburg State to a 17-16 upset of the Spartans in their 2012 home opener at Case Field, on Saturday Sept. 15.

The Spartans drop their second-straight home opener, but still maintain a 50-7 overall record since the beginning of the 2007 season. Last season the Spartans lost only one game, the home opener against Rochester. The Bobcats improve to 2-1 with the victory.

Case led 16-10 until the final minute, but Frostburg, which also defeated Geneva in its season opener on a last minute touchdown, outgained Case 362 to 222 yards in total offense and held a significant advantage in time of possession (36:05 to 23:55).

Frostburg worked its opening drive for a touchdown. After the first possession of the game resulted in a Spartan punt, The Bobcats took possession and marched 86 yards down the field on 14 plays that covered 6:21 on the clock, then scored when Iweh leaped over the goal line pile for a one-yard touchdown run. Adams hit the extra point at the 6:21 mark as the Bobcats converted three third downs on the drive and led 7-0. Emmons completed four passes for 55 yards on the opening offensive.

The Spartans wasted no time matching the visitors as they came right back on the following possession when senior quarterback Erik Olson connected with Sicre for a 15-yard touchdown on a screen pass. Freshman kicker Won Kun Park hit the extra point with 2:20 left in the first quarter, capping a 10-play, 65-yard drive. Sicre rushed in 13 yards in three consecutive rushing plays. The first quarter ended with both sides tied, 7-7.

The game then went scoreless for the next period of play with the Spartans foiling an opportunity for Frostburg just inside five minutes left in the second quarter. With the Bobcats at the Case 10-yard line, Adams’ 27 yard field goal attempt was blocked by senior defensive end Adam Watson to end a 5:09 drive. The Spartans forced another turnover when senior outside linebacker Mike Fioramonti picked off a pass in the red zone. However, Fioramonti only returned for seven yards until he was stripped by Frostburg’s Anthony Young to return the possession back to the Bobcats.

Several drives later, Frostburg broke through with an eight-play, 62-yard drive that culminated into a 17-yard field goal by Adams with 12 seconds left before halftime. The teams headed into the locker room with Bobcats up 10-7.

Early in the third quarter, the Spartans gained the momentum as Watson recorded another block on a Bobcat punt, giving Case possession at the visitor 29. The offense then put together an eight-play drive and found the end zone for a second time when Sicre broke the plane from two yards out. Kun Park missed the extra point, leaving the Spartans with a 13-10 lead with 9:02 left in the third period.

The drive was a one-man show for Sicre. The running back rushed for 20 yards and caught a 12-yard reception from quarterback Olson to help put the Spartans back in front of the lead.

Both defenses tightened again and it wasn’t until Kun Park’s 24-yard field goal shot with 4:58 remaining in the game did either team score. The freshman’s third field goal of 2012 made the score 16-10 with just minutes remaining.

However, Frostburg wasn’t ready to surrender as they mounted an 81-yard drive on 10 plays to score the deciding touchdown as Emmons scrambled out of the pocket and found Iweh for a six-yard scoring pass. Emmons keyed the drive with runs of 16 and 32 yards.

With the score at 17-16, the Spartans rallied for one final drive, but resulted in an interception as the Bobcat defense sealed the one-point upset.

Offensively, Sicre’s 91 rushing yards came on 27 carries, while he had 83 receiving yards on three receptions with a long of 54 yards. Olson completed 10-of-21 for 136 yards and recorded one touchdown with an interception.

Emmons led Frostburg with game-highs of 221 yards passing and 93 yards rushing. Running back Michael Fourth had 58 yards on the ground and caught six balls for 60 yards. On defense, end Aaron Gruber totaled 13 tackles and a sack, while linebacker Roman Pinkett recorded the clinching interception.

The Spartans hit the road for the third time in four weeks with for their third night game of the season at Ohio Wesleyan University tomorrow Saturday, Sept. 22 at 7 p.m. at Selby Stadium in Delaware.