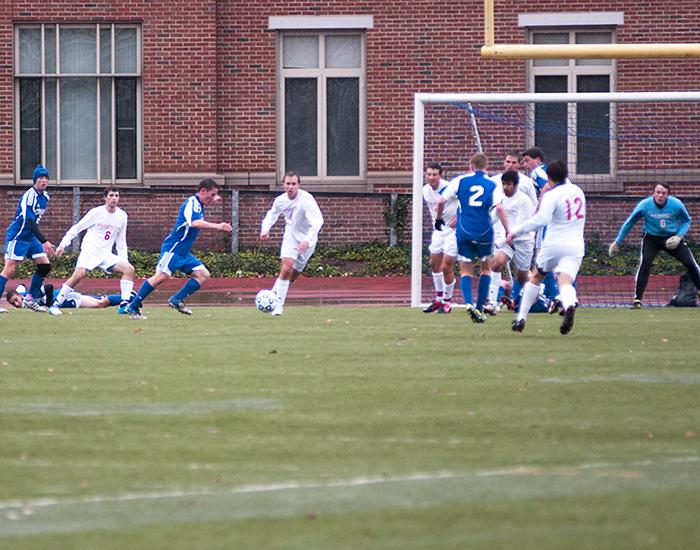 A pair of heartbreaking losses at home for the Case Western Reserve University men’s soccer team has echoed the coming end of a disappointing season. A year after winning the University Athletic Association title, the team has found itself in a rebuilding phase as it sits at the bottom of the conference after a 1-0 loss to the University of Chicago and 3-2 double overtime defeat to Washington University.

The two losses extend the team’s losing streak to nine games and the winless streak to 11.

The Spartans (3-13-1, 0-6-0) had plenty of chances to grab a point at home but were unable to close out either match. On Friday, Oct. 26, Case took on visiting Chicago in a strong defensive effort. The cold, rainy night led to little offensive action as Case managed just one shot of their eight on goal. The Maroons put five of their 12 shots on goal. In addition to being outshot, the Spartans conceded four corner kicks and earned none.

Case played the Maroons (8-4-4, 2-3-1) to a tee in the first 75 minutes of the match but let up a goal in the 78th minute when Chicago’s Terrell White found himself in a possession of a loose ball in front of the net before slotting it past senior goalkeeper Ryan Koepka.

With the Maroons up 1-0, the Spartans mustered their finest effort of the evening when sophomore forward Patrick O’Day made a run, but saw his shot go just wide in the 81st minute.

Sunday’s match against Washington ended with more heartbreak as the Bears (10-4-1, 4-2-0) were able to sneak out of Cleveland with a victory in extra time.

The Spartans were able to get a shot of energy early in the match as senior Ross Twanmoh gave the team the lead in the 15th minute with a goal past Washington goalkeeper Jonathon Jebson. The goal gave the Spartans their first lead in 830 minutes of play since a 1-1 draw against Franklin College.

The Bears were able to match the Spartans’ play with an equalizer in the 42nd minute when Jeremy Kirkwood beat Koepka to put the visitors on the board. Zachary Query, who assisted on Kirkwood’s goal, added his own with just five seconds remaining in the first half off a rebound.

Down 2-1 for much of the second half, the Spartans once again found life when senior midfielder Aaron Mayer notched his second goal of the season off a pair off passes from senior midfielder Eric Erb and freshman forward Chris Cvecko. Mayer’s goal in the 83rd minute stood for the rest of regulation as the two teams headed to extra time.

The first 10 minutes of extra time saw little action and no scoring before the second period began. Just 1:26 into the second overtime period, Query broke free and scored his second goal of the match, giving the Bears the 3-2 victory.

The visitors had a 14-11 advantage in shots while both teams were very accurate with the Bears putting 11 shots on target compared to Case’s eight. Each team had four corner kicks.

Koepka had a fine performance as he tallied a career-best eight saves in goal. Jebson had six stops for Washington.

The Spartans will finish their season away from home as they travel north to the University of Rochester. The teams will match up on Saturday, Nov. 3 at 7:30 p.m. The Yellowjackets are 9-3-3 overall and are 2-1-3 in the UAA sitting in third with nine points, well within striking distance of the top three spots.