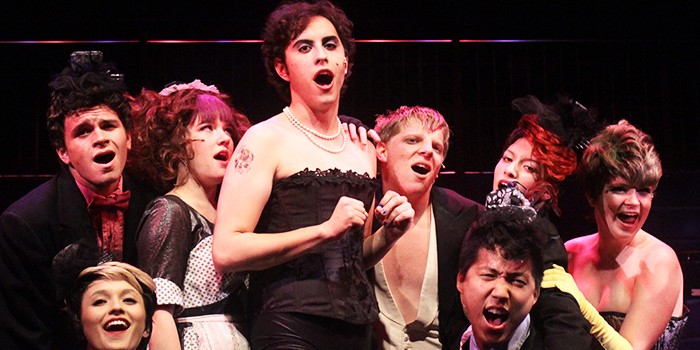 This is not Strosaker! Rather than actors simply acting out the scenes from the iconic cult film on stage, Eldred is pleased to bring you an authentic theater production of the Rocky Horror Show in all its campy glory. Moreover, this is a very special production for Eldred. The last time Eldred put on a musical was Godspell back in 1976. It is quite literally a once in a lifetime opportunity to see a musical on Eldred’s stage. Indeed, after the 36 year hiatus, Eldred aims to please with a production full of the glitz, glamour, and gore of a B-movie rock musical.

Eldred’s show is based on the original Rocky Horror Showwritten by Richard O’Brien, who plays Riff Raff in the film. It is important to note that, as the original theatrical production, it differs slightly from the film, The Rocky Horror Picture Show. Certainly, the main plot, story, and characters remain the same, but for those who have seen the film, you will certainly get some surprises. Thematically, Rocky Horroraddresses the issues of identity and finding oneself, particularly associated with gender, something with which O’Brien struggled. This is most apparent in the character of Dr. Frank N. Furter, played by Thayer Juergens. He describes Frank as “mercurial,” shifting throughout the play from “a super sexual transvestite to a mad Frankenstein doctor to a proud mother/father and in between.” Other characters also undergo transformations, such as Janet Weiss, played by Kelly McCready. She goes from “a demure girl who sings about weddings to a corset- and high-heel-wearing liberated woman.” Brad Majors, played by Amnon Carmi, must contend with his own repressed feelings aroused by Frank. On top of the characters’ experiences, there is also O’Brien’s perspective with which to contend. Director Jerrold Scott said, “It’s great fun to explore the Englishman’s view of 1950s America.” O’Brien produces a truly zany mishmash of American culture from the modest 1950s up and through the sexually liberated 60s and 70s with an added dose of American B-movie horror kitsch.

This cultural miasma can be seen, beautifully rendered, in the impressive production values of this show. This is huge. As Kelly McCready says “Everyone knows that with this show you either go big or go home.” That is no lie. The set design takes great pains to mix the antiseptic Pleasantville-esque innocence of the 1950s with the gothic camp of a B-movie horror flick, as well as the rock aesthetics of the 1970s. The costume design, too, including stripper heels and kinky corsets, brings the classic raunchy over-the-top nature of Rocky Horrorto the stage. Most impressive however, is the sound design, which features live music played on a full four-piece rock set. Likewise, the cast has spent considerable effort perfecting their co-ordination and harmony. Kelly quotes the musical director as saying “I’ve never seen a show go from zero to bitchin’ so quickly.” This looks to be an exciting and unique experience for anyone going to the show.

Speaking of unique experiences, those who are familiar with Rocky Horrorshould already know of the cult following it entails. For those who don’t, be prepared for a thrilling experience, both on and off the stage. Rocky Horrorhas a rich tradition of audience participation known as call-outs in which audience members shout out various words and profanities, like “APE S—” and “A——” during the performance. There are even scripts online that provide details for the appropriate timing. For Eldred’s production, there will no doubt be call-outs, which should make each run a totally different experience, giving audience members a good reason to see it more than once. However, audience members should be aware that throwing things during the production is strictly forbidden.