Laverne Cox: What makes up identity? 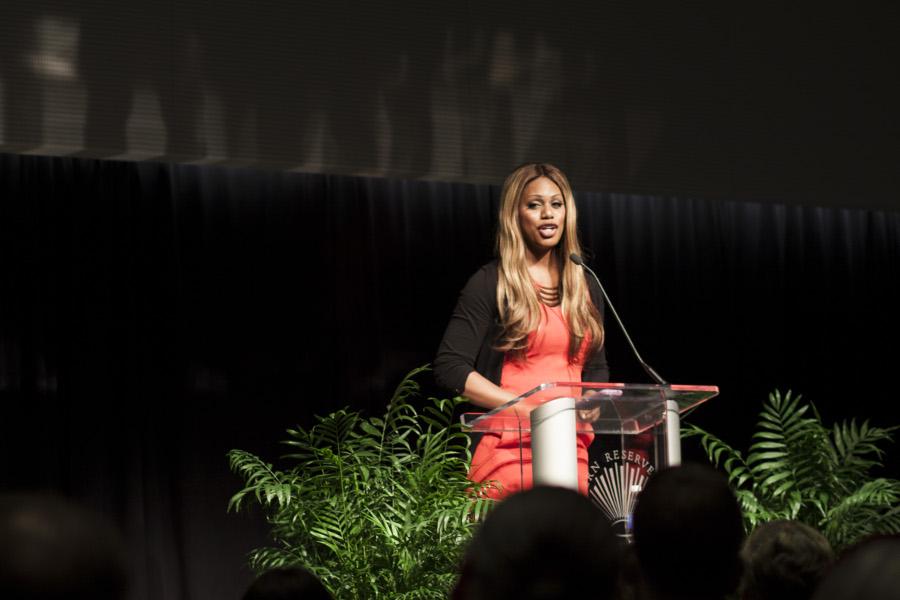 With Case Western Reserve University becoming more LGBT-accepting by leaps and bounds but struggling over issues of race, the message of Laverne Cox’s recent talk was perfectly matched to its audience.

On Nov. 6, Cox walked onto the Tinkham Veale University Center ballroom stage wearing a blood orange dress, to speak about feminism, inequality and intersectionality. The event, titled “Ain’t I a Woman?” was attended by a rapt audience of around 600 students, faculty, administrators and community members. Demand for tickets was so high that a live-stream of the talk was shown in Ford Auditorium.

Cox then began her talk by thanking Snyder and the others for their introductions and noting that it is rare that she is introduced by the president of a university at which she is speaking.

Continuing into her talk, Cox said, “I stand here this evening a proud African-American transgender woman from a working class background, raised by a single mother. I stand before you tonight an artist and an actress, a sister and a daughter, and I believe it’s important to name the various intersecting components of my multiple identities because I am not just one thing—and neither are you.”

That intersectionality continued to be an important theme through the talk. Cox spoke about being bullied for her gender identity in grade school and then her race in high school, and recounted a story where two men on the sidewalk had argued over whether Cox was “a b-word” or “an n-word.”

As she suffered through this cruel treatment at the hands of her peers and even random strangers, Cox did not always have pride and acceptance of the many facets of her identity, as she does now. She recalled painful moments in her past—being taken to a therapist to prevent her ending up “in a dress in New Orleans” and attempting suicide out of fear that her late grandmother was judging her from Heaven.

In with the more serious moments of her talk, Cox also included many of the triumphs that helped her reach her current success. From a third grader feeling regal while waving her fan like Scarlet O’Hara to a “club kid” in the 1990’s getting into New York’s clubs for free because of her unique style, Cox’s lighter moments have helped her hold on to her own identity.

Going forward, Cox advised the crowd that, “We have to create spaces of gender self-determination for all of our youth and all of our society.”

The talk also seemed especially suited to its collegiate setting when Cox brought in perspectives from Cornel West, Bell Hooks and Janet Mock, among other scholars and writers.

Roccoforte, who helped organize Cox’s talk, from its initial suggestion to standing on stage to welcome Cox to Case Western Reserve University, said of the sometimes academic tone of the talk, “I thought she was going to tell much more of a narrative, which she did, but her weaving in these theories and theorists was a lovely surprise.”

Before the talk, Cox took the time to meet with students representing a range of on-campus organizations including the #webelonghere movement, Spectrum, The Feminist Collective, African American Society and Voices: A Women of Color Collaborative. Afterward she spent 15 minutes answering audience questions. Those questions ranged from a high schooler asking how to make her school’s gay-straight alliance more trans-inclusive to a student curious as to Cox’s views on Beyonce as a feminist.

Cox advised students, in the answer to one of those questions, “At the end of the day, even within diverse marginalized communities—like the trans community, which is really diverse and definitely not monolithic—it’s really important to celebrate our differences, too.”

“I hope it started some good conversations,” said Roccoforte following this talk and the overwhelmingly positive feedback it has received, “that will lead to action and creating a more inclusive space in general for all students on CWRU’s campus.”