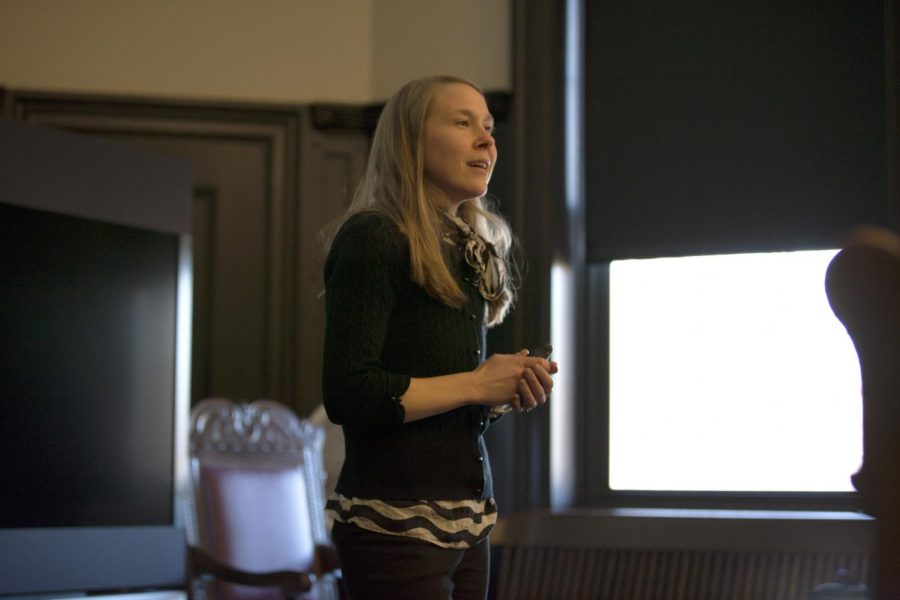 Dr. Sarah Thiam spoke on child trafficking in West African Qur’anic schools as part of the Department of Anthropology's Anthropology Lecture Series. Thiam's talk was the second installment of the series, which will continue throughout the academic year.

“When you see kids begging in the street with no shoes on and just a T-shirt, sometimes … you wonder, ‘What can I do?’” said Dr. Sara Thiam, a visiting assistant professor of anthropology.

In her lecture on March 6, Thiam discussed the misguided labeling of child trafficking and the ways in which child trafficking is covered by different international organizations. This talk was the second lecture in the Anthropology Lecture Series, which encourages Case Western Reserve University students to interpret and apply the study of human societies and cultures to real world problems.

“A big part of being a human is wondering why certain people are in [a given] situation and [why] I am not,” Thiam said. “You really want to do something, and most people give money. I felt helpless trying to give money in this situation, because it was said that these kids were being abused.”

Because of this, Thiam decided to take a closer look through her research.

Thiam’s research emphasis is on the promotion of rights for migratory Qur’anic school students in Senegal and Mali. In the lecture, Thiam elaborated on the smuggling of children disguised as Qur’anic students across the borders of different West African countries, when in reality, they were being used as beggars to profit their smugglers.

Thiam will be publishing an article in August concerning this issue.

Dr. Lihong Shi, an assistant professor in the Department of Anthropology and one of the series’ founders, wanted “anthropologists to talk about their research on different topics in different parts of the world to [explain] how research is represented,” and “to engage with the audience.”

Another founder of the series, assistant professor of anthropology Dr. Vanessa Hildebrand, said, “We noticed there [were] a lot of wonderful discussions in the two lectures we had previously, and we thought it would be great to have more lectures so we can have the department and the larger scholarly community together.“

“That is what being an academic community is about,” she added.

Thiam’s lecture was well received by its audience, and ultimately provoked thoughts the Anthropology Lecture Series intends to bring light to.

“[The lecture encourages] the discussion for human rights and human trafficking, and shows you the many ways you can think about it with respect to the NGOs, the government and the professors,” Julia Noks, a fifth-year doctoral student, said.

The next talk in the series will take place on March 26, and features Senior Scientist and Institute for Community Research founder Jean Schensul. The lecture is titled “Building Complex Collaborative Community Intervention Studies.”