Lehrer: On sexual assault on campus

A moment for celebration, a sign of progress, a reminder to keep going 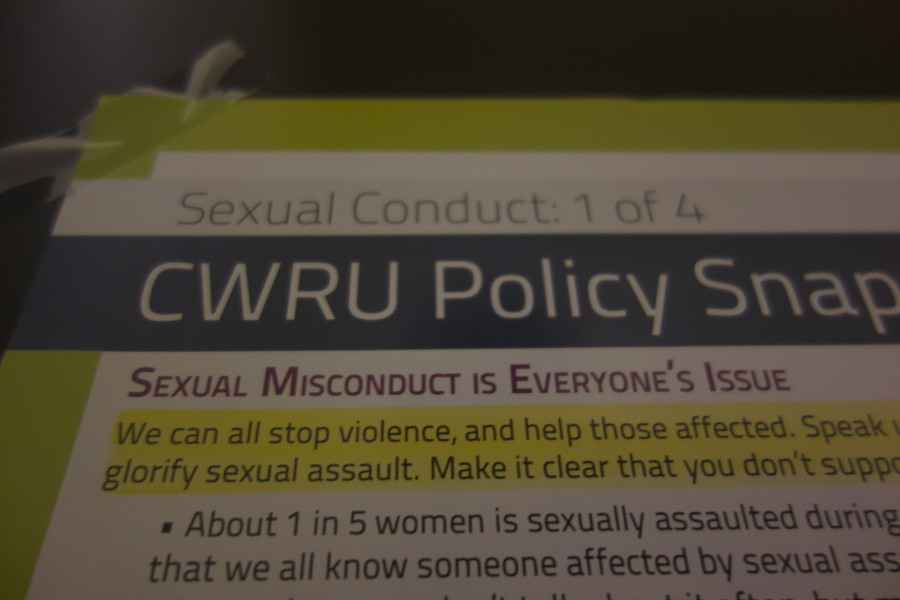 A poster in a bathroom on the first floor of Thwing. Sexual assualt is continuing a problem at CWRU, but many are working programs that hope to reduce the number of assualts and help victims.

There are a vast array of problems across American society associated with sexual misconduct and sexual assault; I’m hoping we all are ever so aware of this.

First, let’s do the number-crunching on the general American scope and effects of sexual assault and rape. Most recent statistics show that one in five women and one in 71 men are raped during their lifetime. Approximately in eight out of every 10 rapes, the victim knew their perpetrator. In other words, these crimes are not being committed randomly, but rather by people who are least acquaintances.

Maybe lesser known are the economic consequences of such acts that are coupled with the devastating and irreparable psychological and physical ones of sexual assault though. Each individual rape annually costs the United States approximately $151,423. On a nationwide scale, rape and sexual assault amounts to the highest toll of economic resources devoted to any other crime, at a staggering $127 billion. To put things in perspective, for Fiscal Year 2016, that is significantly higher than all federal spending on education at every level, which is $119.2 million (three percent).

Regarding college life, the most current data indicates that across the country, one in four women and one in 16 men are sexually assaulted while in college. Among all colleges surveyed by the Association of American Universities (AAU), the percentage of those experiencing any form of nonconsensual sexual contact—either via touching or penetration—was 11.7 percent overall, 23.1 percent for undergraduate female students and 5.4 percent for undergraduate male students.

Additionally, 12.8 percent of students surveyed had experienced intimate partner violence. Nevertheless, the rate of reporting such occurrences to university officials or law enforcement range from as low as five percent to as high as 28 percent, depending on the specific sexual act. One additional factoid: In general, it is estimated that every 21 hours, a rape occurs on a college campus in America.

As for Case Western Reserve University, there remain problems as well, of course. Most of the data can be extracted from the aforementioned 2015 AAU report as well as our individual institution’s report, which can be accessed by any member of the CWRU community.

So, here at CWRU, we had and still have work to do. Over the past few years, I have seen some great initiatives started and much-needed actions taken. Within Greek Life, headway is being made pertaining to prevention and intervention through many new programs. This includes, but is by no means limited to, the creation of the “Culture of Care” plan and the newly-formed Greeks Against Sexual Assault student organization, in addition to the pre-existing Students Meeting About Risk and Responsibility Training.

University-wide, there have also been substantial efforts toward prevention and intervention that I’ve seen over the past two years. We began by sending out a community letter including pertinent information, available resources and practical recommendations for the members of the CWRU student body.

Another measure we took was implementing into our New Student Checklist the Undergraduate Community Module. By doing so, the goal is to teach our undergraduate students the skill sets and knowledge they need and the resources available to them on the first day they arrive on campus.

Next, I’m sure everyone has noted the new bathroom posters. Well, last spring, Associate Vice President of Student Affairs Susan Nickel-Schindewolf sought the opinion of all CWRU community members on what to revise and update for the new posters. I showed up to a few of the meetings she held, and I am happy with the deeper level of transparency and updates on policies as well as resources provided on them.

And the most recent development has been the formation of an entirely new Office of Title IX, led by Associate Vice President and Title IX Coordinator Darnell Parker of Student Affairs, which is dedicated to being a “resource for students, faculty and staff on issues related to Title IX and sexual misconduct.” For reference, it is located on the third floor of the Thwing Center.

As an undergraduate delegate to the Faculty Senate Committee on Undergraduate Education, I have learned about many of the key steps being taken and the continual momentum on addressing the significant matters of sexual misconduct on our campus.

The most notable thing of all, in my opinion, is that CWRU has now been identified as a model for American colleges and universities. We were the 2015-2016 Gold Award Winner for the NASPA-Student Affairs Administrators in Higher Education Excellence Awards under the Violence Education and Prevention, Crisis Management and Campus Safety Category. To clarify, NASPA is one of the leading national organizations for college student affairs staff across the United States.

I have confidence in all these new programs and plans being instituted, and I hope you do too. Yet, while we should take a moment to celebrate on these improvements and advancements we’re making on many levels of the university, we needn’t stop here. If anything, we should seek to further develop the most innovative strategies to curb sexual assault here at CWRU and on college campuses across America.

In contrast to commonly-held perceptions, I feel that the administration is always here and readily available to help. They seek to empower, rather than preclude, us to affect meaningful change on our campus.

This change I speak of starts with and requires ample student involvement and engagement, obviously. We must be relentless and attentive to the current trends on our campus and how they are affecting ourselves, our friends and our classmates.

Will you take it upon yourself to do so?

Josh Lehrer is a fourth-year student. One of his favorite quotes and his life mottos by Epictetus appeared on one of the older bathroom posters: “We have two ears and one mouth so that we can listen twice as much as we speak.”

A shortened version of this column appeared in print on Friday, Feb. 24