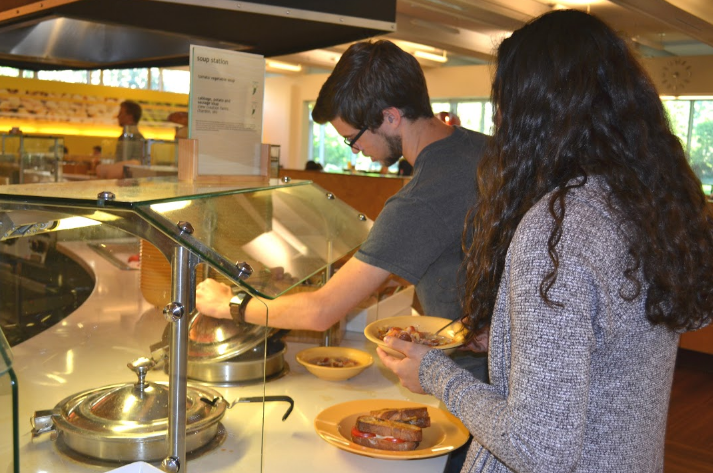 There has been student concern that Bon Appetit has served food in reduced portion.

In the morning you give your Case Western Reserve University ID card to the employee by the door of Leutner Cafe or Fribley Marche, grab an apple and have a bowl of oatmeal or some other food. Between classes, you go to Sears Library or the Thwing Center and get food from Grab It or Bag It! You may do different things every day, but Bon Appétit Management Company is always a part of your routine. Does it ever occur to you whether Bon Appétit has changed food portion or the options on their menus?

At the beginning of this semester, some students complained that the portions of salads, soups and pastas at some Tinkham Veale University Center eateries have been reduced. Students also reported that there are less food choices at Leutner and Grab-it.

“At 8Twenty6, the salad gets smaller and there are also less options that you can put on the salad,” commented Rye Carroll, a third-year student. “You used to be able to make your own pasta bowls and I don’t think you can do it anymore.”

However, according to the Resident District Manager of Bon Appétit, Jim O’Brien, the portions and options in any eatery around campus have never been changed. Size of containers for take-out sometimes do change. According to a staff member at Melt University, it is just because they use new types of containers when the other ones run out.

O’Brien also points out that the menus in Leutner and Fribley change all the time just to satisfy students’ needs. Chefs at the two dining halls are encouraged to renew their menus regularly, because Bon Appétit believes that students may want different varieties of food from time to time.

According to O’Brien, what did change is the size of a slice of pizza that is offered in Leutner. It is smaller now in order to give students more chances to try different varieties of pizza without wasting too much of it.

The portion of food in Leutner and Fribley is measured by calories. Although students can always ask for more or less food, originally every student gets one serving of food corresponding to its calories listed on the printouts next to the serving tables. The standard calories for one serving of food and the size of utensils have never been changed, according to a staff member at Leutner.

Another hot issue about food services around campus is meal swipes and Case Cash. Students usually prefer to have more portable meal swipes that can be used at places like Melt or The Den by Denny’s. With Case Cash, students can also purchase food at many Uptown restaurants like Chipotle Mexican Grill and Panera Bread. Currently, every student who is on the meal plan has three portable meal swipes per week. On the other hand, not all restaurants around the University Circle accept Case Cash. The Undergraduate Student Government is responsible for communicating with businesses around campus and advocating for a broader use of meal swipes and Case Cash.

“The dining services that include meal swipes and Case Cash are determined by the school, not us,” said O’Brien. “Meal swipes are more like a contract between students and the university.”