Lessons from bread making in quarantine 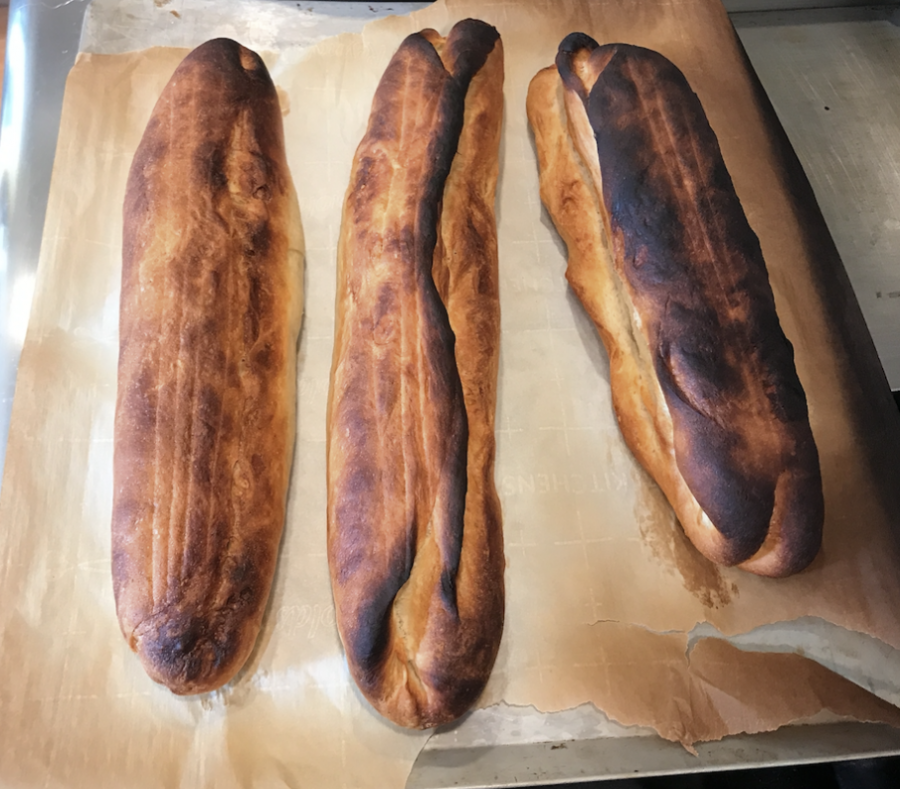 Burnt bread is an acceptable reason to cry and drink before 11 a.m.

Bread. It’s a staple food, available at a wide range of prices and qualities, in various forms, across a variety of cuisines. It’s also a relatively simple food: just flour, water, salt and yeast. And for the many people stuck inside, bread baking has seen a serious revival. With amateur sourdough starters and bagels filling social media feeds, it’s easy to feel as though everyone is jumping on the bandwagon—but as the quantity of home-baked bread increases, so do questions about its quality.

In a piece about homemade bread, it’s hard to separate the reporter from the story, so, a brief explanation—I’ve done a number of pieces on Cleveland restaurants, shadowed a few bakers and worked as a waiter for several restaurants that bake their own bread. I also consider myself to be a bit of an amateur chef. So, armed with my experience and self-confidence, I dove into the world of breadmaking headlong—and emerged covered in flour and self-doubt.

The investigation into homemade bread started with the baguette. There are a number of different ways to make a baguette, but they’re all fundamentally similar, and not particularly complicated.

The night before baking requires the preparation of a poolish, or starter dough, which uses a little bit of yeast and some water and flour to get the fermentation that prevents the bread from becoming dense and bricklike. The next day, the poolish is added to more flour, yeast and water. After that, it goes through a rising and shaping process and is then baked.

It turns out that there are more than a few takeaways from the first round of baguettes that any would-be baker should be aware of. The temperature of a kitchen is incredibly important to the fermentation process, and working in a cool kitchen requires a much longer rising time. Otherwise, the yeast won’t activate enough and you’ll get logs of dough with almost no air pockets where there should be bread. In a similar vein, oven temperatures aren’t always what they seem, and it is incredibly important to keep an eye on the oven, lest a 26-hour baking product comes out burnt even though it baked for eight minutes less than the recommended time.

At this point in the investigation, it was decided that perhaps baguettes were too ambitious and that the experiment should refocus on an even more basic product: the humble sandwich loaf. No starter, no shaping of the loaf, just make the dough, let it rise and throw it in a loaf pan. This also resulted in failure, for the same reason. The cold kitchen prevented the dough from rising the appropriate amount and that, combined with an impatient baker, resulted in a flour-based doorstop being audibly thumped out of the loaf pan.

After the sandwich loaf was repeated enough times that it came out resembling bread and even tasting delicious, in the form of a panini sandwich, the investigation turned towards the most time-intensive part of the project—made-from-scratch sourdough, complete with a homemade starter.

Sourdough gets its name and flavor because instead of using commercial yeast, its leavening agent comes from a mixture of flour and water that is continually fed until the natural yeast from the product can be used to make bread. This is what gives sourdough bread its unique flavor, and it requires about a week of daily effort to accomplish even a functioning starter.

Every day the starter must be fed with carefully weighed out flour and equally labor-intensive water, which must be at a specific temperature in order to inspire growth in the yeast without killing it. The kitchen must also be warm enough to facilitate growth, and in the cold Seattle confines of this experiment, the starter only grew on days when it was sunny in the kitchen, which can be difficult in a city that averages 308 cloudy days per year.

Still, after a week of contributing pounds of precious flour, the sourdough starter was ready for the final test. Every instruction was followed—the flour and water mixed so as to encourage gluten development, the starter fed and then introduced to the dough, and the pinching method used to carefully fold the mixture over itself to produce the proper loaf.

There was much anticipation when the bread went into the oven. In only a short time, the culmination of weeks of work would be ready—a delicious bread made literally from scratch.

It was terrible. The bread was so rock-like that by the time it cooled down, it couldn’t be bitten into, and the middle was so dense that it was barely recognizable as bread at all.

When made at home, bread can be fun or frustrating, is always time-consuming and sometimes headache-inducing. So go ahead and give bread baking a try—you might waste a little of flour, but you’ll gain a great deal of respect for your local baker.