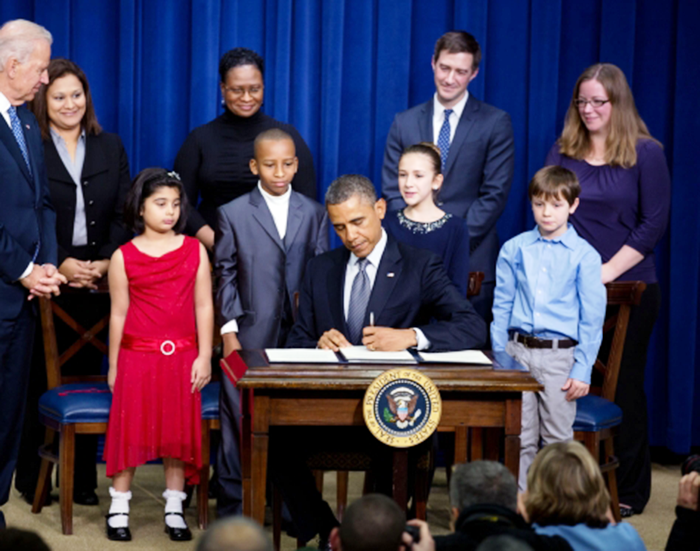 In the wake of Aurora, Sandy Hook, or any of the 16 mass shootings that occurred in the United States last year, people have finally started talking about gun control seriously.

While previously it was one of those issues that politicians avoided because, frankly, talking about it drove more voters away than it attracted, the gun control debate is now raging on at least one 24-hour news network at any given time of the day.

Obama and Biden have promised to make sure something is done and have laid out a fairly innocuous set of bullet points to start the ball rolling. However, despite the altogether mild nature of these first few step towards comprehensive gun safety in America, many Republicans and defenders of the second amendment have pledged to battle big government (some promising to literally revolt) every step of the way.

This is where I get lost. Obama didn’t sneak “taking all the guns away from everyone,” in between “starting a national, safe, and responsible gun ownership campaign,” and “reviewing safety standards for gun locks and gun safes.”

The executive actions put forth by the President hardly even mention guns themselves, aside from mandating that law enforcement organizations trace guns recovered in criminal investigations, which seems sort of like CSI 101 to me.

These executive actions push for more thorough background checks, increased gun-safety education, and the establishment of emergency response plans for public places such as schools. Regardless of which side of the aisle you sit on, these are good things. They augment public safety and are a good example of a president doing his job to promote the wellbeing of every American rather than promote one ideology over another.

“But wait,” I hear you say, “Czar Obama proposed Congressional action on guns too!” Let’s take a look at what those were, shall we?

Requiring background checks for all gun sales, effectively closing the private seller loophole: I just can’t understand why this causes such an immediate and vehement reaction from many on the right. We’ve established that some people shouldn’t have guns – convicted felons, people with severe mental illness, and a few other groups come to mind.

This is why we have background checks, but what is the point of having this system in place if the next Adam Lanza can buy an AR-15 at a swap meet with nothing more than several hundred dollars and a handshake?

Another contentious piece of suggested legislation is the reinstatement of the 1994 Assault Weapon Ban, which made most military style rifles and many handguns illegal based on certain criteria. Let’s be honest, these guns aren’t for hunting, they aren’t suited for self-defense, they are a hobby.

It may surprise you that I, the socialist, liberal, leftist whatever-you-wanna-call-me, participate in this hobby. That’s right, my family owns a couple assault rifles that would be illegal under the 1994 AWB, but I recognize that I really have no reason to have these very powerful and deadly weapons other than the fact that going to the shooting range and destroying a paper target is fun.

Guns are cool and we romanticize them in film, video games, and even American history, but my desire to have a fun hobby doesn’t outweigh the right to safety that everyone in America should enjoy. Oh, and before I forget, the 1994 ban didn’t involve federal agents going door to door collecting weapons in violation, it just stopped future sales, so stop this nonsense about Obama coming for your guns.

Finally, I want to briefly talk about the mental health side of the conversation. Yes, Mr. LaPierre, we understand that no gun has ever killed someone of its own volition. Yes, it does take a deranged person to walk into a school and open fire. Yes, we do need to have a look at how we handle mental health at a national level, and yes, we need to make a lot of changes.

However, there is no reason that we can’t have this conversation about mental health at the same time as the one on gun control. The way I see it, there were two separate problems that led to the tragedy of Sandy Hook. First, Adam Lanza had clear mental illness that went largely unnoticed and untreated.

Second, Adam Lanza had easy access to weapons that were capable of killing dozens of people. I’d like to think that as a nation we could recognize and deal with these issues individually in a way that doesn’t assume that every mentally ill American will be the next shooter. Too many people have quickly jumped onboard with the idea that autistic, bipolar, or schizophrenic people are dangerous and need to be watched. Adam Lanza didn’t need to be on some law enforcement watch list, he needed help, and simply putting him on a list would not have ensured hereceived that help.

To bring it full circle, we need to talk about gun control and mental health in America. We need to do this now, but we don’t necessarily have to talk about them in relation to one another. I’d like to hope that politics could step aside for public safety and wellbeing, but let’s be honest: This is America, land of the free and home of the diametrically-opposed, two-party political system, so let’s sit back and watch the discord.

Evan Wilson is a junior studying Cognitive Science and Biology. For him, politics is akin to watching a car crash: you know something awful is about to happen, but you can’t really do much now, so you might as well enjoy the show.