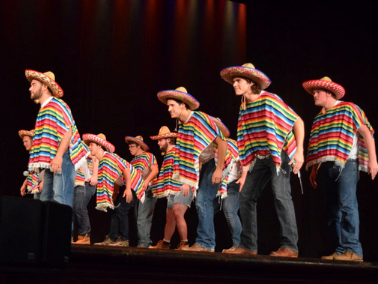 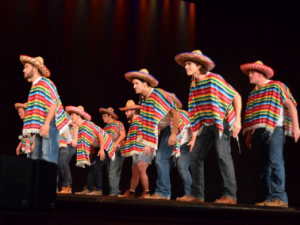 I am writing to discuss a recent act of racial arrogance on our campus and the Case Western Reserve University administration’s unwillingness to address it. As most of you know, last semester (April 2016) the Phi Delta Theta fraternity (Phi Delt) performed a skit where they dressed up, sang and danced as stereotypical Mexicans—in the style of a minstrel show. After concerned Latinx students issued a statement expressing how offended they were with the use of Latinx racist caricatures, the administration vowed to work with Phi Delt to help them understand why dressing up like an ethnic stereotype is offensive. The Interfraternity Congress and the Panhellenic Council, the umbrella organizations for fraternities and sororities on campus, worked with the Undergraduate Diversity Collaborative to offer a space for “dialogue and reflection” to the public, and the Greek Life Office hired outside consultants to evaluate diversity within Greek community as a whole.

This past Halloween, Phi Delt chose to do it again. A Phi Delt brother chose to wear the same anti-Mexican stereotypical costume that Phi Delt wore in their Variety Show last semester, implying that Phi Delt didn’t care about anything CWRU administrators and staff said to them last semester.

So let’s talk about what’s wrong with this entire picture. We assumed that after this second racially offensive act, the university would quickly communicate their disappointment with Phi Delt. But this time around, the administration has actually chosen to defend Phi Delt.

After the incident, I met with Mark Starr, the director of Greek Life, and I thought Starr would

support me, as well as all the Latinx students disgusted by this incident of anti-Latinx racism. I, in fact, had just been to Starr’s office to ask him to co-sponsor a panel discussion on Latin American immigration to the United States. Starr agreed to help sponsor the panel, and last year conveyed that he disapproved of the Phi Delt skit. It seems the political climate in our country and on our campus has changed, because this time around, Starr claimed that CWRU students can dress up as ethnic stereotypes because, as Starr explained it, they are protected by the First Amendment. Starr argued that he had a thorough understanding of the First Amendment because he used to teach law, and went on to explain that although the Phi Delt Halloween costume was distasteful, following the First Amendment meant that he and the university were in no position to do anything about a student’s “individual expression.” That’s right: Dressing up as an anti-Mexican stereotype is not a racist issue that the entire CWRU community should care about; instead, it’s an issue of “individual expression.” Starr added that he was not even in the position to address this incident, because, he claimed, this Halloween Party was not a Greek party. The president of Phi Delt, in fact, said it was at a football player’s residence and actually attended by many other football players. So it was a football party. Starr thus passed responsibility onto the CWRU Director of Athletics, Amy Backus.

I then met with Backus, who explained that it didn’t matter whether this was a Greek party or a football party, because in the end, Backus claimed that this incident was a case of an individual acting on their own accord and not an athletics-sponsored or team sanctioned activity. 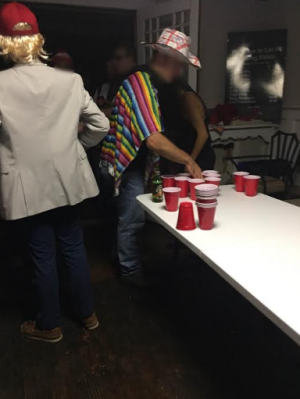 I was then advised to report the Halloween incident to the Office of Student Conduct and Community Standards (OSCCS)—which would organize a hearing between me and the Phi Delt costume wearer—and was soon invited to attend more meetings with administrators. Let’s be clear about the university’s tactics at this point—sending me to OSCCS, in effect, relinquishes CWRU administrators from doing anything about a student wearing a racist costume and transforms the entire issue into a dispute between two individual students. In this way, the university can claim that it does not have an institutional problem with racism, sexism, anti-LGBQT heterosexism, etc. So the problem isn’t interpreted as an institutional problem—it’s a problem between two individual students.

After having meetings with both Starr and Backus, I chose not to meet with any more administrators and asked Starr, Backus and then Associate Vice President and Dean of Students, Dean Patterson, to explain their thoughts on the Halloween incident in writing. In a message from Starr and Backus and in a separate message from Patterson, these CWRU administrators claimed they would need to follow “a course of due process” in order to make sense of the photograph attached to this letter. They also stated that they would need to keep meeting with me in order to discuss my “concerns or viewpoint” on the issue. In other words, the issue at hand revolves around my “viewpoint” of the photograph and not the photograph itself, which is included with this letter and which I sent to each of these administrators.

All of these CWRU administrators have eyes, they all know of the Phi Delt “funny Mexican” skit and they were all shown the anti-Mexican stereotypical Halloween costume. It is extremely difficult to imagine what they would possibly need to “investigate” at this point. Unfortunately we also have to ask ourselves how many students have reported racist incidents to Starr and Backus and how many students have been told that their concern is simply a First Amendment issue of “individual expression.” What these types of statements have in common is that they deny that it’s really an issue about race and racism, and highlight CWRU’s poor means to help students challenge discrimination on campus.

To be clear, in one very narrow sense, the administrators I spoke with were right to tell me that the Phi Delt costume wearer has the First Amendment right to “dress up” like a stereotypical Mexican. We have freedom of speech, and if an individual chooses to they can wear a racist costume. The problem with this argument is that being part of CWRU Greek Life and Athletics comes with extensive privileges and obligations. Among them is representing CWRU in a respectful manner, and right now CWRU administrators are telling me they have no problem being represented by students who ridicule Latinx people.

Let’s close our eyes and imagine a few scenarios and how our university might have responded differently. How would CWRU administrators respond if a Greek organization or a group of CWRU students wore blackface or “dressed up” as African Americans for a CWRU Halloween party? How would administrators respond if students “dressed up” like Orthodox Jewish people for a Variety Show and then, after they were talked to by CWRU administrators, chose to “dress up” like Orthodox Jewish people all over again for Halloween in that same year?

What if we expand the comparison further? If a group of CWRU students had chosen to “dress up” like stereotypes of Italian immigrants and then walked around Little Italy in Cleveland, how would Italian Americans have reacted to these students? How about if for Halloween CWRU students chose to “dress up” like stereotypes of Irish immigrants? Would the Irish American people of Cleveland find it “funny” that students are “dressing up” like their ancestors?

Sadly, I think it’s clear to the Phi Delt student who chose to “dress up” like a Mexican and to me that many people believe they can denigrate Latinx people in a way they can’t mock other ethnicities and racial groups. So why is this type of racist caricature tolerated when it comes to Latinxs? Are our lives and backgrounds not as significant as those of other people? Is this all simply a matter of political capital? It seems that our university may not be guided by the principle of justice but instead is only responsive to political capital. In Ohio, Latinxs simply do not have enough political capital.

I call on you, the reader, to decide. I have blurred out the face of the individual who wore the anti-Mexican stereotypical costume and the faces of his brothers who are all around him, because even though this student deserves to be exposed, this isn’t about him as an individual. I won’t allow the university to turn this into a dispute between individuals. I will not allow the administration to coerce me into accusing this individual of “harassment” when this is clearly not a case of harassment. This is instead a case of institutional racism against Latinx people. CWRU administrators need to treat the offices, departments, fraternities and teams who demonstrate racism against Latinx people the way they would treat racism against people who have more political capital than the Latinx population of Ohio.

In conclusion, I would like everyone who reads this to honestly ask themselves if a university can claim to “fully embrace” the “values of diversity and inclusion” and not see that there’s something fundamentally wrong with defending students who choose to “dress up” like ethnic stereotypes. Are you honestly telling me that you need a prolonged investigation to determine that there’s something wrong with dressing up like an ethnic group for Halloween? It’s becoming clear to me, that it’s on us, the CWRU students, to teach CWRU administrators and staff what is wrong with the attached photo. Apparently, they can’t “see” what’s wrong with it. If you go to a CWRU administrator after experiencing or witnessing an act of racial discrimination, ask them to acknowledge it and ask them to acknowledge it in writing. And if you have been silenced with their deflections, now is the time to speak up. The Radical Student Union, along with the other amazing student organizations on this campus, will support you and help you in fighting the racism, sexism and anti-LGBTQ heterosexism that occurs on our campus. If you are not directly affected by these issues, you can still help by calling out the university and demanding that it live up to the values it claims to represent. Write and call our administrators and share your stories with them—share your painful stories of racial injustice with them—so that the administration knows it can’t sweep these experiences under the rug: make them “see” the problem. Together, as students united against all of these forms of oppression, we can substantively change the world around us. Thank you.

Editor’s Note: The mentioned member of Phi Delta Theta underwent an internal judicial review process within his fraternity. This is separate from any administrative judicial action. The Interfraternity Congress Executive Board also referred the incident to the Bias Reporting System.