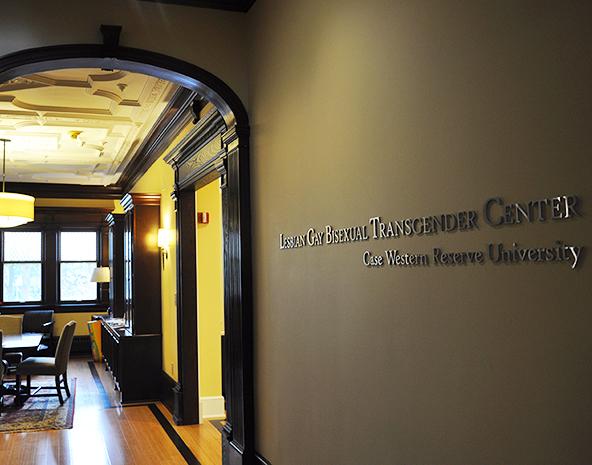 On Friday, Oct. 12, the Lesbian, Gay, Bisexual, Transgender Center celebrated its Ally Coming Out Party in the Thwing Atrium from 12 p.m. to 2 p.m. for the closing of Case Western Reserve University’s National Coming Out Week and the beginning of Ally Week.

The LGBT Center handed out 350 solid colored tee shirts arranged in the colors of the rainbow to promote strength and awareness, stating the phrase, “LGBT? Fine by me,” for its largest event of the semester. While CWRU students waited for the event to begin, the shirts disappeared within half an hour.

“We have a really supportive university, [and] a lot of supportive people on campus,” said Liz Roccoforte, director of the LGBT Center. “It’s really important to be visible.”

Once an ordinary, undefined study space for CWRU students, the spacious and well-furnished room parallel to the Thwing Atrium opened in October 2010 as the LGBT Center, a proclaimed safe zone for CWRU community members of all sexual orientations.

“This is the first year we’ve done a whole week of events like this and the first time celebrating Ally Week publicly through the LGBT center,” Roccoforte said. National Coming Out Day was officially celebrated on Thursday, Oct. 11, but the weeklong string of events promoted by the LGBT Center was unique to CWRU and other universities that celebrated. “We created the week to continue the theme,” she said.

Roccoforte and her crew of seven undergraduate staff members who identify as both LGBT and allies had been planning the event since August. They received co-sponsorship from the Interfraternity Council, the Panhellenic Council, the Undergraduate Student Government, and Share the Vision.

Part one of the two week long celebration included a trip to the Gordon Square Theatre on Monday night for “Standing on Ceremony: The Gay Marriage Plays,” the fourth annual LGBT Heritage Day Awards Ceremony & Reception at the Trinity Cathedral on Tuesday, a screening of “Gen Silent” in the Mandel Center on Wednesday, a s’mores social on the Leutner Pavilion with the Spectrum student organization for National Coming Out Day on Thursday, and finally the Ally Coming Out Party in Thwing on Friday.

“All of our programming and everything is really ramping up,” Roccoforte said. “Our attendance has steadily grown through all of our events in our programs…[and] I’ve noticed an increase in people who are just using the center for casual things.”

The celebration offered free food and educational flyers for the LGBT community and its allies, but the center of the atrium was dedicated to piecing together a rainbow wall of ally pledges to be displayed in the Thwing Atrium all throughout Ally Week. The event was not just about being supportive to those identifying as LGBT, but for those coming out as allies as well.

“The ally pledges are a statement of solidarity with the LGBT community, saying as an ally, I pledge to be supportive and I think that everyone deserves a safe space, and I will challenge homophobia when I see it happen,” Roccoforte said.

“This is good for people who aren’t out too. If they see this, they see the support they have in the community from the people who are not part of the LGBT community, but from the broader community. It really helps them feel less alone,” she said.

“Coming out week is a time of acceptance,” said Zachary Galliger, President of Spectrum, who was present at the Ally Coming Out Party. “It’s a time where the community really comes together to say you’re surrounded by love, you’re surrounded by friends, no matter what – so be yourself. It’s also a great opportunity to come out as an ally,” he said.

“The definition of ‘ally’ is over there,” Roccoforte said as she pointed toward the wall that was quickly accumulating sheets of rainbow-colored pledges. “You can be LGBT and still be an ally. We all know that people within a group are not always allies to each other, so we can still pledge to support each other.”