Link-State and ACM: a conference and an organization with big plans for CWRU Computer Science 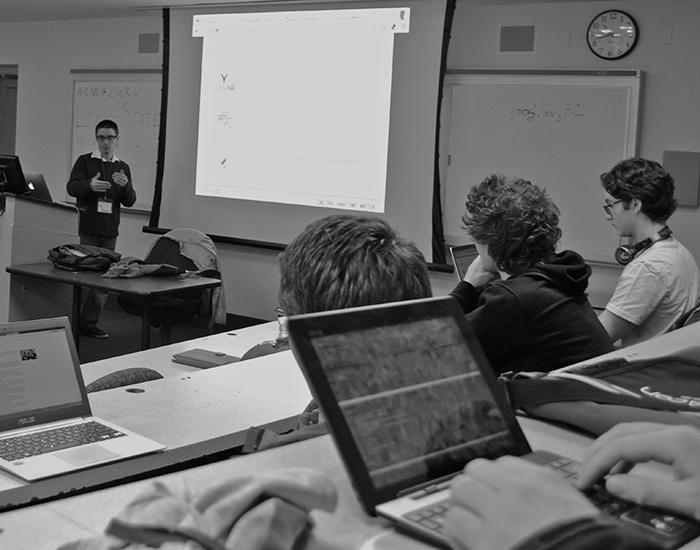 It’s cold and raining at 9 a.m. on Oct. 27. Despite the weather, people are gathering at Nord Hall. They are here for the first Link-State, an annual conference held by the Case Western Reserve University chapter of the Association of Computing Machinery (ACM), a computer science society.

All of the roughly 50 attendees are excited. There hasn’t been an event like this before. Entirely student-run, the conference has brought in a half-dozen speakers from companies both local and nationally recognized, like Yelp, Google, and Microsoft.

ACM President and computer science senior Brian Stack is the man behind the event. He told me that the original inspiration for the conference came when he and several other members of the CWRU ACM chapter went to an ACM conference held at University of Illinois Urbana-Champaign. “We went down and had a really good time, and it was really just a kind of cool experience. After, we were on the bus back and we said, “Why don’t we just do that?” Now, several months later, they are running that conference.

“Link-State is an algorithm that is used in network routing,” Ian Dimayuga, the person responsible for creating the title, told me. It’s an appropriate name, as ACM is very interested in the conference being more than just a bunch of CWRU students. “We are a community of computer scientists within the school that computer scientists outside the school would want to connect with,” he said.

The enthusiasm for the event was not confined to the students at the event. “I’m pretty thrilled with the turnout [Link-State] got,” said Fret Hatfull, a Yelp software developer. A former CWRU student and former president of CWRU ACM, Hatfull was very passionate about what he saw around him and has high hopes for what ACM can do in the future.

“When I got here [my freshman year], there was basically nothing. I guess there was an ACM chapter. I never heard or saw anything from them, save for a four-year-old posting on a billboard in Glennan…and today, we just [had] a conference,” he said.

ACM also wants to contribute towards improving the experience of computer science students at CWRU with events and programs other than Link-State. “The curriculum here is very theoretical, which I think is excellent. It’s what I came to school here for, but there’s another very fun half of computer science which is building stuff,” Stack stated during the conference’s lunch break.

To give students a way to explore building with code, ACM is looking into buying a server to provide students with an accessible new way to play with and learn about code. They also want to start doing hack-a-thons, which are coding parties and competitions where programmers can come together and learn from each other. “Having resources here, like the server or even just knowledgeable people that have been around the block, that have written nontrivial pieces of software, I think is really invaluable,” said Hatfull. “It’s really when you force your mind to bend and get exposed to things that you aren’t comfortable with that you start learning a lot.”

Flush with the success of their first event, ACM is clearly going places. All the members are thrilled with the possibilities for future events and can’t wait to get started. When I left at the end of the day, after everyone else was gone, all the ACM members were still there, clustered around a whiteboard, planning for next year’s event.