The ducks have flown 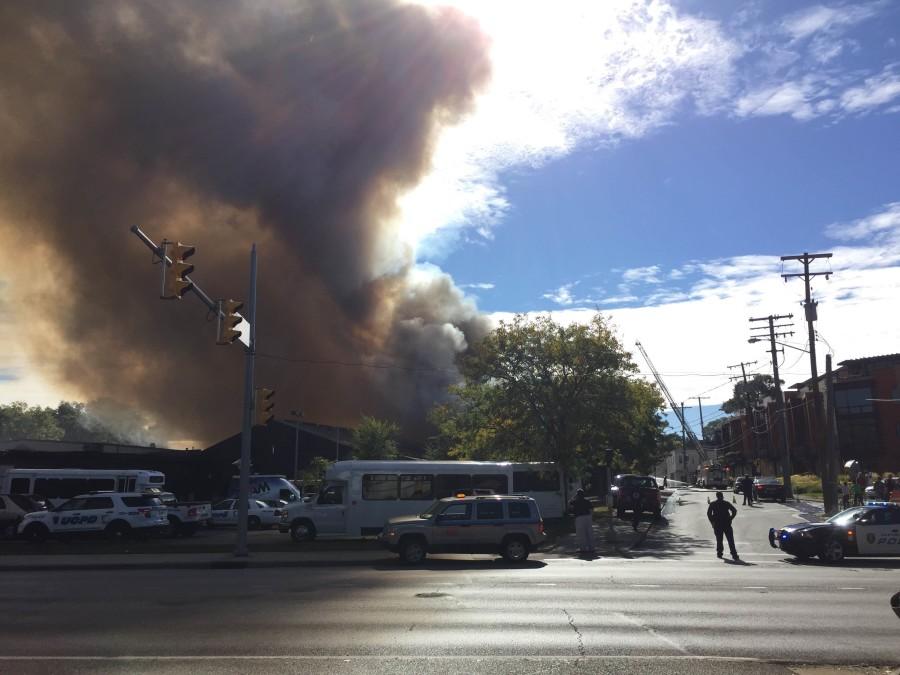 The smoke coming from the warehouse was seen from blocks away by CWRU students.

On the morning of Sunday Sept. 27, Little Italy’s abandoned “rubber duck factory,” known for the hundreds of rubber ducks left there years ago, caught fire. Hours later, smoke was still billowing from what remained of the building.

“I went outside, and saw people standing there,” said Randall Hoyle, a Case Western Reserve University graduate student. “I could see that the sky was filled with black smoke.”

Much of his street left their houses and apartments, mingling in the road as they watched flames and smoke overtake the sky above the former Woodhill Supply Inc. warehouse. He wasn’t scared, thinking at the time that perhaps it might be a controlled burn.

As of press time, the cause of the fire is still unknown. Of the 50 firefighters involved in quelling the blaze, one was injured by smoke inhalation.

Paul Sulser, a CWRU third-year student, also lived near the building. The warehouse was on a one-way street, just up the road from Sulser’s apartment, so he drove past it every time he came home.

“I wasn’t a huge fan of it being there because it seemed like it would draw in rough characters,” said Sulser. “It didn’t seem like the safest thing to have.”

Sulser heard sirens rushing to the building while he was still in bed, and saw a firetruck across the street from his apartment.

He and his roommate went out to see the old building burn. By the time they got there, the responders had dealt with the worst of the flames. They could see some of the firefighters who had come to suppress the flames shooting water into the smoke still swelling from the building.

“The firefighters were there for hours afterwards,” said Sulser. “The road was closed at 3 p.m. when I was trying to drive back up. And the trucks finally left around seven.”

Dale Kiefer, a CWRU fourth-year student, was working at MOCA when he noticed the smoke. He initially thought that it might be near the train tracks, so he called his roommate who frequently takes the rapid.

Then he and some coworkers wondered what would happen if it spread, if there was an evacuation plan they should follow.

“We thought, ‘it definitely looks like a big fire, what if it spreads this way?’” he said.

Others who witnessed the smoke clouds feared that the fire originated in The Village at 115 apartments or Lot 46. It seemed that the further away bystanders watched the fire, the more afraid they were.

Hoyle reiterated that he never felt afraid. Instead he regrets that he never had the chance to explore the locally famous landmark. Filled with rubber ducks and massive graffiti artwork, the building was a popular urban exploring destination.

“I used to drive by the place in my car, past the gaping hole,” he said. The hole was tagged by a local spray-painter with the phrase “Gaping Rectum” directly above it.

Hoyle laughed. “Now the whole thing is a gaping rectum,” he said.