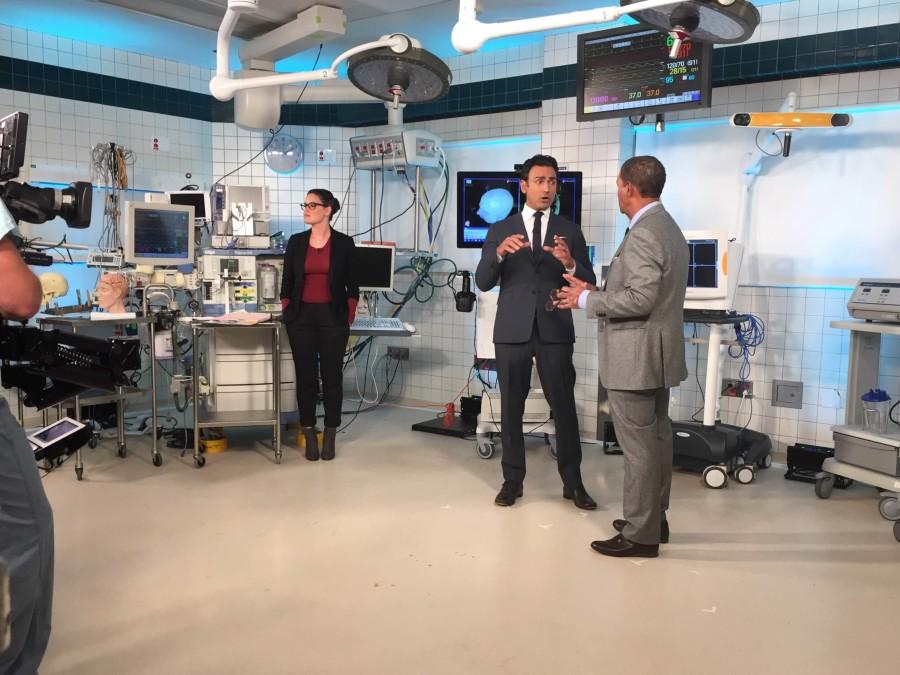 In University Hospital's media room, employees from Mental Floss and National Geographic worked to make sure the broadcast went smoothly.

On Oct. 25, television cameras recorded an operating room in University Hospitals (UH) as a surgical team consisting of two neurosurgeons, a neurologist and half a dozen nurses prepared to perform the first ever live brain surgery on Greg Grindley, who suffered from Parkinson’s disease. The surgery was broadcasted through the efforts of National Geographic and Mental Floss.

Viewers in over 170 countries were able to watch when, after six hours of almost totally unbroken concentration on the part of the surgical team, Grindley was able to control all of his limbs for the first time in 10 years.

The operation, for which Grindley was kept fully conscious, is officially known as a deep brain stimulation surgery because of the method in which electrical stimulators are strategically placed inside of the brain.

“Not a lot of people know what this procedure means,” said Will Pearson, president of Mental Floss. “So part of the goal of this was trying to educate the public and sort of demystify brain surgery. I’m thrilled to see how it all came together…I think it was a success, and it was thrilling to see on social media how many people responded to it.”

“It was exciting to see something this amazing live on TV when it’s happening so close to CWRU,” said Shirke.

“The live DBS surgery portrays the success of technology and human spirit in overcoming the odds and helping people who have diseases—such as Parkinson’s—to have an easier life,” she added.

Inside the University Hospitals media room

As people in the UH media room were preparing for this groundbreaking surgery, there was a low, steady stream of chatter, and those present alternated between typing furiously on their laptops and gazing up at one of the two large televisions mounted on the walls. Empty coffee cups, open bags of junk food and soda cans littered the tables already covered with paper and telephones.

There were a few moments of tense worry leading up to the surgery, such as when one man muttered, “the audio still isn’t working.” But each moment soon dissipated as the problem was solved.

As dramatic music played and the TV screens cut to a live shot of the Seidman Cancer Center, a total hush came over the room.

During the surgery, the hashtag #BrainSurgeryLive was the third most popular trending topic on Twitter in the U.S. From the UH media room, National Geographic’s social media team typed away non-stop on their laptops, responding, with the help of a couple of doctors nearby, to questions and statements tweeted live from viewers.

One tweet particularly touched the National Geographic team: “#BrainSurgeryLive thank you for doing this show. I have essential tremors and was freaking out about the idea of DBS but you have calmed me.”

“This is why we are doing this, for people like this,” said Senior Vice-President of Communications Worldwide & Talent Relations at National Geographic Christopher Albert, who was leading the magazine’s behind-the-scenes efforts the night of the surgery.

Fourth-year students Leina Lunasco and Austin Olshavsky worked closely with Mental Floss and National Geographic to set up this event.

Lunasco was responsible for escorting the main personalities running the show to and from various locations in the hospital.

“Being with the Grindley family as they witnessed Greg’s tremors stopped was a beautiful and emotional experience,” said Lunasco.

“[Although] the first couple of days were pretty rough—I believe Austin and I worked about 12 hour shifts—[to me] as an aspiring physician, to see the direct impact of modern medicine was incredibly moving and motivating,” she continued. “I hope to [similarly] impact many lives over the course of my career. When accepting the job last month, we had no idea what we were getting into, but it was all worth it in the end.”

Olshavsky worked primarily as security for the operating room.

“The whole filming process was unbelievable,” he said. “The amount of prep work that goes into it, and then seeing it all come together on the day of [was incredible]…because you can’t really practice a surgery.”