Local democrats pass the torch on to young voters 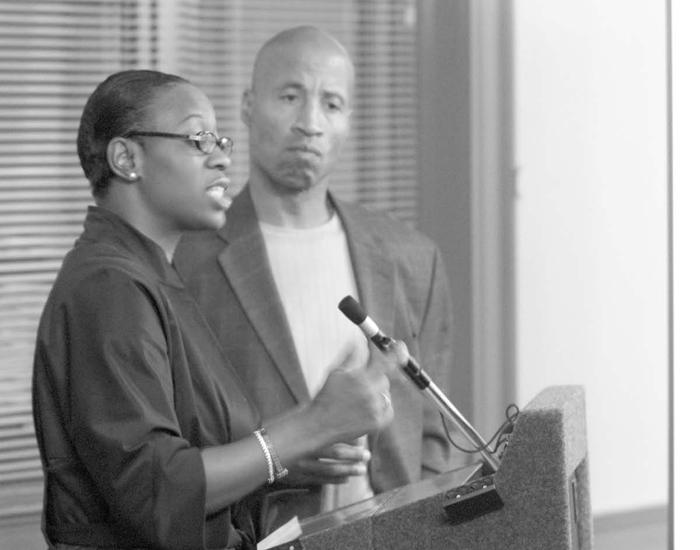 Cuyahoga County commissioner Peter Lawson Jones and state senator Nina Turner arrived on the CWRU campus to speak at “Dinner with the Democrats” this past Friday, Oct. 8 in the Thwing 1914 Lounge. During the dinner, sponsored by CWRU Democrats, the speakers talked passionately about the importance of the generation of current college students to politics. Besides speaking, Jones and Turner introduced themselves to the students who attended the event. After about an hour of mingling, Jones took the floor first.

“It’s good that we had the (young voter) turnout that we did in 2008, but the question now is, what’s it going to be like in November 2010?” Jones asked during his speech. He warned that while voters aged 18-25 made their strongest showing ever in the 2008 presidential election, they need to stay enthusiastic and committed to politics. That generation cannot be a “one-hit wonder,” as the need for civic engagement in Cleveland and many other places is higher than ever before.

Jones suggested that one way to become active is to find an issue and an elected official that truly captivate you and work with that official in some way. He stressed the importance of taking advantage of current leaders’ mentorship to learn how to shape policies that help one’s community. Jones also stressed the importance that came with holding elected office. “You need to understand that you weren’t born with these titles…and the thing you have to do is pave the way for others to come after you,” he said.

Jones also challenged politically motivated students to “turn on those who have been turned off by politics.” Even he admitted that today’s culture makes it all too easy to become “turned off.” One of the main reasons for this, Jones theorized, is the tone of many modern political campaigns. He said that before he left his home to come to the dinner, he saw six advertisements for political candidates, all of which were negative ads. Jones claims that this brand of politics, which Turner later labeled “gutter politics,” is the reason why so many young people are driven away from the political scene.

Jones concluded his speech by saying that after 30 years in politics, his generation’s time is up. It’s now the responsibility of the new voters’ generation to learn how to lead and influence policymaking. He urged the crowd to “be honorable and place public policy over politics.”

Case Democrats president Neil O’Brian introduced Nina Turner as “one of Ohio’s true advocates of public interest.” Turner represents Cleveland’s Ward 1 in the Ohio Senate, an office she won in the 2008 election. In the beginning of her speech, she related Jones’ words to a popular political axiom: “Politicians care about the next election, but statesmen care about the next generation.” Turner advised that the young voters’ generation should strive to be statesmen in that sense, fighting to bring benefits to one’s community rather than just oneself.

Turner referenced Langston Hughes’ 1951 poem “Dream Deferred” in lamenting that many kids in Cleveland have “their dreams deferred” when it comes to education. She talked about the adverse effects of poverty on inner-city schools, including the inability of many families in the area to afford higher education for their children.

However, Turner also addressed other sociological factors. Poverty-stricken urban students simply aren’t well-suited to learn in their environments. She mentioned that teachers are “stuck” in the same situations as the parents of the students they teach. This inhibits teachers from immersing themselves in their work and motivating young students to succeed in school.

At the conclusion of the event, both speakers fielded questions about their policies and experiences as officeholders in the Cleveland area. One student asked Jones for direction on whether to take time to pursue other things between undergraduate school and law school. Jones captured the essence of the evening in his response. “Live elsewhere for a while, bring your skills back (to Cleveland), and help make this an extraordinary community,” he said.