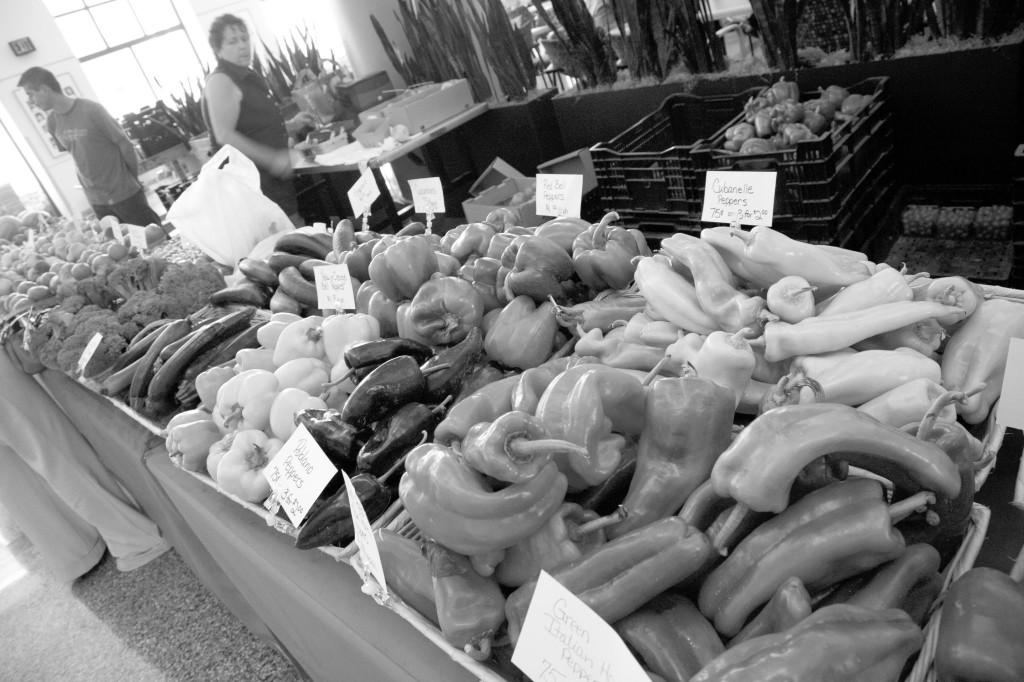 Last Monday, several tables in the Biomedical Research Building were spread with a rainbow of seasonal produce, including corn, onions, broccoli, eggplant, zucchini, potatoes, and green beans. There were also three varieties of tomato, seven types of pepper, and a variety of festive miniature pumpkins and squash. And although this week’s harvest was primarily vegetables, there was a limited selection of fruit, including peaches, pears, gala apples, and small watermelons. Everything was grown and harvested locally at Rainbow Farms, a 35-acre family-run operation in Madison, less than a mile from Lake Erie.

Husband-and-wife owners Larry and Tina Klco started Rainbow Farms 27 years ago. They now farm a total of about 70 acres, both their own property and rented land, with the help of their four children and around 15 part-time employees. As a teenager, Larry got a job at a farm to help support his parents and ten siblings. He enjoyed the work so much that he went on to attend Ohio State University’s Agricultural Technical Institute (ATI) to learn how to start his own farm. Tina also went to ATI to study landscaping and nursery design. Now the Klcos have been successfully running Rainbow Farms for nearly three decades, and they love what they do.

It takes a lot of work, according to Tina, although it depends on the time of year. The Klcos start working eight-hour days in early spring, then the workload gradually increases, peaks at 16 hours a day, and tapers back down in the fall. The off-season consists of January and February, during which the couple is unpaid but still busy with seed purchasing and machinery repairs. Tina says it takes careful planning to get through the off-season with no income.

Considerable planning goes into the rest of the year as well: the Klcos like to stagger their planting so that, rather than harvesting an entire crop all at once, they harvest a fresh batch every week or two. In fact, they are just getting ready to plant a new lettuce field, says long-time employee Matt Cortelli. Like everyone the Klcos hire, Cortelli works for Rainbow Farms seasonally and part-time; during the winter he has another job at an accounting firm. Cortelli handles a number of tasks at Rainbow Farms, including sales, irrigation, and tractor work. The longer you work at Rainbow, says Tina, the more you learn to do, and the more varied your responsibilities.

Depending on the month, Rainbow Farms offers various pick-your-own fruits and vegetables: strawberries in June, raspberries in July, and tomatoes and peppers in August. They also host an onsite indoor market Monday-Saturday 10 a.m. to 6 p.m. from May to November. The farmers’ market in the Biomedical Research Building (behind Rainbow Babies Hospital) will continue through November, every Monday from 11 a.m. to 1:30 p.m.