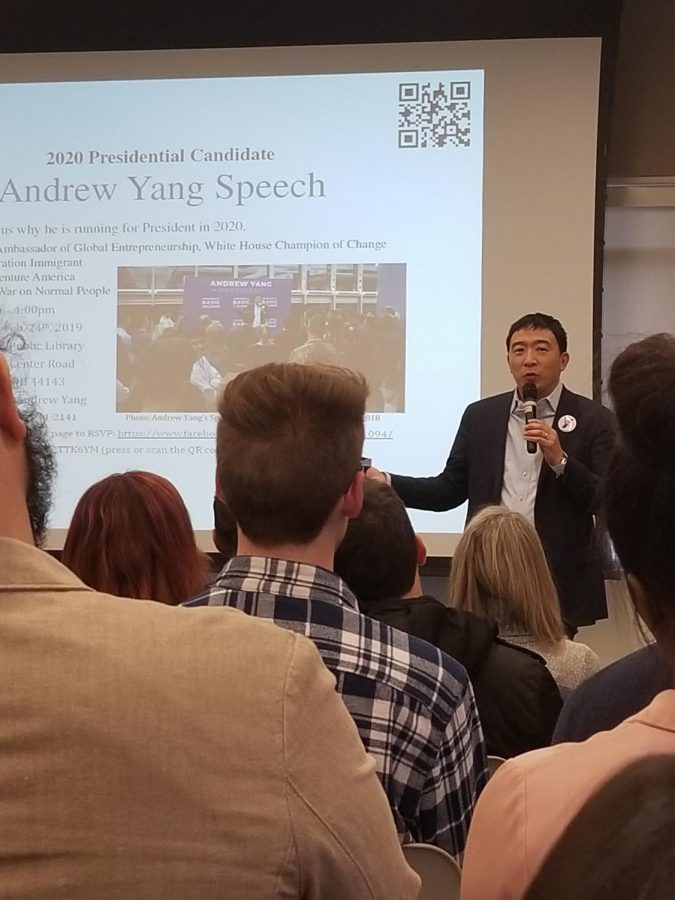 On Feb. 24, Andrew Yang, a candidate for the Democratic nomination for president, spoke to a packed room at the Mayfield Branch of Cuyahoga County Library about his 2020 presidential campaign and platform.

Yang has been flying under the mainstream media’s radar for the most part, with Fox News arguing he has been “overshadowed by an already-crowded field of senators and other famous politicians.” However, Yang and his team embrace this claim, proclaiming that they are polling at one percent nationally, yet no one knows who they are.

Yang is most notable for his Universal Basic Income plan called the Freedom Dividend, which will allocate $1,000 a month to every adult citizen with no strings attached. The purpose of this plan is to channel more money into local economies of cities like Cleveland or Detroit. The ultimate plan is to create a more human-centered form of capitalism that focuses on topics like childhood success rates, quality-adjusted life expectancy, mental health and freedom from substance abuse.

Artificial intelligence (AI) is another focus of his campaign. He sees the potential that AI has for eliminating thousands of blue collar jobs, such as trucking. Truck driving is the most common job in 29 states, including Ohio, but in Silicon Valley there are engineers working on creating “robot trucks” that can drive nonstop and outcompete drivers, rendering them obsolete. Yang stated that once truckers leave the workforce there is a low chance of them returning, and government funded worker retraining programs have a 0-15 percent success rate. Yang shared that when he took these concerns to Washington, the response was that they could not talk about it.

Yang argues that the huge Silicon Valley tech companies that are eating up blue collar jobs are not sustainable, and the American government has to create a better system that gives the American people a shred of the profits that tech companies are seeing. Yang believes that “the dynamics of our economy have been corrupted to a degree that we do not realize.”

His Freedom Dividend, a policy supported by historical figures such as Martin Luther King Jr., Milton Friedman and Thomas Paine, as well as popular politician Bernie Sanders, will impose a tax on big tech companies that will harness the substantial gains from the growing industry and allow all American people to benefit from them. Yang believes that this $1,000 dividend will create incentives to push the economy forward, and eventually create a “trickle-up” system.

At Yang’s talk at the Cuyahoga County Library, concerns were raised over who exactly would profit from this dividend. Yang responded that his plan would be “opt-in,” so everyone, from those making $50 thousand a year to those making millions of dollars would see the rewards of his plan. He stressed that particular people in the system should not be villainized, rather it is the system itself that is the enemy.

Yang believes that his biggest obstacles are being marginalized and ignored because of his status as an entrepreneur with no political background. He has expressed that there is no specific enemy, maintaining that the system is wrong, not the people in it. Yang is garnering support from both sides of the aisle, but he is still portrayed as an outsider trying to fix problems: “the opponent is [us] being pushed to the side.”

A large part of Yang’s policy is managing dysfunctional systems like healthcare, education and housing. He wants to take healthcare off of people’s backs and align incentives for healthcare providers in order to give quality and affordable care. He would enact a Medicare for All policy, which would grow the program to cover all Americans and work towards reaching a single-payer solution.

Education is also one of the primary problems in America that Yang has identified. He would like to link college tax exemption and funding to the goal of reducing costs to students. In addition, he would create a 10×10 Student Loan Emancipation Plan: graduates who donate 10 percent of their salary for 10 years to repayment will have the remainder of their loan forgiven. When asked about the inflation epidemic driving up costs of higher education, Yang told The Observer that in general college is “overprescribed.” He argues that the government needs to increase investment in apprenticeships and vocational training instead.

As he continues toward the 2020 presidential election, Yang hopes that other candidates will adopt some of his policies and address the problems that emerge as workers have to adjust for an economy where AI absorbs many jobs.