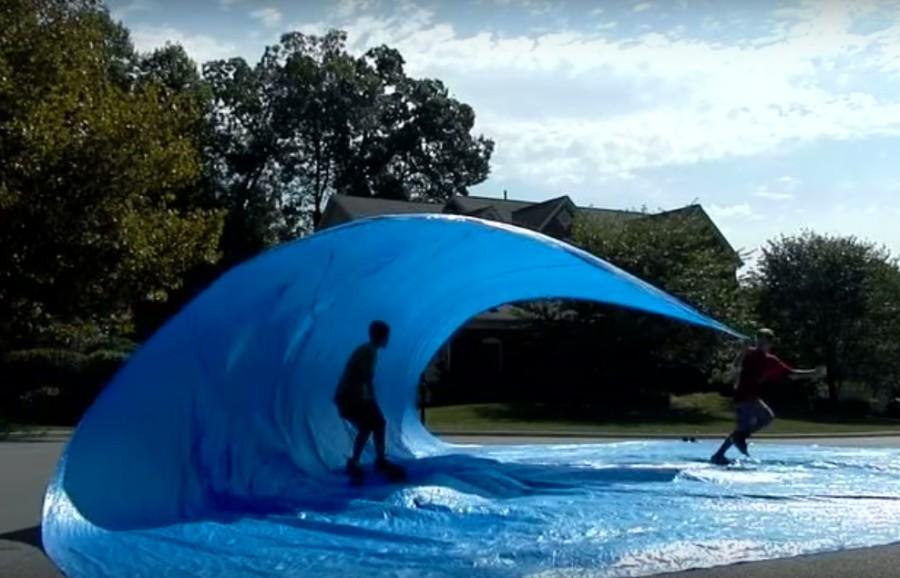 Tarp surfing simulates a wave for longboarders to roll through.

On Sunday, Sept. 27, the Case Western Longboard Club will be hosting its first ever Tarp Surf event.

And for those unfamiliar with the term, tarp surfing is pretty much exactly what it sounds like: longboarders roll over a long, blue plastic tarp, while other people pull the tarp over their heads, forming a tube which longboarders must roll through.

Though tarp surfing involves a lot less skill than surfing (after all, no water is involved, and the “surfer” is only rolling over flat ground), the spectacle of the event is what creates its draw.

Fantin and other members of Longboard Club were inspired through popular Youtube videos which showed off the new activity. “It’s more of a social event,” said Fantin. “There’s going to be a lot of time people are sitting on the side waiting, watching.”

Longboard Club purchased a 2,500 square-foot tarp, which they will reuse for future Tarp Surf events. Tarp Surf is the club’s fall semester event. It mirrors their Hangout event in the spring, co-hosted with Hammocking Club last year.

The event will be held at the Denny’s basketball courts, and the club will have longboards for newcomers to borrow. Food will be available, along with prizes and giveaways. Their event is sponsored by various longboarding and health groups, including Landyachtz Longboards and Loaded Boards.

To fully understand Tarp Surfing, it sounds like a ‘you have to be there’ type of event. However Fantin thinks anyone can get a taste for it. “If you want to get the full sense of what it is, and if you have an hour to spare, you can watch Youtube videos,” he said.