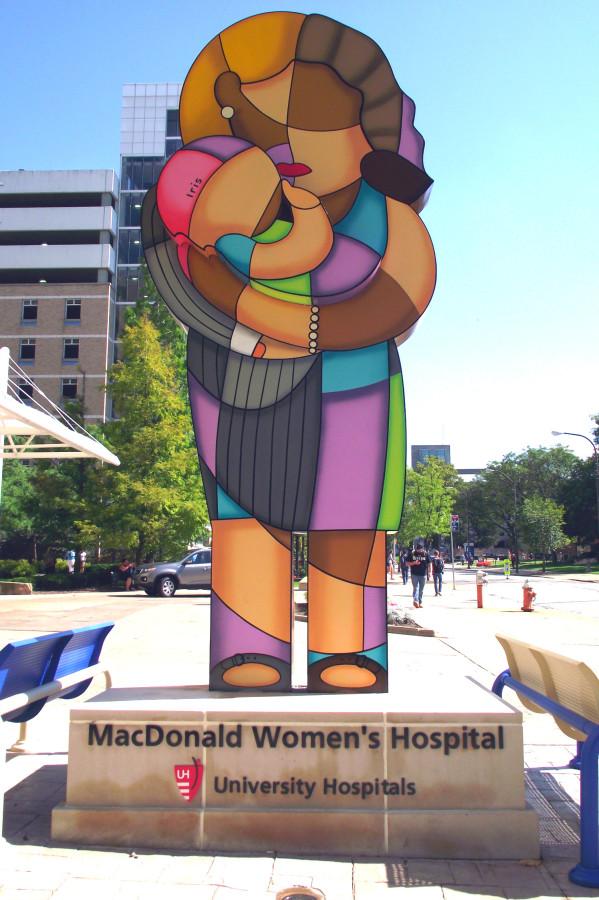 On the new statue “Where Hope is Born,” the baby's hat reads "Mort" on one side and "Iris" on the other in honor of the donors who funded it.

The team that created Rainbow Babies and Children’s Hospital’s iconic statue, “Where Dreams Come True,” is at it again. Recently a new statue, “Where Hope is Born” has been erected nearby to welcome patients and their families to the MacDonald Women’s Hospital.

The piece is a collaboration between philanthropists Iris and Mort November, artist Hector Vega and Senior Development Chair of University Hospitals Pat Swenson.

“We figured we needed something to show that this is MacDonald Women’s Hospital,” said Swenson.

In addition to the statue’s practical function, “Where Hope is Born” was designed with creative meaning and significance in mind.

“The statue celebrates women of all cultures and professions,” said Vega. “The woman has different skin tones, multi hair colors and types. She wears both a dress and a business suit representing stay at home moms and working women.”

The woman carries a baby wearing a hat that reads “Mort” on one side, and “Iris” on the other, a tribute to the statue’s donors.

Hector Vega is also dedicated to supporting children and has been donating his paintings to benefit children’s charities for years.

“We chose Hector because he shows the love of children that my husband and I possessed,” said Iris.

The Novembers, Swenson and Vega’s relationship has history. They worked together on the mosaic statue outside of Rainbow Babies Children’s hospital titled “Where Dreams Come True.” This statue was unveiled on Dec. 12, 2008 and has become a distinguishing symbol for Rainbow Babies.

Vega and the Novembers have also worked together on projects “Growing Love” (at the entrance of the Women & Children’s Pavilion at MetroHealth) and “Flowers on the Plaza” (at the Ronald McDonald House on Euclid Avenue).

“We loved being involved,” said Iris. “Hector has become one of our dearest friends.”

Vega is a self-taught artist and began painting when he was eight. He shared the story of his first art sale as a kid.

“My mom gave me a canvas to paint to cover a hole in our apartment,” said Vega. “When we moved out, the owner wanted to buy it.”

Vega currently works for Cleveland Metropolitan Housing Authority in construction management and describes art as his hobby. Vega’s sculptures can be found all over the city, and his paintings are all over the world. He is especially known for his paintings of cityscapes of Cleveland. This September, Vega painted a seven-foot mural on Cedar Road with the CWRU community as part of Case For Community Day.

“Where Hope is Born” took about a year and a half from start to finish according to Vega.

“There were a lot of meetings” he said. “Mort and Iris would give me feedback, but they’d also give me creative freedom.”

Swenson and the development team were also involved in the early conceptualization process.

“It’s about a collaboration between the donor, the artist and the facility, and it’s a wonderful working process,” Iris November said.

Throughout the construction of the piece, Vega worked with engineers, manufacturers and a team of painters. Unlike the concrete and mosaic statue in front of Rainbow Babies, the newest piece is painted and constructed with aluminum and other metals. It weighs over a ton.

Vega, Iris November and Swenson were all enthusiastic about the end-product.

Iris beamed. “It was just brilliant what he did, and we were incredibly excited about it,” she said.

Vega too was proud of his work, calling it his best work to date.

“When I first told people about the idea, they thought I was nuts,” said Vega. “Now they understand.”

Swenson was excited about the new visibility of the Women’s Hospital.

“A sign is just a sign, but a Hector Vega piece is really an icon,” said Swenson.

Though all three individuals were excited about the piece, the end of the project was bittersweet. Mort November passed away this July, just months before the statue was completed.

“I was brokenhearted when Mort passed away,” says Vega. “He really believed in me.”

Swenson said, “Mort was a lot of fun.” She remembers dinners at restaurants, where Mort would always tell the waiter it was her birthday.

The philanthropist, father and husband was 88.

Iris spoke with determination about the November Philanthropy.

“We do a lot of philanthropy, we’ve done it over the past 30 years and we will continue to do it in Mort’s memory,” said Iris November.

A dedication ceremony for the statue is currently being scheduled. Swenson, November and Vega plan to attend.