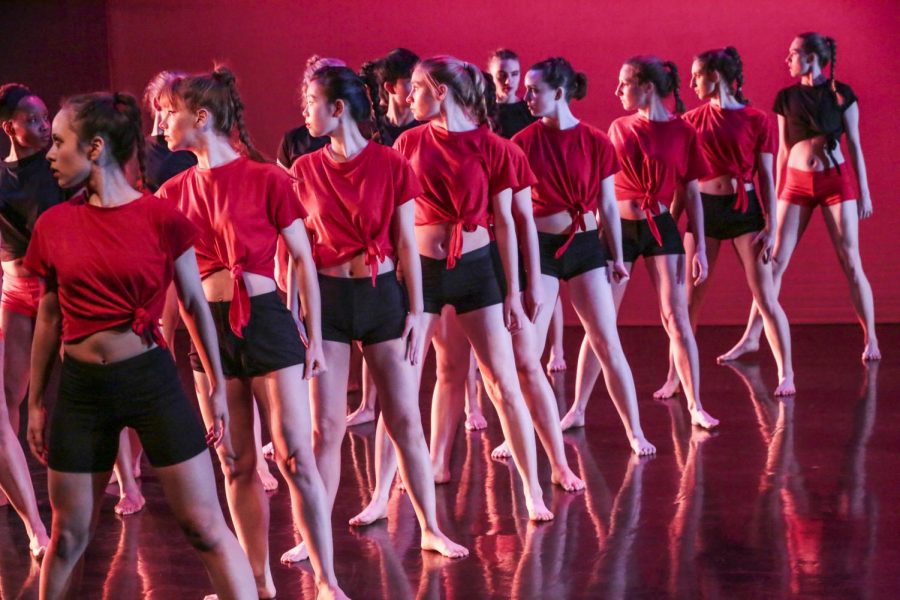 At the center of a pitch black room, a solitary orange spotlight illuminated a shapeless figure writhing and contorting to the sound of dripping water, scraping metal and distorted mumbling. The scene could have come straight from the script of a Ridley Scott film, but this event didn’t take place in a secret lab; it happened in Mather Dance Center last Thursday through Saturday.

Rather than a spectacle of sci-fi horror, the scene forms part of “Metamorphosis,” one of the four dances featured in this semester’s production of Mather Dance Collective (MaDaCol). The Department of Dance produces MaDaCol once a semester, and the collective is one of the University’s oldest and largest undergraduate student organizations. This semester’s production ran from April 19-21.

MaDaCol is no ordinary dance performance. Participation is open to the public, and everyone is invited to audition: students, faculty and even members of the greater Cleveland community. No experience or affiliation with Case Western Reserve University is required, making this a unique opportunity for choreographers and dancers alike.

“I’ve worked with people who have two left feet, who don’t know their right from their left,” Karina Browne, a CWRU almuna and MaDaCol choreographer, said, “As a choreographer, it’s my job to figure out what strengths they have.”

For students, participating in the show is a different experience.

“It’s a really good way to get to know a huge variety of people. One of my best MaDaCol friends is a grad student here [at CWRU],” said Viviane Finke, a third-year student who participated in her second MaDaCol.

The choreographers host an open audition at the start of each semester, consisting of a warm-up class to teach participants the basics of dance, followed by more technical instruction from the choreographers. Afterwards, the auditioners choose which dances they want to participate in and choreographers make an effort to accomodate everybody. The participants practice once a week leading up to their performance at the end of the semester.

Yizhen Hu, a second-year graduate student, choreographed the first dance of the night, “Steal the Thunder.” The piece featured two groups of nine dancers wearing inverted colors: one group wore black shorts, red shirts and a red dot in the middle of each dancer’s forehead. The other group wore the opposite.

The dancers whirled around the stage in pairs and groups, taking up combative stances and performing dramatic falls to the tune of music inspired by dramatic Chinese operas, according to Hu. The piece, a high-octane action sequence, meant to show that two sides can argue passionately for opposing points while still respecting each other.

The next dance, “Metamorphosis,” featured choreographer Xiaomeng Zhao. Zhao, a second-year graduate student studying contemporary dance, gave a performance no one in the audience is likely to forget.

To the sound of dripping water, scraping metal and distorted voices, Zhao moved about the stage in a gauze cocoon. Eventually breaking free, Zhao tried in vain to get back inside before finally walking offstage into a bright orange light, leaving the space dark and empty except for her shed cocoon.

The piece is symbolic of the journey of struggle, growth and longing for the familiar while adjusting to a new environment. The ending is meant to signify that growing is ultimately the only way forward.

“I think my favorite part [of the piece] is the environment I create for the audience,” Zhao said.

Zhao’s next piece, “Go,” featured two groups of dancers, one in white costumes and one in black. The piece, inspired by the ancient Chinese board game of the same name, featured a confrontation between the two groups. The music swung back and forth from pensive drum beats to tense, exciting strings as the dancers faced off in pairs and groups.

The struggle displayed in “Go” feels significantly different from “Steal the Thunder.” “Steal the Thunder” had dancers frequently lock limbs and physically strain against each other, while “Go” displayed a battle of wits, with the dancers spinning and and trying to outmaneuver each other.

The final dance, “Pounding the Pavement,” ended the night on a whimsical note. Choreographed by Browne, the dance brought the streets of 50s New York to life. Female dancers wore long, colorfully patterned skirts, and the men were well-dressed in slacks and dress shirts.

The dancers mimicked tasks like auditioning for the next big musical, going to work and flirting with each other. The men moved to the tune of bold, brazen horns while the women were accompanied by smooth jazz and piano. Overall, “Pounding the Pavement” had the flare of an old Hollywood production.

“It was unlike anything I had ever seen before, and I’ve been to plenty of dance stuff,” first-year student Kalan Hurdle said. “It was really creative and unique.”