Maker Faire brings innovation and technology to the public 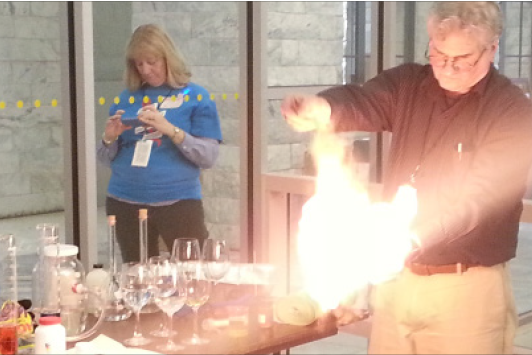 Presenter at MakerFaire 2013 demonstrates a chemical reaction. The annual event is free and open to the public.

The Maker Faire aims to “celebrate the processes of learning and doing and to share discoveries, curiosities, inventions, innovations and ideas,” and it fits in with Cleveland’s developing DIY spirit. Cleveland was recently named by Slate as a potential place to move Silicon Valley. It’s abound with institutions such as the Cleveland Public Library and Case Western Reserve University, where people have access to new technology such as 3D printers that are available in the TechCentral at CPL and think[box] at CWRU.

At the Maker Faire, there will be workshops for people of all ages, ranging from solar flowers how-to’s to a “LAN Party,” where people gather to play multi-player video games. Online signups for the workshops are available on the Cleveland Maker Faire website at makerfairecleveland.com.

In addition, there will also be exhibits from various companies and people, featuring their own inventions and products. CWRU’s own think[box] is doing a joint exhibit with Bird Technologies, showing people how to put together an EMG device, which displays the electrical signals in muscles. Rovar, a platform that makes augmented reality campaigns is also allowing the public to try on Google Glass.

The Cleveland Mini Maker Faire is free to the public.