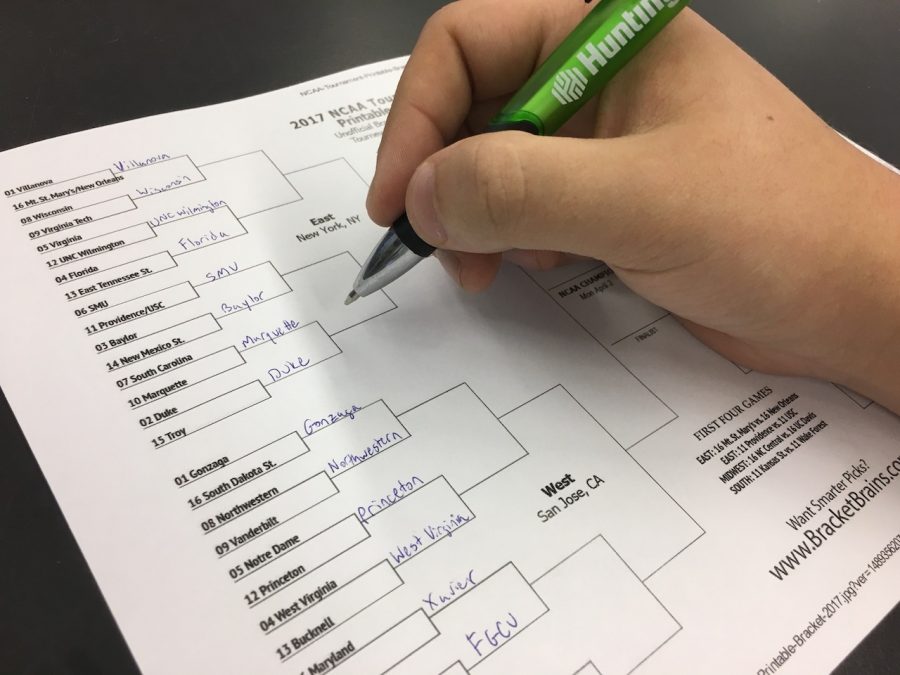 Millions of people filled out brackets this year and billions of dollars will be wasted watching the games.

What do Cinderella, Gamecocks, Musketeers, a big dance and Phoenix all have in common?

They’re all part of the NCAA Tournament, better known as March Madness. The Division I men’s basketball tournament started on Thursday, March 16 and will continue until the championship game on April 3.

You may have heard students and even faculty members across campus complaining about how their bracket got busted by an upset they didn’t see coming. They are probably one of the tens of millions of Americans who filled out bracket trying to predict the winners of all 63 games during the tournament. Many compete in office pools or with friends to see the best prognosticator is. No one expects to be perfect—there’s a one in two billion chance of that happening—but they all expect to be right. Bragging rights and cash are on the line.

It’s expected that $10.4 billion will be bet on this tournament. For some perspective, that is the same amount as Ford’s profits in 2016. An additional $4 billion will be lost in unproductive workers secretly watching games. Luckily for Case Western Reserve University, the first two rounds of the tournament were held over Spring Break when very few students remained on campus.

As for the actual tournament itself, the first round featured very few upsets. Though there were quite a few close games, the better seeded team won 27 out of the 32 games (84 percent). All of the first, second, third and fourth seeded teams advanced past the first round.

It was in the tournament’s second round that the normalcy of madness was restored. The No. 1 overall seed and defending champion Villanova University Wildcats fell to eighth seeded University of Wisconsin-Madison. Second seeded Duke University, a perennial favorite, lost to the seventh seeded South Carolina Gamecocks. Those two early losses alone ruined a vast majority of brackets. Of the 18 million brackets submitted to ESPN, 13 percent had Villanova winning the title and 12 percent had Duke cutting down the nets. More than 50 percent of entrants had either the Blue Devils or the Wildcats in the title game.

To add to the madness, two three seeds fell as well. The University of Louisville lost to seventh seeded University of Michigan and Xavier became the only double digit seed to make it past the second round, as they defeated Florida State University.
Results from the first games of the Sweet 16, the third round of the tournament, were not available at press time. Following the Elite Eight on March 25 and 26, the two national semifinal games take place on Saturday, April 1 in Phoenix.