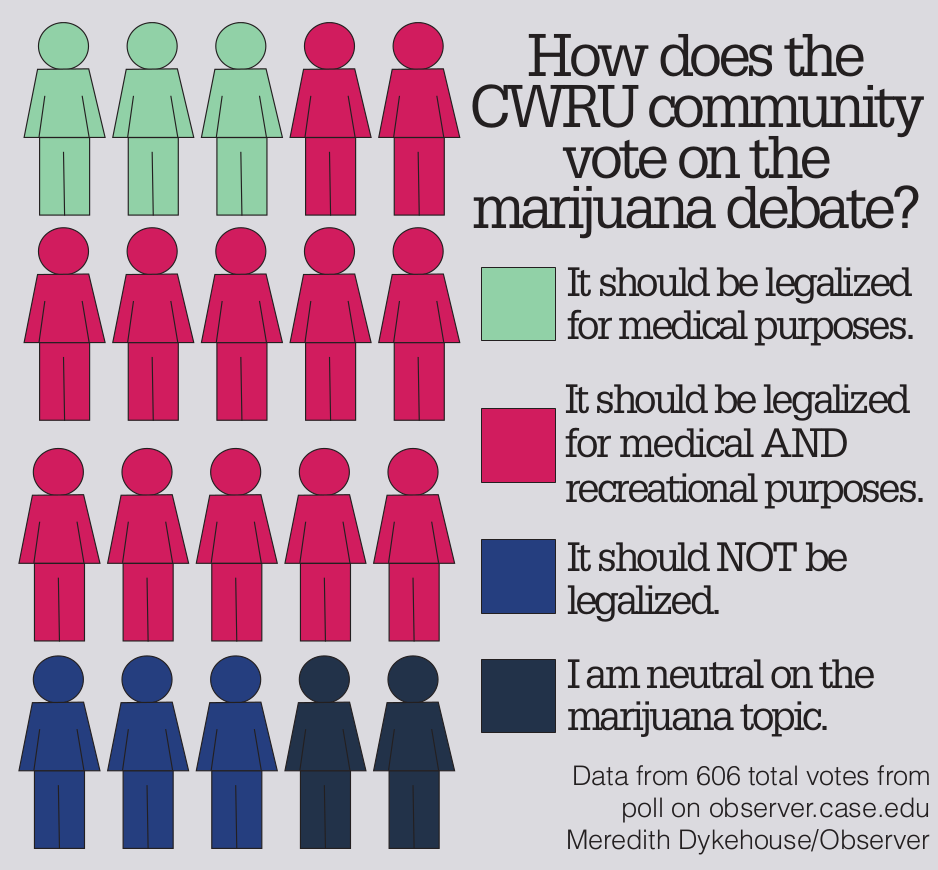 The DEA classifies marijuana as a Schedule I drug with high potential for abuse and no medical value. Urban Dictionary classifies it as “God’s gift to mankind.” The arguments for and against the legalization of marijuana, one of the most popular recreational illegal drugs, have been the focus of media attention for years now, but, last week the debate was brought onto Case Western Reserve University’s campus.

On Sept. 12, in the CWRU School of Law’s moot court room, visiting professors from all over the United States discussed the multi-faceted issue, focusing on how federal and state law are at odds on the case.

Baude argued that the recent legalization of recreational marijuana in Colorado and Washington thus has no executive enforcement. Although there are memoranda that residents of these states must follow to prevent breaking federal law, Baude argues that these can be changed easily, leading to a lack of stability in marijuana policy.

Julie Hill, a professor of law at the University of Alabama, said that another problem with marijuana legalization is the tense relationship between marijuana dispensaries and banks. Dispensaries in Colorado and Washington have difficulty convincing banks to accept their accounts.

Some banks operate under federal rather than state laws, which means that they cannot accept these accounts. For others, the risk of accepting them is just too high.

This risk includes a risk to their reputation. As Brannon Denning, a professor of law at Samford University, argues, banks don’t want to be associated with stoners, who he said are stereotyped as “unproductive” people who frequently “eat pizza.”

There is also a risk that the dispensaries won’t abide by the law, selling to buyers who are under the legally required 21 years of age. Steven Davenport of Carnegie Mellon University said that, while youth access is a problem, there are ways to avoid it. Since most youth would buy from older friends, a marketing campaign aimed at preventing adults from selling marijuana would help to reduce risk.

Despite these problems, though, support for legalized marijuana is still growing. Angela Hawken, a public policy professor at Pepperdine University School of Public Policy, said that favorable public opinion for the cause has been increasing, especially for medical marijuana use. However, Hawken stressed that decisions should not be made on public opinion alone, and the international reaction must also be taken into account.

The United States is a signatory on an International Narcotics Control Board treaty that says it won’t allow marijuana usage except for medical and scientific purposes. Colorado and Washington’s new laws disregard the treaty, and, although there have been no consequences yet, it is a possibility, as Uruguay, another signatory on the treaty, was penalized when they legalized marijuana.

Although arguments for both sides of the issue were presented at the panels, no solid conclusion on the issue was reached. In Ohio, two bills have been proposed by Representative Bob Hagan that aim at lessening restrictions on marijuana. HB 153 would legalize medical marijuana, and allow patients’ caregivers to grow the drug. HJR 6 would decriminalize marijuana and make it legal for adults over 21 years of age to use recreationally. Both bills have been sent to hearing committees, but neither has advanced past that stage.