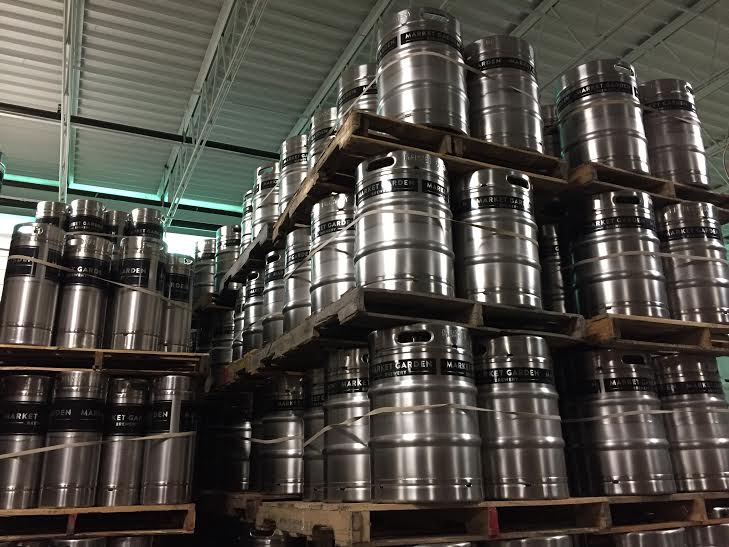 The clean and bright facility's beer will soon be available at local bars and stores.

Sam McNulty, owner of several bars and restaurants in Ohio City, opened Market Garden Brewery in 2011 with co-founder Mike Foran. Foran dreamt of opening up a “world-class production facility” one day. Together with Mark Priemer and Andy Tveekrem, brewer at Market Garden, Foran created a facility to remain in the booming market district in Ohio City, which sees two million visitors each year.

Tveekrem has been brewing at the production facility since February and patrons will find Market Garden beers Progress Pilsner, Prosperity Wheat, Citramax and a seasonal Hellamango Mango IPA in stores. Tveekrem has years of experience after brewing at Great Lakes Brewing Company for nine years and Dogfish Head Craft Brewery for five years.

The production facility is absolutely beautiful, with tons of windows so market patrons can easily check out what is brewing after shopping. Also it was one of the cleanest and most well-organized breweries I have ever seen. Several labs are present—and part of the tour—so patrons can see the efforts toward quality assurance and consistency Foran’s team makes.

The site of the facility was once occupied by old homes dating from the early to mid 1800s before becoming a Hungarian social hall. Foran noted how the facility maintains some of the original windows to these homes, which provides a celebratory mix of past and present Ohio City.

He also noted that many staff members at the production brewery had once worked as bartenders or servers at McNulty’s restaurants or neighboring establishments. Foran believes it is important that his staff sees the product come full circle by actually serving the beer to customers along with making it in the brewery.

The retail shop will be opening in May, in time for the historic additional Sunday opening for the West Side Market, a main destination for both Clevelanders and guests to the city. This new brewery will be a destination for anyone who wants to know how their favorite brew is made or who simply want a great beer.