Marriage Pact comes to CWRU. What is it all about? 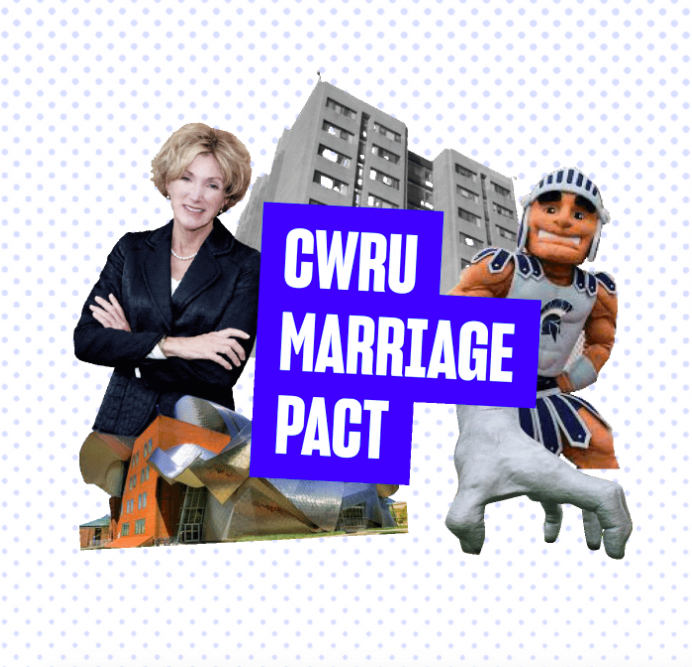 Marriage Pact has come to CWRU for all us lonely singles out there, along with those just looking for a friend.

Students at Case Western Reserve University may have seen a strange advertisement in the Undergraduate Student Government newsletter this week. Or perhaps a barrage of Instagram stories promoting a certain saucy website. Or potentially an in-class announcement saying that “We’ll find you a crush besides Daddy Drew”—referring to popular chemistry professor Drew Meyer. No, your eyes were not deceiving you. Despite our nerdy and socially detached reputation, there is indeed a dating website spreading around CWRU and hundreds, if not thousands, are signing up.

“Look around. College is the best place to meet ‘the one’—but we’re not gonna be here forever. The CWRU Marriage Pact is here to give you the perfect backup plan: Take our questionnaire and we’ll find your best match on campus. We can’t promise you a match made in heaven, but we can promise a match made via groundbreaking algorithms and a little linear algebra. Swoon!”

That’s how the CWRU Marriage Pact website introduces itself, part of a nationwide project that spans college campuses, all with the aim of connecting students with peers that are most compatible with them, all using an algorithm centered around stable marriages. Originating at Stanford University, students there used the Nobel Prize-winning Gale-Shapley algorithm, which originally aimed to solve both the college admission problem and the stable marriage problem by pairing people based on their stated preferences and accounting for all different factors, including the truthfulness of the participants. Starting in 2017, the initiative began as a basic final project for an economics class, using the algorithm with a number of modifications intended to fit it better to Stanford’s culture, which was sent out to students’ unsuspecting email inboxes before unexpectedly catching on. Now the Marriage Pact is done every year across 55 universities, and CWRU is now the 56th one.

The project came to fruition as the website launched on Monday, Sept. 15. With over 50 questions, all of which students rank on a scale from 1 to 7 based on how much they agree or disagree, students are then ranked based on their preferences. All data is collected completely anonymously, with no human ever looking at student responses. Questions range from “Would you be comfortable with my child being gay?” to “Do you prefer being truthful to your friends or protecting feelings?” along with more innocuous questions such as the respondent’s field of study and their preferences for their partner’s drinking habits.

Despite all this, there is a bit of an inherent oddness to a dating website being advocated for by members of our student government, though some are adamant that it is not just a dating website.

“It’s just something fun for students. It’s nothing serious,” Wang said. “The basis behind it is [that] getting people a match doesn’t necessarily have to be a significant other, it could just be a best friend.”

“There’s this question at the end. It’s like, ‘How single are you?’ So people who are very single can get paired with someone who they can take more seriously. So for people that aren’t single, they’re still able to fill out the surveys, it’s just that they’ll get matched with a best friend instead. So despite the name ‘the Marriage Pact,’ it’s not exclusive to just someone you can date.”

Since rolling out, over a thousand people filled out the form within a day, almost 20% of the undergraduate student body, though those organizing this initiative hope to get at least half of campus signed up by the end of the week.

“One of the problems that we’re currently having, and it’s a pretty common problem that a lot of universities that use ‘Marriage Pact’ have been facing is that the form has been traditionally filled out more by heterosexual women. So far heterosexual women are filling it out with the outcome of wanting to find a heterosexual man to match with them, it’s hard to get because there are more women than men taking the form,” Wang explained. “So one thing that we need to do towards the end of the week is close the gap and to encourage as many men on campus to fill it out so that every woman will get a match.”

This experiment only spans this week, with the survey closing on Friday, Sept.17, and matches coming out on Monday, Sept. 20 after the algorithm runs this weekend. Students who fill it out will be contacted by email with their match’s information, along with details on their compatibility. Through it all, those at Stanford have continued to meet with our USG representatives as the group tries to shift marketing strategies to make sure that as many people take the survey before the Friday deadline.

“The people from Stanford helped us overwhelmingly with how to market the whole process,” Lin said. “They were really attentive to what the campus culture here is like and they try to get feedback from each school they launch this [sic], including CWRU.”