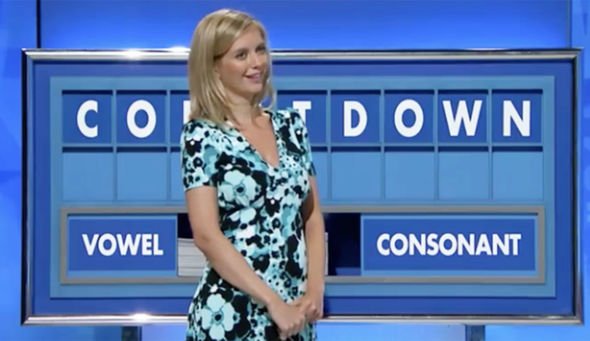 Around 3 a.m. one Saturday night, I sat on my couch watching episode after episode of the British late night comedy game show “8 out of 10 Cats Does Countdown.” It’s an amalgamation of two other famous British game shows and it’s absurd. The show is inspired most by “Countdown,” in which contestants receive nine random letters and try to make the longest word out of them in 30 seconds. “8 out of 10 Cats Does Countdown” incorporates British comedians to provide some not family-friendly fun.

But all of this is really only important because of one of the hosts, Rachel Riley. She’s a young, attractive woman with an advanced maths degree who plays the Vana White of the show. But  more importantly, she also solves and checks the math problems section.

“8 out of 10 Cats Does Countdown” always begins with ‘introducing’ the guests and hosts for that episode, and it is usually more of a roast than anything. Rachel Riley is often roasted for her poor turn on “Strictly Come Dancing” or for being vastly overqualified for the show, but more often than not she’s roasted for liking math. Specifically, for doing math for fun in her free time.

And, that’s what got me thinking. I started remembering about all the times I, as a person who does not enjoy math in a fun way, have teased someone I know for voluntarily expressing an interest in math or admitting to doing math in their leisure time. This is usually done lightheartedly, but my immediate reaction to someone saying they’ve done math for fun is confusion and a grimace.

There is an interesting dichotomy here at Case Western Reserve University, with 59% of the undergraduates in a STEM program. This means the majority of the student population won’t be surprised, or really judge someone if they enjoy math or science. Furthermore, an interest in math that then bleeds into your chosen career path isn’t usually an object of ridicule at this school—or really at all in American society. It is the idea of loving math enough to do it when not working that is “weird.” For some reason, STEM fields have become directly related to their capital advancement and peeled away from interest or passion.

However, for the other 40 or so percent of us here—especially those of us in the arts and the humanities—people might understand our interest in these subjects as a hobby, but laugh at us for choosing these disciplines as our major. Even though most of the time when I say “I’m majoring in theater” people react positively, that isn’t always the case. And the fear of that, as well as the expectation put upon us by this institution and society at large, makes me embarrassed to be pursuing my interests.

It’s as if one’s interests must be aligned with their capital advancement. One should only pursue passions that are standardized as having earning potential by our society.

It is precisely the overlap of these societally deemed priorities that lead people to judge others for what they do with their time. Math is societally deemed as a high priority, but one’s interest level should not extend to outside enjoyment. Conversely, arts are societally deemed a low priority and, thus, any involvement in them must be purely for recreation.

On this campus and among friend groups, one rarely feels ashamed of their hobbies for being too “nerdy.” Instead, it is because the interests are too “juvenile” or “cerebral,” and are thus deemed irrelevant for any level of interest.

For example, I greatly enjoy watching the old Power Rangers series—which some might consider juvenile—and being incredibly extra by documenting the Rangers over pages and pages. And while at this point I’ve told enough people to become comfortable with my interest, sometimes I think about what I’m doing and feel deeply ashamed.

I also have been too embarrassed to tell most of my friends that I’m learning French. Not because there is something inherently embarrassing in that, but because I am doing it after I enjoyed a particular French film and hope to one day watch it without subtitles. As this feels like a poor reason to learn an entire language, I’ve elected to not tell anyone.

The perception of hobbies can often lead people to abandon their favorite pastimes. This isn’t some huge hard hitting problem—people making you feel embarrassed about your nerdy, artsy or random interests—but when it starts to dissuade you from taking part in those interests, I think it’s a shame.

I have found that many of my closest friends do not appreciate or understand my interests.

But even though they might never understand why I made a 50-slide powerpoint for fun, showing at least minimal interest can mean a lot. Even something as simple as “I don’t get this, but I respect your passions” can start to eat away at the shame monster telling me to never enjoy myself again.

This shame is something that’s very easy to change and can make a world of a difference in your day to day interactions with your peers and friends. Distancing yourself from societal standards of investment will also change your perspective on the rest of your world.

So the next time one of my friends tells me that they beat their record on the NYT crossword, they spent a weekend figuring out a math problem for fun, or that they binge-watched the entirety of “The Bachelor” and know every contestant by heart, I will be supportive and excited that they are doing what they love.