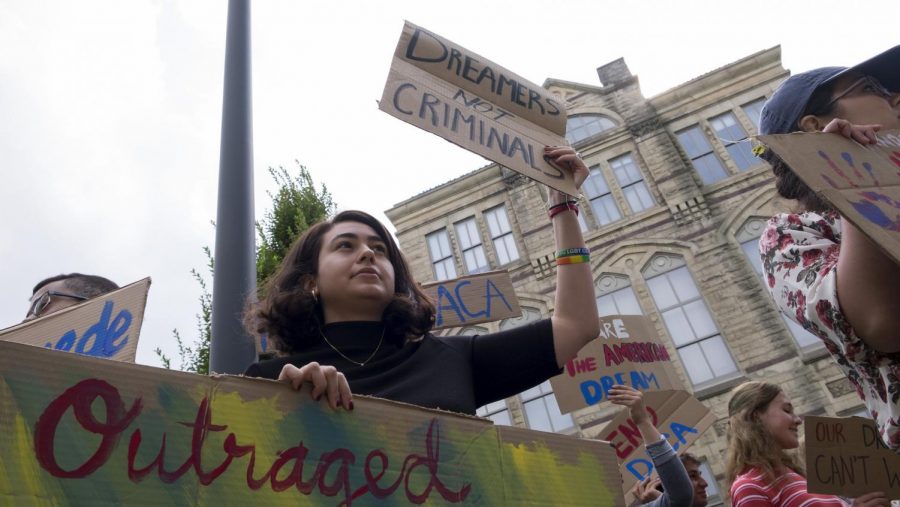 Here’s a little morsel of information many people seem to forget: immigrants are people. They’re human beings who love, fight and live just as you do. No, they are not rapists or murderers or criminals. No, they are not a horde marching towards the United States border intent on pilfering jobs and pillaging neighborhoods. Let me repeat: they are human beings.

Discourse on immigration policy and conversations about immigrants themselves seem to paint a different picture, though. Think about the phrase “catch and release,” for example: are immigrants fish? Are we hunting them down for pleasure and mercifully letting them go like hunters who feel some rudimentary, pitied concern for their prey?

What about “illegal alien?” Are immigrants so different from our fellow citizens that we can only conceive of their existence as a kind of extraterrestrial sentience?

Immigration policy is not the only realm of discourse to be marred by dehumanizing language, though. This past week, I sat down with Case Western Reserve University Professor of Philosophy Anthony Jack to talk about dehumanization. While our initial focus was supposed to be immigration, it became clear to me by the end of our conversation that dehumanizing language is far more widespread and pernicious than I previously thought.

For those unacquainted with dehumanization, here’s a quote describing the concept from my interview with Jack: “Depictions of others as animalistic in nature is a strategy for dehumanizing … and is a necessary precursor to atrocity.”

This is a sensible characterization of dehumanization, at least in a historical sense, because the most commonly referenced (in my experience) instances of dehumanization are the Holocaust and the internment of Japanese-Americans following the bombing of Pearl Harbor in World War II. In both these cases, the out-group (Jews or Japanese-Americans) was characterized as non-human, as animals—rats, roaches, vermin, etc.

As Jack points out, what he calls “the medicalization of human bodies,” viewing human beings as walking masses of cells and flesh, has also contributed to the increased prevalence of mechanistic dehumanization. We agreed this can be at least tenuously linked to low empathy levels and modern technological advances like social media.

The language we use to dehumanize others, Jack mentioned in our interview, is often the metaphors that are most available to us. When we so often interact with our friends and acquaintances via technology, and when we interact on almost a daily basis with digital assistants—things like Apple’s Siri and Amazon’s Alexa—it is not at all surprising to me that mechanistic dehumanization is becoming more popular.

In my opinion, though, the increased prevalence of mechanistic dehumanization—one example of which is reproductive rights, which recently seems to involve male politicians regarding female bodies as baby factories which they must oversee for fear of human rights violations—has only risen alongside the continued salience of animalistic dehumanization.

Jack stated near the beginning of our conversation that the apparently non-partisan adoption of phrases like “catch and release” hints at a general lack of awareness of what it means to dehumanize someone. Most people can clearly identify what is wrong about objectifying a woman’s body, but it seems that referring to immigrants as animals or aliens has received less attention.

Dehumanization as a technique for ignoring the plight of the Other (the out-group) is not new, but it is widespread and it is pernicious. While there certainly is a way to talk about immigrants without dehumanizing them, I don’t intend to preach my purity—I am just as guilty as anyone else of using subtly dehumanizing phrases like “catch and release.”

However, just as combating racism and sexism must begin with the painfully simple step of accepting that it is happening (something many Americans somehow still seem to struggle with), the path to ending the dehumanization of immigrants begins with the seemingly simple first step of acknowledgment.

Thomas McCall is a second semester fourth-year student studying cognitive science, philosophy and math. Check out his other poorly written pieces on his Medium blog.